Duck Hunt for stroke victims, a shopping cart that follows you around, a new and improved way to learn sign language, and more from Microsoft's student ideas competition 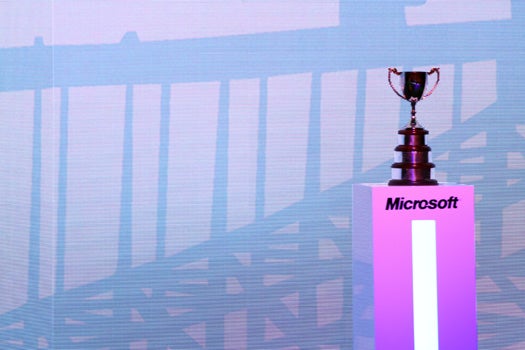 This year’s Imagine Cup, a dream-of-the-future student competition in which “technology helps solve the world’s toughest questions,” was held in Sydney. The opening ceremonies were the mixture of ostentatious congratulation and childlike enthusiasm I have come to expect from the Imagine Cup. For a while, it was like Oprah’s Favorite Things in there: “Everybody gets a new Nokia phone! Four of you get to go to a Microsoft developer’s conference! Everybody gets Bill Gates’s signature on a certificate!” The phrase “change the world” was used 10 times. I counted. And then four confetti cannons went off.

But we were there for the ideas, and the ideas largely came from one dominant piece of technology: the Kinect. It’s not that surprising, both because it’s a Microsoft creation and because it is, without a doubt, one of the most innovative pieces of technology ever made. Not just in gaming–period. And the students have embraced it. 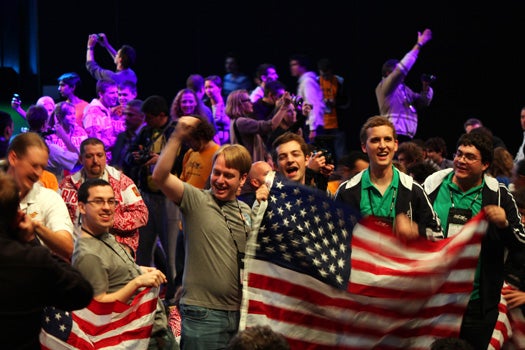 Team Whiteboard Pirates, from the U.S., has created a game for the Imagine Cup’s Kinect Fun Labs competition that makes rehabilitation for stroke victims a little easier and a lot more fun. Their game “Duck Duck Punch” was designed in conjunction with a stroke therapist, and aids with upper arm therapy, much of which involves reaching. The trick with stroke rehabilitation is that it’s not really the victims’ arms that need rehabilitating. It’s their brains. The muscles themselves are capable of making the movement, but the brain believes it can’t. The game draws on the idea of “mirror therapy,” in which the brain, seeing an image of a moving limb, believes the body is making that motion, even if it isn’t. Traditionally used to help treat phantom limb pain, research suggests it may help stroke victims with limited range of motion as well.

Duck Duck Punch tracks the user’s arm with a Kinect. Birds pop up in different places on the screen, and the user has to reach out and punch them. Harder reaches are worth more points. But patients aren’t able to cheat by lunging their upper body forward to close some of the distance—the shoulder is anchored.

I got to try the game out at Saturday night’s student showcase. It’s a lot like a carnival shooting gallery, except you slap the targets instead of shooting them. This was intentional, Whiteboard Pirates team member Patrick Dukes tells me. Most stroke victims are 55-70-year-old males, and the team wanted to create a game using modern technology that would still be appealing to an older generation. “It’s based on carnival games they might have played as children,” Dukes says. Several patients at the Medical University of South Carolina’s stroke center have tested the game, and the response has been quite positive, according to Dukes. I will say that it was pretty satisfying to reach up and give that seagull a smack, especially after being divebombed by gulls along the Sydney Harbor all day.

Where the mirror therapy comes in is that the game is scalable—therapists can set the maximum reach to the range of motion their patients are capable of, and Duck Duck Punch will register that as a full arm extension. So even if the patient can only reach a few inches, the screen shows a completely extended arm. And if some reaches are too hard, the therapist can disable certain regions of the screen, keeping the targets closer to the center.

“We don’t want to replace therapists,” Dukes says. “We just want to give them another tool to put in their toolbox.” 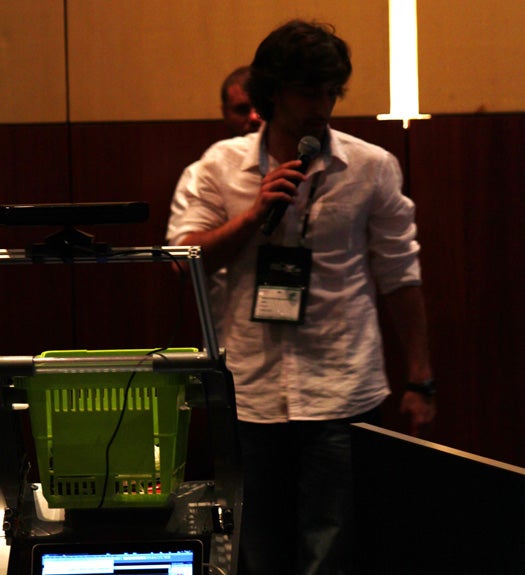 A member of Portugal’s Team wi-GO demonstrates how their Kinect-enabled shopping cart follows users around.

Team Whiteboard Pirates is not the only group at the Imagine Cup mining the Kinect’s potential to improve quality of life for disabled people. Portugal’s wi-GO (which we covered on this site in an earlier stage of development) is a finalist in the software design category. The wi-GO idea started 12 years ago, says team member Luis de Matos, when his doctor told him, “I give you your new best friend: Whether you want it or not, you will have this wheelchair.” Since then, shopping has been difficult for him, since it’s tricky to push a cart and a wheelchair at the same time. He usually brought his girlfriend with him to the grocery store for assistance.

When Microsoft debuted the Kinect, de Matos thought it would be a good way to track people as the move around a grocery store, without them having to wear a sensor. So he and the rest of team wi-GO set about developing a shopping cart that follows users around the store, leaving their hands free to drive their wheelchairs. Gesture recognition ensures that the wi-GO doesn’t get distracted and start following other shoppers, and distance sensors keep it from accidentally running into people. It’s effective—during the team’s final presentation, the wi-GO started following around one of the photographers who got too close.

Kinect was everywhere at the Imagine Cup. Another software design finalist, Team Symbiosis from Greece, designed a comprehensive system to help treat Alzheimer’s patients, part of which involves Kinect-based games that help improve patients’ memory, provide music therapy and more. Team Make a Sign from Belgium developed a software program that helps you learn sign language. Speech therapists and professors can record videos of themselves signing using a a motion capture glove, then friends and family of deaf people, or others learning sign language try to emulate the gestures, and the Kinect registers if they match the motion correctly. The D Labs from India developed a group of games that help children with dyslexia practice their concentration, orientation and language skills and tracks their improvement over time.

This idea is catching on outside of the Imagine Cup bubble as well. Ikkos Training, a company that participated in Microsoft’s recent three-month Kinect Accelerator program, uses an approach similar to mirror therapy to help train athletes and spark their muscle memory. Users wear a pair of goggles that shows them a loop of the correct motion, be it a swimming stroke or a golf swing. This “downloads” the information onto their visual cortex. Then, when they try it out for themselves, the Kinect measures their improvement.

According to Dan’l Lewin, corporate vice president for strategic and emerging business development at Microsoft and mentor at the Kinect Accelerator program, Michael Phelps used Ikkos’s system when he was having trouble with his freestyle. “It wasn’t like he had a stroke, it wasn’t like he was all that out of shape,” Lewin says. “He had just lost a little something and just seeing it in that moment let his muscle memory kick back in.” If the Kinect works as a little fix, it might be able to scale up to more sizable results for patients in need of rehab.

“There’s some real science behind being able to immerse yourself in visual feedback as the aspirational goal,” says Lewin. “There’s just so much room for exploration and impact in that area. Kinect is the tip of the iceberg.”

This is the 10th anniversary of the Imagine Cup. Based on the retrospective of Cups past that they showed at the opening ceremony, and my memory of last year, what has changed the most is that the event seems to be shifting away from being a technology competition and towards becoming an incubator for business.

The competitors seem to share that entrepreneurial spirit. James McNamara, one of the members of last year’s winning software design team, Ireland’s Team Hermes, was back in town to share some words of wisdom at the opening ceremonies. His team has turned their idea—an in-car device that tracks and rewards you for safe driving—into a company called CleverMiles. They’re currently looking for partners and investment, and McNamara stresses the importance of learning to pitch. “I’m pitching to my corn flakes when I get out of bed in the morning,” he says.

If that’s what it takes to get these ideas off the ground, we’re fine with it.