The Secret Life Of Produce 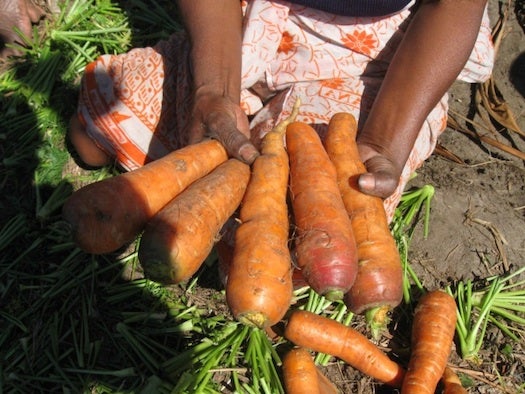 Ever planted a potato that sprouted after you brought it home from the store? If so, you already know that your grocery-store produce is still, in many ways, alive. (If not, you should try it! Fun and frugal.)

Plant parts, such as roots, branches and stems, are able to perform some metabolizing independently. For example, parts are able to exchange gases even while separated from the rest of the plant. That’s why you can pick a rose off its bush and keep it in a vase for a few days, but you can’t exactly do the same with, say, a caterpillar leg.

Now, a team of biologists has determined that sold produce still responds to cycles of light and dark, the way whole plants respond to cycles of day and night. Those veggies that were exposed to light-dark cycles were more resistant to insects and produced natural chemicals, normally made for plant defense, that may be healthful for humans.

The biologists, from Rice University in Texas and the University of California at Davis, performed a series of experiments on Arabidopsis thaliana plants exposed to 12-hour cycles of light and dark. They found that the plants make natural insect repellant chemicals, called glucosinolates, during the light hours.

The glucosinolates seemed to discourage caterpillars from munching on leaves. Plants grown in light-dark cycles that matched the caterpillars’ got munched on less than plants grown in light-dark cycles that didn’t match the caterpillars’. That’s because the out-of-sync plants thought it was “night” when the insects thought it was “day”—so the plants weren’t making as much glucosinolates as they would during the day, but the insects were awake and eating away.

The biologists then tried the same experiment, but instead of using whole plants, they used circular discs cut out from cabbage leaves. It turned out that the discs, even though they were cut off from the rest of the plant, still made glucosinolates in day-night cycles, as long as they were exposed to alternating periods of light and dark. And the glucosinolates worked. Caterpillars ate 20 percent more of out-of-sync cabbage leaves than they did of in-sync cabbage leaves. Caterpillars also ate more of cabbage leaves that were kept in constant light or darkness, with no day-night cycling at all.

The effect also works with other foods the biologists tested, including lettuce, spinach, zucchini, sweet potatoes, carrots and blueberries. These plants aren’t in the same family as Arabidopsis and cabbage, so they don’t make glucosinolates, but they must make another natural insect repellant, the biologists wrote.

One preliminary study has suggested glucosinolates may be part of the reason why people who eat lots of cruciferous vegetables, such as cabbage and broccoli, have lower rates of cancer. If grocers maintained day-night cycles for their wares, they might maintain more healthful chemicals for shoppers to consume, the biologists wrote.

We’re not optimistic that grocery stores would be willing to make major changes for the sake of some fairly unstudied nutrients. Nevertheless, it’s cool to know that all those carrots lying quietly on their shelves are actually doing live plant biochemistry while you’re pushing your cart by.

The Texan-Californian team published their work today in the journal Current Biology.