They felt the need for speed. 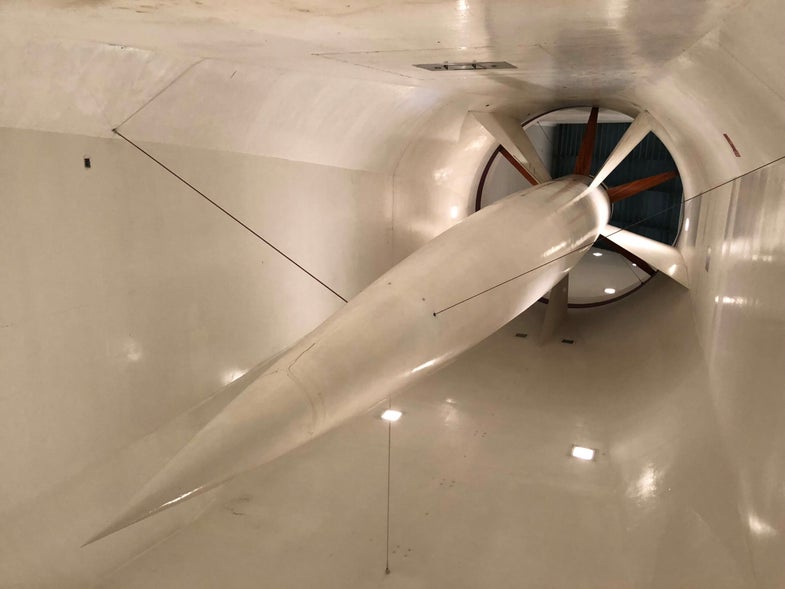 Reaching speeds of over 80 mph, American athlete Chris Mazdzer zoomed feet first down the curvy luge track in South Korea on Sunday, coming in second place. That’s a historic first for the U.S. team, as no man had won a medal in the male singles luge event at the Winter Olympics before Mazdzer scored that silver.

The key piece of equipment at the San Diego Wind Tunnel is a 20-foot fan, powered by a 2,250 horsepower motor, that accelerates air up to 270 miles per hour. (Technically, that makes them a “low-speed” wind tunnel.) The air travels in a loop from the fan, through the test section—which is narrower, to help the air speed up, like water going through a canyon—and then eventually returns to the fan, saving energy. The facility, which dates back to 1947, has its roots in the aerospace industry. “We’ve tested virtually every airplane that Boeing flies here,” says Martin Dine, the tunnel’s general manager. Because the testing space is just 8 by 12 feet by 15 feet long, aircraft makers use scale models of their craft.

But in the modern era, Dine says, they’re throwing breeze at more than just model planes. “Anything that has wind blowing across it, we’ll test,” he says. That list includes items like solar panels, scale models of stadiums, even a McDonald’s sign. Then there are athletic pursuits: sports like luge, bobsled, and biking, in which the athletes want to go as fast as possible and reduce the drag of their gear. Dine estimates more than 500 athletes have come through their doors in search of wind to test factors like the position of their body and their uniforms.

“All of them are basically on a quest for speed,” he says. “The thing that they’re very, very interested in is their drag coefficient—[wondering] how can they make themselves the most efficient that they can through reducing drag?”

That’s key in a sport like luge, where the times are measured to the thousandth of a second. In December, officials from the U.S. luge team and one from the United States Olympic Committee visited the wind tunnel to test out uniform material. That involved one of them, a coach, donning different uniforms and trying them out in the wind tunnel, guinea-pig style. “They had several different types of uniforms that they were considering using,” Dine says. “So we put all of those uniforms through some testing.”

“We taught them some things about the fabrics that they were using,” he adds. To keep the person wearing the different suits in the same position and minimize variables, they used a laser guidance system, projecting the laser’s light onto a specific spot on the helmet.

Whether the object being tested is a person in a form-fitting uniform on a luge sled, or anything else, it’s mounted in the wind tunnel on an important piece of equipment called a balance. It’s that sensitive instrument, below the floor, that allows the wind tunnel to measure the drag that the athlete, or piece of equipment, creates in the wind. And to get the test object out of a turbulent wind area called the boundary layer, which is about two-to-three inches deep, they use a splitter plate to add height above the balance.

One of the luge officials who visited the wind tunnel in December was Gordy Sheer, the director of marketing and sponsorship for USA Luge. He’s not saying much about their final uniform choice, though. “One interesting thing we keep learning over and over again is that the requirements for our sport are pretty unique,” he says, via email. “What may work for one speed sport may not work for luge. We have also zeroed in on a few of those unique properties.” Alas, he says, the details are secret.

I’m still processing what happened last night. It honestly doesn’t even feel real yet! All I know is that I have an amazing group of people in my life that stick with me even when times are tough and sharing this high with them is one of the best ways I can say thank you back. It honestly has taken a village… actually make that a few villages to put me into the position where when I was on the handles for that fourth run everything just felt right. I wasn’t nervous, I was just ready and I think you can see a little smile through my game face because for some reason I knew I could do it even before I began that run. It’s been a hell of a ride and all I can do is say thank you to all the people who supported me and helped me develop as a person along the way. To my amazing teammates who always push me to be my very best. To my coaches who always believed in me and would stop at nothing to get me on that podium. To my incredible family who has been my emotional rock and has the unfortunate task of always having to deal with me. To my friends around the world who support my crazy ways! All I can say is thank you and we finally did it!!!! #teamusa #itsforamerica #pyeongchang2018 #silver #feelslikeawin #olympic #medalist #first #american #menssingles #medal #believe #achieve #inspire #icamesecond