The complicated, century-long relationship between swimming pools and chlorine 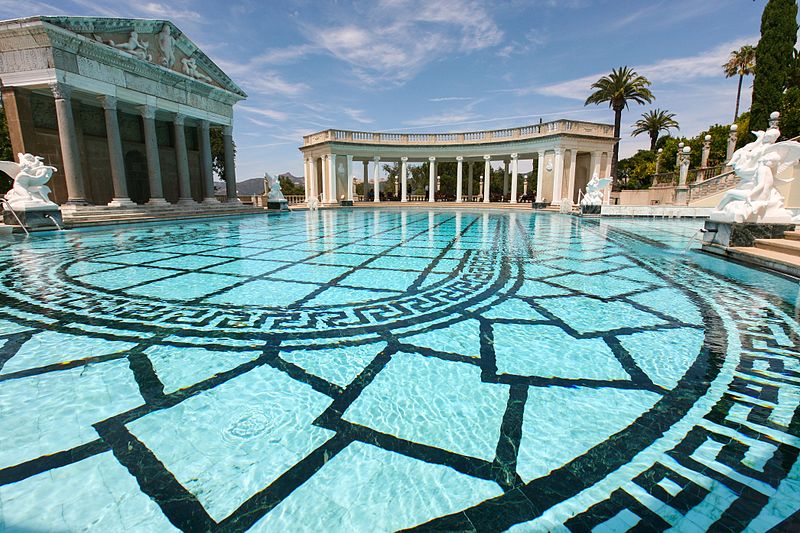 Americans love to swim. We’ve won one-third of all Olympic medals for swimming—more than any other country in the world. Founding father Benjamin Franklin is credited as the inventor of swim fins. And the United States has approximately 10.4 million residential pools. Hundreds of thousands more are owned and operated by cities for community use, not to mention the gyms and racket clubs that serve dues-paying members.

But the modern, large-scale, sanitized, and relatively inexpensive swimming pools we know and love today emerged only a century ago, thanks to advances in chemical sanitation and filtering technology. One academic paper (which is, at times, laugh-out-loud funny) from Montclair State University chemist Kevin Olsen went so far as to divide the history of pools into “BC,” or “before chlorine,” and after.

However, pools—and the tools we use to keep them clean—aren’t perfect. Seeking a cleaner, more comfortable swimming experience, the pool industry has tried to innovate in recent decades. The growing trend of “saltwater pools,” which rely on salt chlorinators instead of traditional sources like household bleach, is one byproduct of this continued tinkering. But despite our best efforts, we just can’t seem to quit hypochlorous acid (the chemical name for common pool chlorine).

Swimming for leisure in lakes, rivers, and oceans is probably as old as humanity itself. And man-made pools, often for bathing, date back to ancient Indus River Valley civilizations. But in the late 19th century, people became concerned that bodies of water—natural or artificial—could be plagued with disease. They weren’t wrong, but their methods weren’t necessarily effective. Without a chemical solution, people built pools on downward slopes to drain the water, and frequently replaced the liquids in an attempt to flush out impurities.

That all changed around 1911, according to Olsen, when Brown University tried to sterilize Colgate Hoyt Pool, a heated, marbled crown jewel on the Providence, Rhode Island campus. A chemist added to the pool bleaching powder, which had risen to prominence in recent years as a method for treating drinking water, in the hopes of eliminating the pool’s brownish hue. “The results were spectacular,” Olsen writes. “Bacteria counts went from 700 [parts per million] to 0 in only 15 minutes.”

It didn’t take long for these methods to spread. Laws regulating the sanitation of pools appeared on the books in just a few years. But the modern swimming pool’s other essential component—the filtration system—took a few more decades. It wasn’t until the end of World War II, according to Olsen, that diatomaceous earth filters, which rely on powdered rock to capture fine particles in the pool water, became popular. And skimmers, which are built into the pool and often mimic the appearance of a storm drain, only emerged in 1952; they’ve been trapping bigger pieces of debris like sticks or leaves ever since.

But by the 1970s, warning signs started to bubble up. (Or, as Olsen put it, “the first fissures in the summer love affair between chlorine and swimming” eventually emerged.) For one, chlorinating a pool can be gnarly, mind-numbing work, especially if you don’t have an automated system. People with manual pools still mix their own chlorine poolside, then walk the bucket around the perimeter, dumping the liquid cleaner as they go. Depending on usage, temperature, and other factors, homeowners have to repeat this process as often as once a day. They also have to measure algae, pH, and other indicators of pool health—and modify them with a second set of chemicals when things get out of whack. (No wonder it was in the midst of this repetitive task that Olsen came up with the idea for his research paper. “At the time, I had an above-ground pool in my yard,” he says. “And one night, I’m stirring chlorine into it, and I wondered, ‘who invented this?'”)

Even worse, when pool chlorine mixes with urine—as it often does—the chemical interaction generates troublesome compounds. Chloramines form when free chlorine compounds bond with urine or other chemicals. They’re the real source of that chlorine pool smell and can cause skin irritation, burning eyes, and respiratory problems. In fact, frequent swimming in chloramine-saturated pools appears to increase the risk of asthma and some allergies, according to the American College of Allergy, Asthma, and Immunology. The other toxic substance—cyanogen chloride—forms under similar conditions and can disrupt your body’s ability to utilize oxygen.

These risks may seem acceptable, given infectious disease is a possible alternative. But chlorine doesn’t even always do its job. Between 2000 and 2014, there were 493 outbreaks in pools, hot tubs, spas, and water playgrounds in the United States. Eight people died as a result. Norovirus, Shigella, and Cryptosporidium, all of which are found in human poop, caused the majority of these pool-based infections.

Over the years, chlorine alternatives—or at least what seem like chlorine alternatives—have gone to market. In 1919, according to Olsen, at least one luxury hotel was advertising ultraviolet purification. “No Chlorine, no Chemicals,” the ads said. And in the 1920s, pool owners dabbled in ozone, that carefully-regulated gas vital to our stratosphere, but a pollutant at ground level. The most successful system, however, is far and away the salt chlorinator.

In the late 1960s and early 1970s, a retired chemistry professor developed a new way to create and release chlorine. Instead of dumping bleach, calcium hypochlorite powder, or related chlorine compounds into the pool, this new system subsisted on salt. It now accounts for 35 percent of automatic sanitation systems in residential pools, according to internal data from the pool products company Hayward.

“As opposed to putting chlorine into your pool every week or every couple days, really the salt water general takes care of that for you,” says Jason Davila, Hayward’s product manager of chemical automation. “Not only does it provide a convenience benefit, but it also provides a more luxurious experience. People note the water feels silkier; you don’t have that chlorine smell or those red eyes that people get from traditional chlorine.”

The name “salt water pool” may conjure up serene, saline memories of the ocean, but Davila says these pools are about as briny as a contact solution. The ocean has a salinity level around 35,000 parts per million. Human tears are about 6,000 parts per million. And a Hayward pool is somewhere between 2,500 and 3,500 parts per million. To achieve the slightest hint of salinity, pool owners add a small amount of salt to the water, tabulated according to the gallonage of their pool. As a result, some proponents mistakenly claim these salty systems offer chemical free filtration. But, Davila says, even salt water pools need chlorine to stay clean.

On the Periodic Table of Elements, basic salt is classified as NaCl, or sodium chloride. When dissolved in water, salt breaks down into salt and chlorine. If you have a salt water filtration system and add salt to your pool, the NaCl is pulled through a special cell made of titanium plates coated in ruthenium, a powerful catalyst. The cell stimulates a chemical reaction, creating chloride ions. When oxidized, these ions form Cl2, or chlorine gas. In a final reaction, the gas dissolves in the pool water as hypochlorous acid, which cleans the pool water. “That’s how you go from traditional table salt to what we in the pool industry consider chlorine,” Davila says.

There are many claims made about the superiority of these salt water systems, but there’s little academic research to back it up, at least for now. Most of what we know comes from user experience. The notion that salt water pools are “silkier” or “softer” doesn’t come from a research paper, but from people swimming in salt water pools at resorts or neighbor’s houses—and, of course, from swimming pool marketing material. According to industry experts, the feel of a salt water pool likely has to do with osmotic gradients. Because the pool water is kept at a saline level similar to the saltiness of the cells in our body, it doesn’t dry us out, making the swimming experience that much more pleasant.

Similarly, saltwater filters are said to be less likely to redden your eyes or irritate your skin. While chlorine is chlorine is chlorine, delivery methods can shape our body’s response to chemicals, according to both Davila and Olsen. Because the sodium chlorinator is regularly producing and evenly distributing the cleaning solution, it’s not as harsh as one big dump of sanitizer every few days the traditional way. And, Davila adds, by continuously churning out chlorine, salt chlorination curbs the formation of irritating chloramines.

Olympic-sized or kidney-shaped, it’s clear that pools intersect with politics and economics, and regularly serve as real-life laboratories. Throughout history, we’ve been easily spooked by both disease outbreaks and the side effects of chemicals made to manage them. And we’ve barely begun to imagine what the pool of the future could be. But at the end of the day, whether you’re in a salt water system or a traditionally chlorinated pool, there’s nothing quite as soothing as a swim.