This is how, and why, explorers go cave diving 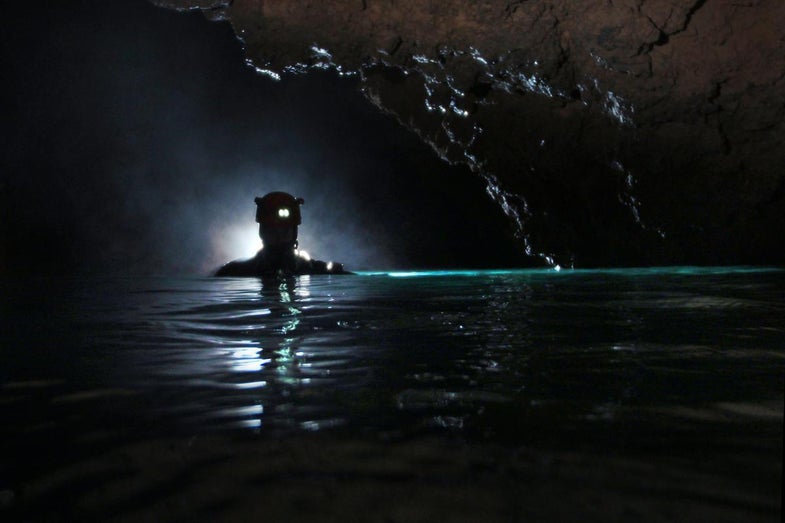 [Update on Tuesday, July 10: the entire soccer team, plus the team’s coach, have safely made it out of the cave.]

With 12 boys trapped 2.5 miles deep in a cave in northern Thailand, one likely way for them to exit the winding chamber is for them to dive through the flooded portions—with help from rescuers.

Such cave diving, as it’s know to professional cavers, can be dangerous. That point was hammered home Friday when a rescue diver in Thailand, Saman Kunan, died, reportedly from a lack of oxygen, while delivering supplies.

But for some adventurers and explorers, cave diving has become a niche technical activity, requiring a skill set similar to a combination of open-water scuba diving and rock climbing.

The activity is so rarified that Bill Stone, a longtime cave diver and expedition leader from Texas, estimates that as few as 75 people around the world do it seriously. It’s so serious that Stone, who has been cave diving for 42 years, does not consider the diving part of caving to be recreational.

In fact, modern cave diving grew out of that need to explore, to go further.

The simplest form of the activity is the spring dive, in which you strap on scuba gear and journey down a clear-flowing subterranean spring. That watery endeavor is popular in Florida and on the Yucatan Peninsula. Stone estimates that more than 10,000 people around the world do this sort of cave diving. The longest spring dive on record, he says, was 10 miles underwater, round trip.

But the more serious activity, and what the Thailand divers must face, is the sump dive. Just as its name implies, this is a dive into a region of a cave where water, possibly murky and silty with little to zero visibility, and with water high enough to hit the ceiling, has collected. Professionals like Stone undertake these dives to get from one dry chamber to the next—it’s a means to an end.

Because it can be so unforgiving, careful training and the proper gear are essential.

Like any diver, cave divers wear a wetsuit or drysuit. They also carry multiple light sources (a rule that applies to dry caving as well). They pack in two air tanks, and two regulators, which carry the breathing air to your mouth via a mouth piece. They also wear a mask and fins. Generally speaking, cave divers follow a rule of thirds when it comes to their air: a diver should only use one-third of their air while going into the cave, saving two-thirds for the return trip. Sump divers wear helmets, too.

Because it’s sometimes impossible to see, cave divers always use a line, like climbers sometimes do while mountaineering. “There’s almost invariably silt on the floor, sometimes on the roof,” says Stone. A diver’s fins can loosen it and stir it up.

The vanguards set the line, using first a 2 mm thick rope and then bringing through a heavier and sturdier one. To stay with the line, a diver makes an OK sign with his hand around it, keeping it always in the circular space.

The goal, of course, is to get from one part of dry cave to the next. “Generally people sump dive so that they can get into cave that has air further beyond,” says Anmar Mirza, the national coordinator of the National Cave Rescue Commission in the United States.

Because you’re “basically diving in soup,” Mirza says, the line literally can be a life line. When a cave diver does die underwater, he says, usually it’s because they “lost their line, and get lost, and ran out of air.”

The pull of exploration

So why do people do it? Why take the risk?

“The thrill is finding something that’s new to you, or something that’s new to everybody,” says Forrest Wilson, the vice chairman of the National Speleological Society Cave Diving Section. Wilson made his first cave dive in 1969 and is still at it. “Most people I know who are not cave divers think I’m crazy,” he says. “But I have fun. I started doing it because I’m an explorer.”

One other aspect. Unlike in open-water diving, you can’t just surface in the middle of the journey. “You’ve got to get back to the entrance,” he says.