Soon You’ll Be Able To Buy A Tiltrotor Aircraft 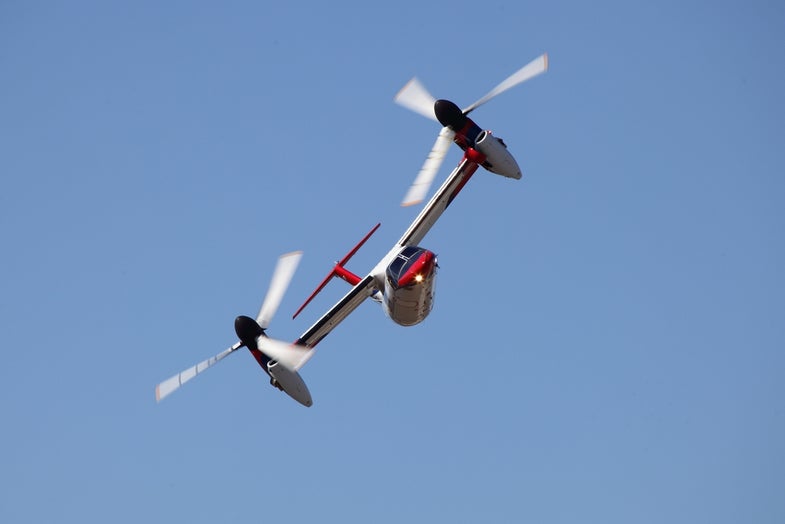 For years the military’s V-22 Osprey had a monopoly on the ability to take off and land like a helicopter but fly like an airplane. Now, thanks to AgustaWestland, civilians will soon be able buy their own tiltrotor aircraft, blandly named the AW609.

The tiltrotor design borrows from both helicopters and fixed-wing airplanes, and tries to minimize weaknesses of each. Fixed-wing airplanes are fast and more fuel efficient than helicopters, but they require long runways to take off and land. Helicopters, in turn, can take off and land from just about any space that’s larger than the sweep of their rotors, but they’re inefficient flyers and much slower than airplanes. Tiltrotors get the best of both worlds. They take off vertically like a helicopter, then tilt their rotors forward to fly like an airplane. They can land on runways like a traditional plane, or switch back and land like a helicopter.

This flexibility makes them appealing to the military. The AW609 bears more than a passing resemblance to its military predecessor, Bell and Boeing’s V-22 Osprey, a military transport plane which entered service in the mid-2000s after decades of development. Bell was initially part of the AW609 project, but left in 2011. Instead, the company is busily building the V-280 Valor, a prototype tiltrotor for the Army’s next generation of helicopters.

The AW609 has a top speed of over 315 mph and a maximum range of 860 miles. A helicopter like Bell’s 407GXP tops out at about 150 mph with a range of 380 miles, so the AW609 does in a tiltrotor about twice of what a standard helicopter can do. Tiltrotors can also work while hovering, though at that one task they’re less efficient than helicopters.

Tiltrotors like the AW609 won’t automatically replace helicopters at all jobs, but they’re good at carrying people quickly over longer distances to smaller landing sites. Which is great if you’re working on an oil rig or just happen to have a private island and hate how long it takes to get their by chopper.

Watch the AW609 take off from a parking lot: