The node can fit on the back of a truck, and is intended to be a hub for information analysis. 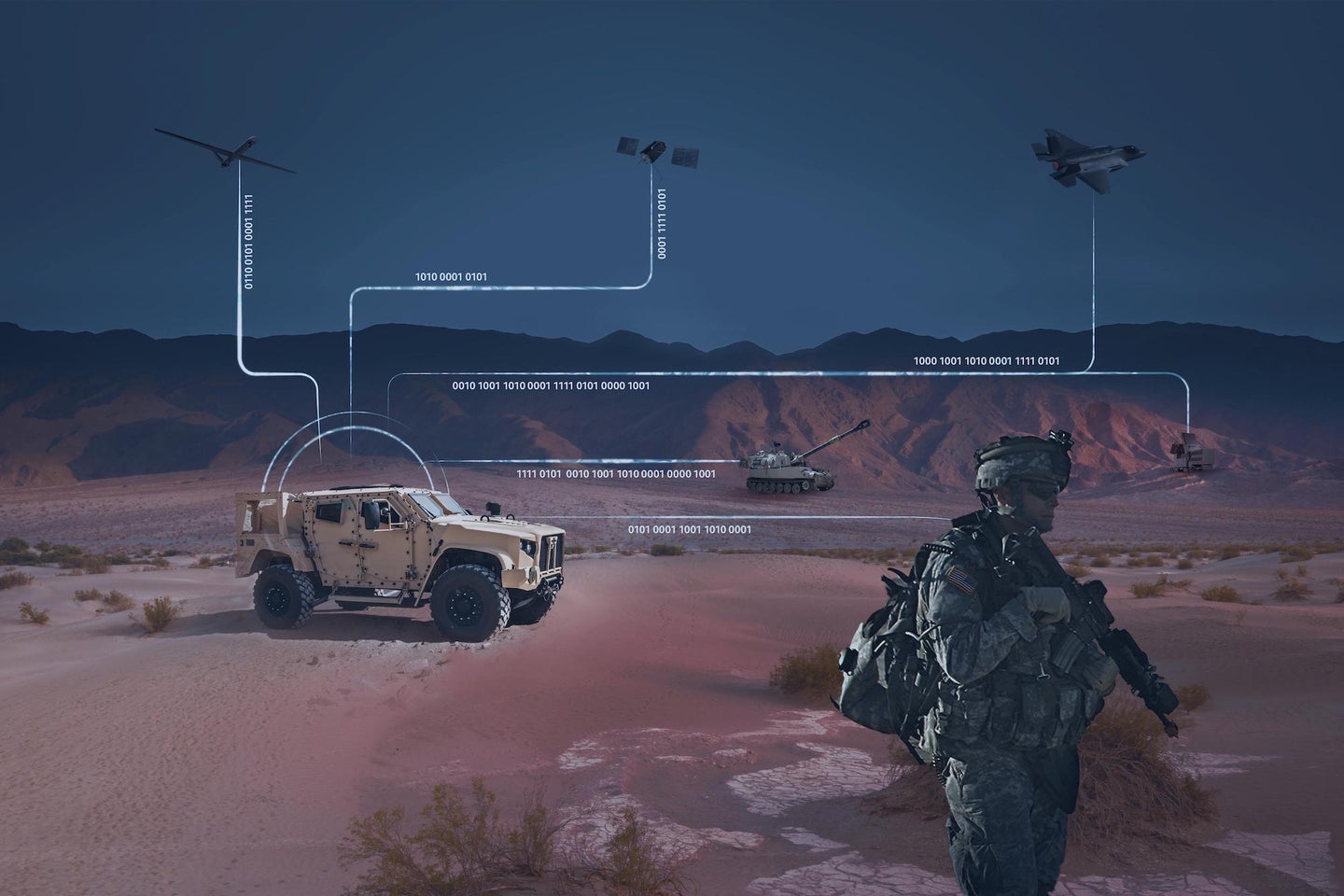 The concept behind TITAN is that it will help synthesize data from various sources. Raytheon
SHARE

A soldier who goes to war is part of a massive data-rich enterprise. Connecting that data, from satellites to ships to planes to soldiers, is a difficult task, but it is one the Pentagon sees as vital for fighting and winning wars. As part of that task, on June 29, defense giant Raytheon announced that it had been awarded the second phase of an Army contract for the Tactical Intelligence Targeting Access Node (TITAN) program. Understanding the node is key to understanding how the Army plans to use data in battles and wars in the 21st century.

The sensors that TITAN will draw data from already exist across many of the domains in which the military operates. Satellites in orbit relay communications, photograph the ground below, observe weather, and transmit geographic coordinates. Planes overhead, ships at sea, and trucks on the ground all carry sensors, each capturing vital information about where enemies might be, and how they might be moving.

Meanwhile, TITAN is not a sensor itself, but it exists as a single intermediary point between soldiers and these pre-existing sensors.

TITAN is a computer intended for use in the field, and it is “designed to receive, process and disseminate data. It autonomously sifts through massive amounts of sensor data to rapidly find and track potential threats,” says Scott McGleish, executive director for space and command and control systems at Raytheon Intelligence & Space. “We’re talking from space to ground, intel feeds from different types of data. And we’re talking thousands of pieces of data that have different labeling systems as well.”

Much of the military’s data collection processes date back years or even decades, with proprietary systems made by one company formatted to share data with that company’s ground stations. This type of process harkens back to an era where the notion of a satellite talking to a ship or a plane sharing data with a tank was something of a distant possibility. These systems were also built to communicate securely, so that the various radio and other signals containing data would be useless if intercepted.

But TITAN will be different. To make it work, it needs to be able to take information from across all these varied sensors, process and format them so that all this data can be turned into useful, actionable intelligence, which humans can then communicate to other humans.

TITAN is largely a data processing and software tool, complete with a graphic interface for sharing it, but physically it will look like a shipping crate on the back of a big truck.

“It’ll go down to the brigade level from a basic system on a JLTV platform vehicle,” says McGleish, referring to the Joint Light Tactical Vehicle that’s replacing Humvees in military service. The advanced version will go on the Army’s workhorse FMV trucks, with shipping-crate-sized shelters on the back, housing the system and room for people to work on it.

“Those shelters will basically have all the brains of the technology from the hardware, the communication suites, existing Satcom, and other communications. Inside there are a couple analysts that’ll be able to sit there and go through this,” says McGleish.

To help the human analysts understand all the information sent in, the TITAN will use processing algorithms to sort and filter data, converting more technical readouts into assessments of enemy positions and location. That will let TITAN help target attacks, from conventional weapons to effects like electromagnetic spectrum jamming, onto enemy forces.

In June, Raytheon equipment was used as part of the Valiant Shield 2022 exercise. “What we did is collect, process, [and] distribute targeting data across those military units,” says McGleish. The exercise saw Raytheon’s analytics, AI, and processing coordinate and relay data between a KC-135 tanker aircraft, a distant ground station, and a satellite.

It’s the kind of experience that informs TITAN, and how the military will fight not as distinct branches, but as interconnected sensors, weapons, and platforms. What TITAN adds is not a new weapon itself, or a new sensor, but the ability for the Army to take existing sensors from across the military and share their targeting data, securely and in real time, with other units that could use them.

It is easy to envision a future where, aided by TITAN, a brigade commander dispatches soldiers to ambush an advancing enemy column, while at the same time directing artillery to fire a supply depot spotted by satellite.