Lego’s augmented reality efforts have been sporadic in recent years. Its Playgrounds iOS app debuted at the end of 2018... 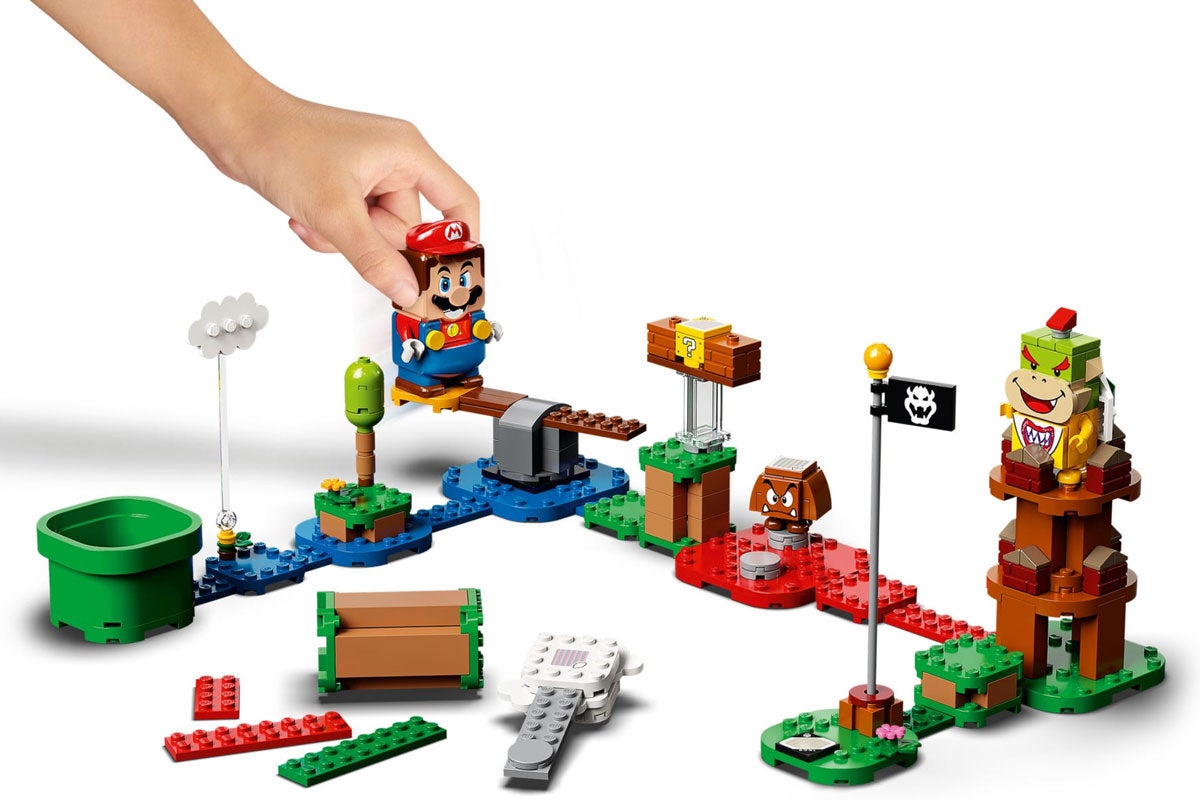 Lego’s augmented reality efforts have been sporadic in recent years. Its Playgrounds iOS app debuted at the end of 2018 and brought app-based digital functions to some physical brick sets. Its Hidden Side collections add AR elements to dedicated sets, but it doesn’t feel particularly focused. It’s a mix of STEM coding activities, VR games, and augmented reality building tech all mashed together.

Lego’s latest offering, however, is a collaboration with the mighty Nintendo to create a Mario-themed set. Rather than cramming lots of different functions and play patterns into the toys, it takes a focused approach. Kids use Lego bricks to build custom courses for an adorable plastic Mario to traverse. There’s no app-based video game. The figures aren’t a controller. The app is simply a companion and it’s much better off for it.

The game doesn’t work like a typical Super Mario video game. Risk of dying by falling down a pit or having an ill-fated encounter with an enemy takes a back seat to the fun that comes from the level-building process. The Mario figure doesn’t rely on a smartphone camera to observe its position or movements as with other app-based toys. Instead, Mario has a color sensor on the bottom that can recognize what kind of brick he’s standing on. There are seven kinds of action blocks that the figure can read, including land, water, and even enemies like the adorable Goombas.

The three-inch Mario’s eyes, mouth, and stomach all utilize LCD displays that can combine for more than 100 different reactions. A built-in speaker pumps out familiar sound effects from the franchise. The set has everything you’d want from a true collaboration rather than a slapdash toy branded with some licensed intellectual property.

Put Mario on a red piece that represents lava and fire appears on his chest display. Put him on top of a Goomba and a coin appears on the front of his overalls and you get that familiar coin sound.

An accelerometer inside Mario also keeps track of his movements. Put him on a cloud piece and wave him around and he’ll look and sound happy. Put him on a spinning platform and he’ll earn coins. Spin him in the opposite direction on the same platform and he’ll earn a coin bonus. Even though the player builds the course, Nintendo and Lego have hidden Easter eggs to let people discover and encourage more exploration.

Most of the interaction happens with the figure itself, but the Super Mario app contains essential elements such as the directions for building the levels. It also keeps track of any expansion sets that you buy and archives the direction videos for them for later reference.

Once you build a course, the app will allow you to take a photo of it and archive it so you can recreate it or share it with other Mario Lego players.

The real play, however, happens with the bricks themselves. You’re not controlling an app with the physical Mario pieces like with so many app-based toys. The app keeps track of your play and your creations, but actual play doesn’t involve looking at a screen once you’re up and running.

Nintendo is planning a number of expansion packs for the Mario world, but everyone needs the $60 starter kit before growing a collection. It will likely enjoy at least some success because most things Mario have a built-in audience. But, Nintendo and Lego have really made a great decision in avoiding the compulsion to do too much. Keep it simple and jump on Goombas. It’s worked for decades.