A tiny figure made from the magenetoactive substance can jailbreak by shifting phases. 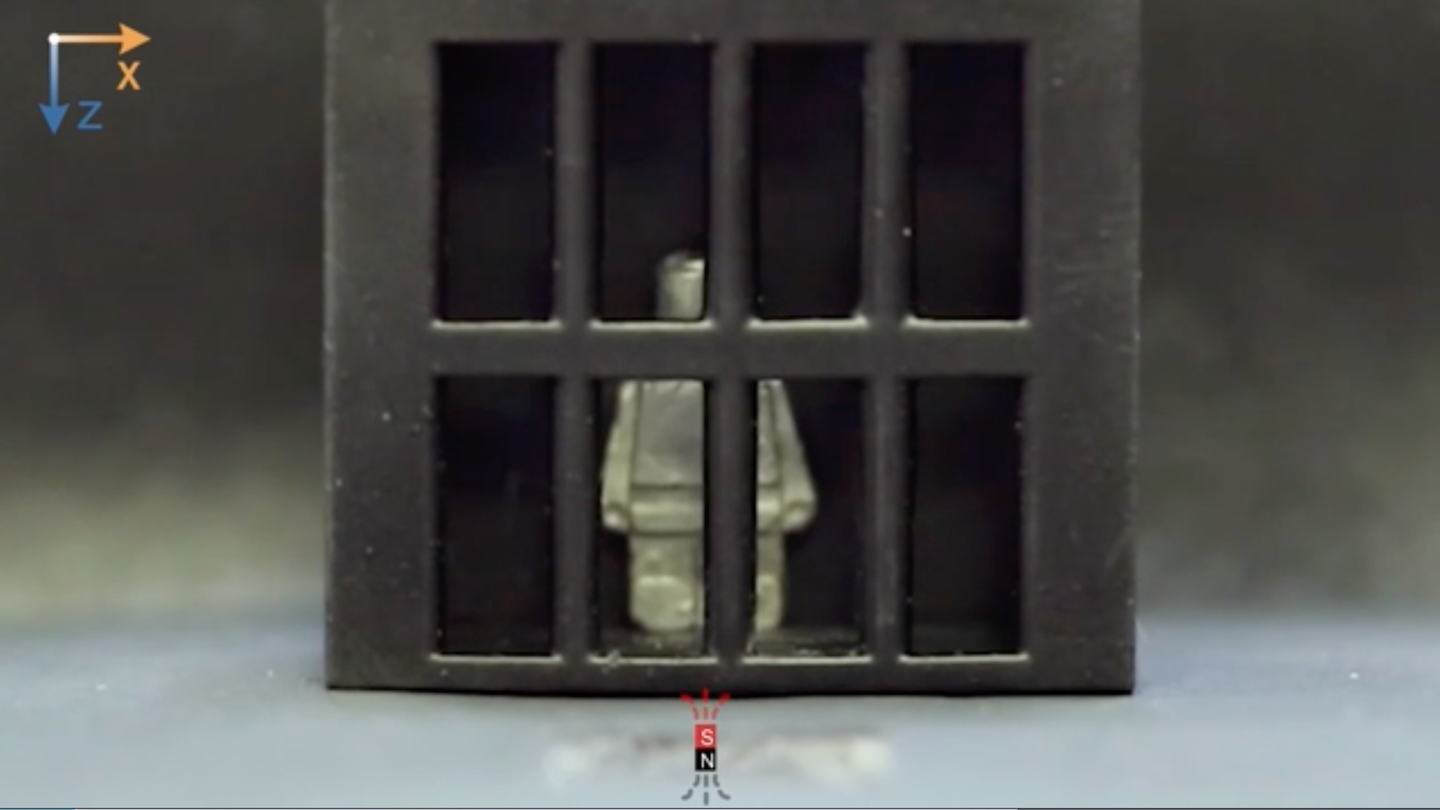 Sci-fi film fans are likely very familiar with that scene in Terminator 2 when Robert Patrick’s slick, liquid metal T-1000 robot easily congeals itself through the metal bars of a security door. It’s an iconic set piece that relied on then-cutting edge computer visual effects—that’s sort of director James Cameron’s thing, after all. But researchers recently developed a novel substance capable of recreating a variation on that ability. With more experimentation and fine-tuning, this new “magnetoactive solid-liquid phase transitional machine” could provide a host of tools for everything from construction repair to medical procedures.

[Related: ‘Avatar 2’s high-speed frame rates are so fast that some movie theaters can’t keep up.]

So far, researchers have been able to make their substance “jump” over moats, climb walls, and even split into two cooperative halves to move around an object before reforming back into a single entity, as detailed in a new study published on Wednesday in Matter. In a cheeky video featuring some strong T2 callbacks, a Lego man-shaped mold of the magnetoactive solid-liquid can even be seen liquifying and moving through tiny jail cell bars before reforming into its original structure. If that last part seems a bit impossible, well, it is. For now.

“There is some context to the video. It [looks] like magic,” Carmel Majidi, a senior author and mechanical engineer at Carnegie Mellon, explains to PopSci with a laugh. According Majidi, everything leading up to the model’s reformation is as it appears—the shape does liquify before being drawn through the mesh barrier via alternating electromagnetic currents. From there, however, someone pauses the camera to recast the mold into its original shape.

But even without the little cinema history gag, Majidi explains that he and his colleagues’ new material could have major benefits within a host of situations. The  team, made up of experts from The Chinese University of Hong Kong and Carnegie Mellon University have created a “phase-shifting” material by embedding magnetic particles within gallium, a metal featuring an extremely low melting point of just 29.8C, or roughly 85F. To accomplish this, the magnetically infused gallium is exposed to an alternating magnetic field to generate enough heat through induction. Changing the electromagnet’s path can conversely direct the liquified form, all while retaining a far less viscous state than similar phase-changing materials.

“There’s been a tremendous amount of work on these soft magnetic devices that could be used for biomedical applications,” says Majidi. “Increasingly, those materials [could] used for diagnostics, drug delivery… [and] recovering or removing foreign objects.”

Majidi’s and colleagues’ latest variation, however, stands apart from that amorphous blob of similar substances. “What this endows those systems with is their ability to now change stiffness and change shape, so they can now have even greater mobility within that context.”

Majidi cautions, however, that any deployment in doctors’ offices is still far down the road. In the meantime, it’s much closer to being deployed in situations such as circuit assembly and repair, where the material could ooze into hard-to-reach areas before congealing as simultaneously both a conductor and solder.

Further testing needs undertaking to determine the substance’s biocompatibility in humans, but Majidi argues that it’s not hard to imagine patients one day entering an MRI-like machine that can guide ingested versions of the material for medical procedures. For now, however, it looks like modern technology is at least one step closer to catching up with Terminator 2’s visual effects wizardry from over 30 years ago.