Enamel is so complex, it's nearly impossible to replicate. A team of engineers pulled it off anyway. 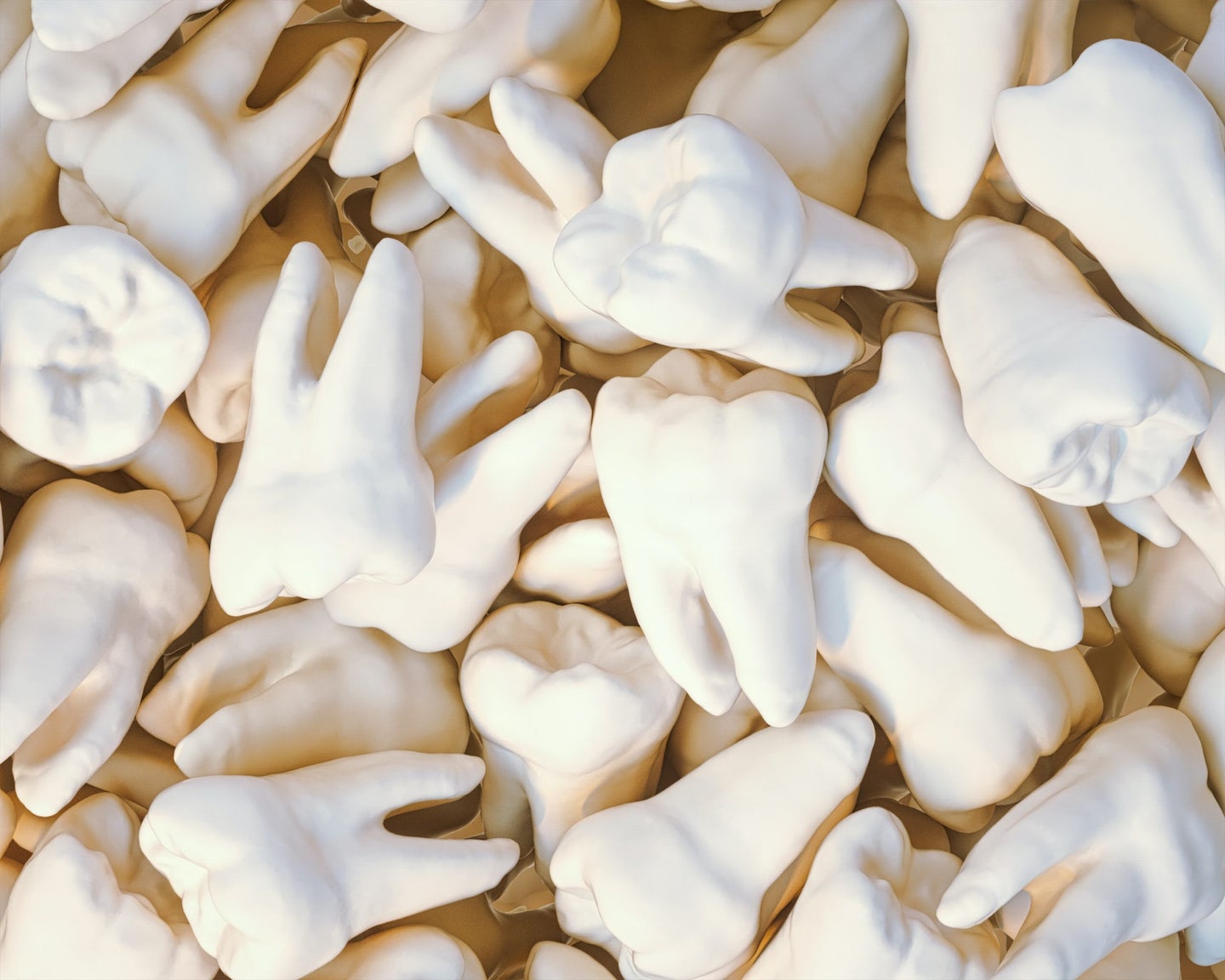 Tooth enamel is the hardest biological tissue in the human body. But once it's lost, it's nearly impossible to recover. Kev Bation/Unsplash
SHARE

Every day, you grind your teeth, and they bear it. As you pulverize hard foods or clench your molars when you’re stressed, you can thank a nanoscopic shield for protecting your pearly whites: your tooth enamel. Only a few millimeters thick, this intricate outer layer on the tooth’s surface allows you to mash, shred, and chew without constant pain to the sensitive tissues beneath.

Tooth enamel is the hardest known biological tissue in the human body (and also looks beautiful under a microscope). Dental scientists have long explored ways to replicate this super thin, but strong structure for longer lasting protection to keep teeth healthy. Now a team of engineers have taken a step closer.

Materials scientists and chemical engineers from Beihang University, Peking University, and the University of Michigan have created a synthetic tooth enamel that’s even stronger than what’s found in our teeth. They described their crowning achievement in a study published on February 3 in Science. The biomimetic tooth enamel was modeled after nature’s original design, but tweaked in the lab to withstand even more wear and tear. While other engineers have been able to recreate certain parts of this hard outer layer, this new approach took into account both the stiff and elastic components to more closely resemble the composition and structure of the real substance.

“Tooth enamel possesses outstanding viscoelasticity to endure vibration and deformational damage for ultra-long time service,” writes Hewei Zhao, the lead author of the paper and chemical engineer at Beihang University in Beijing, in an email. “These properties are traditionally considered as trade-offs. This is unusual in [human-made] materials and gave us motivation to study it.”

[Related: We finally know why we grow wisdom teeth as adults]

Enamel offers protection from a litany of oral offenses. It’s constantly bombarded by the onslaught of acids and bases from food and drink, and contending with new bacteria and changes in the mouth’s microbiome. Not to mention that enamel can be scraped down from over brushing and habitual teeth grinding. “The environment is so aggressive,” says Nicholas Kotov, a chemical engineer at the University of Michigan and a coauthor on the paper.

Time, wear, and decay bore holes through a tooth’s outer layers, resulting in cavities and other dental issues. Unlike a broken bone, enamel’s defensive lining doesn’t repair itself, explains Janet Moradian-Oldak, a biochemist and professor in the School of Dentistry at the University of Southern California, Los Angeles, who was not involved in the research.

In fact, enamel is devoid of living cells, Moradian-Oldak explains. “By the time the teeth emerge from the gum, the cells that make enamel, called ameloblasts, are dead,” she says. She’s currently testing out ways to regrow enamel with peptide hydrogels, but admits that it’s a huge challenge across dental research.

Part of enamel’s strength—and a reason why it’s so tough to copy—comes from its complex, intricate structure. The mineralized fortress is made of tiny interconnected tubes known as  nanorods, which are filled with a lattice of calcium hydroxyapatite, a type of calcium phosphate mineral. “The crystals are what make it very unique,” Moradian-Oldak says.

These nano-sized crystals are bundled together in a prism, each one interwoven and laced together, Moradian-Oldak says. “It’s like a handful of dry spaghetti before you drop it into the pot,” she says. But the hard crystalline nanorod structures can break without any supportive padding. As chewing forces pound the nanorods, an amorphous layer made of magnesium, proteins, and other compounds absorbs the blow and pressure so the rods don’t break.

“Each of these little nanowires, or each dry spaghetti, is covered with an amorphous material,” Moradian-Oldak says. “Flexible materials are soft and hard materials are fragile, but what enamel really does is have a combination of both.” The slight elasticity of the amorphous substance is a key component to the hierarchical organization that gives tooth enamel its mechanical strength, says Kotov.

“What’s important for biological structures is that there’s not just one property—there are many properties at the same time that have to be optimized, and enamel is one of those biological wonders,” he notes.

To assemble the artificial tooth enamel, the engineers made their own tightly aligned crystal hydroxyapatite nanowires and coated them with zirconium dioxide, an even stronger version of the magnesium amorphous material, Zhao writes. This tuning and adjusting of filler content made the synthetic enamel “equal or better” than human enamel, Kotov says. “Past studies were able to replicate enamel with fully crystalline nanorods, which performs reasonably well … but not as well as when [our team] added the layer of amorphous phase. This study shows very eloquently and very convincingly that the macroscale versions of such high performance materials can be obtained,” he says.

Zhao and Kotov both think that the artificial tooth enamel could help people freshen up their worn-down defenses. But Kotov also sees the new approach going beyond simple patches and fixes and leading to actual “smart” teeth that self heal or sense inflammation, switches in the mouth’s microbiome, and acetone in the breath, which is a marker of diabetes.

However, Moradian-Oldak expresses reservations about its practical use in dentistry any time soon. The engineers created their enamel by heating materials to 300 degrees Celsius, placing them under freezing temperatures, and using polyvinyl alcohol to control some of the crystallization paths. “Remember, in nature, we don’t have extreme temperatures, extreme pH, extreme pressure as these engineers did,” she says.

And while the artificial enamel contains critical aspects that haven’t been synthesized before, Moradian-Oldak adds, it doesn’t quite match the 3D structure of real human enamel, which is an important consideration for dentists when they’re adhering or anchoring material to a tooth or the bones in the jaw.

“They got something which is much, much stronger, but it still lacks some unique higher hierarchy of enamel,” she says. Still, she notes that there are helpful takeaways from the team’s techniques and approach. “I was very impressed how engineers can actually mimic the basic scientific principles of composition and structure on a very, very precise level.”

[Related: How to be a responsible adult and brush your teeth properly]

Understanding and engineering enamel’s structure on the nanoscale could lead to building materials for disciplines beyond dentistry, Kotov says. He and Zhao say that its stiffness and high tolerance to vibrations could be crucial in constructing earthquake-ready buildings. Moradian-Oldak imagines that it could be utilized to create helmets for soldiers as well.

By looking to “biological wonders” like tooth enamel, engineers have the chance to improve upon nature’s design for materials and inventions that humans need more of, Kotov says.

“Of course, nature can achieve that with evolution, but it takes a while,” he explains. “Some materials are available to us that are not available to cells. Now we can restructure these materials to obtain even better properties by replacing some of the components.”