From the archives: When superconductors finally grew up

In 1967, half a century after the discovery of superconductive metal, Popular Science covered the emerging field and its potential futures. 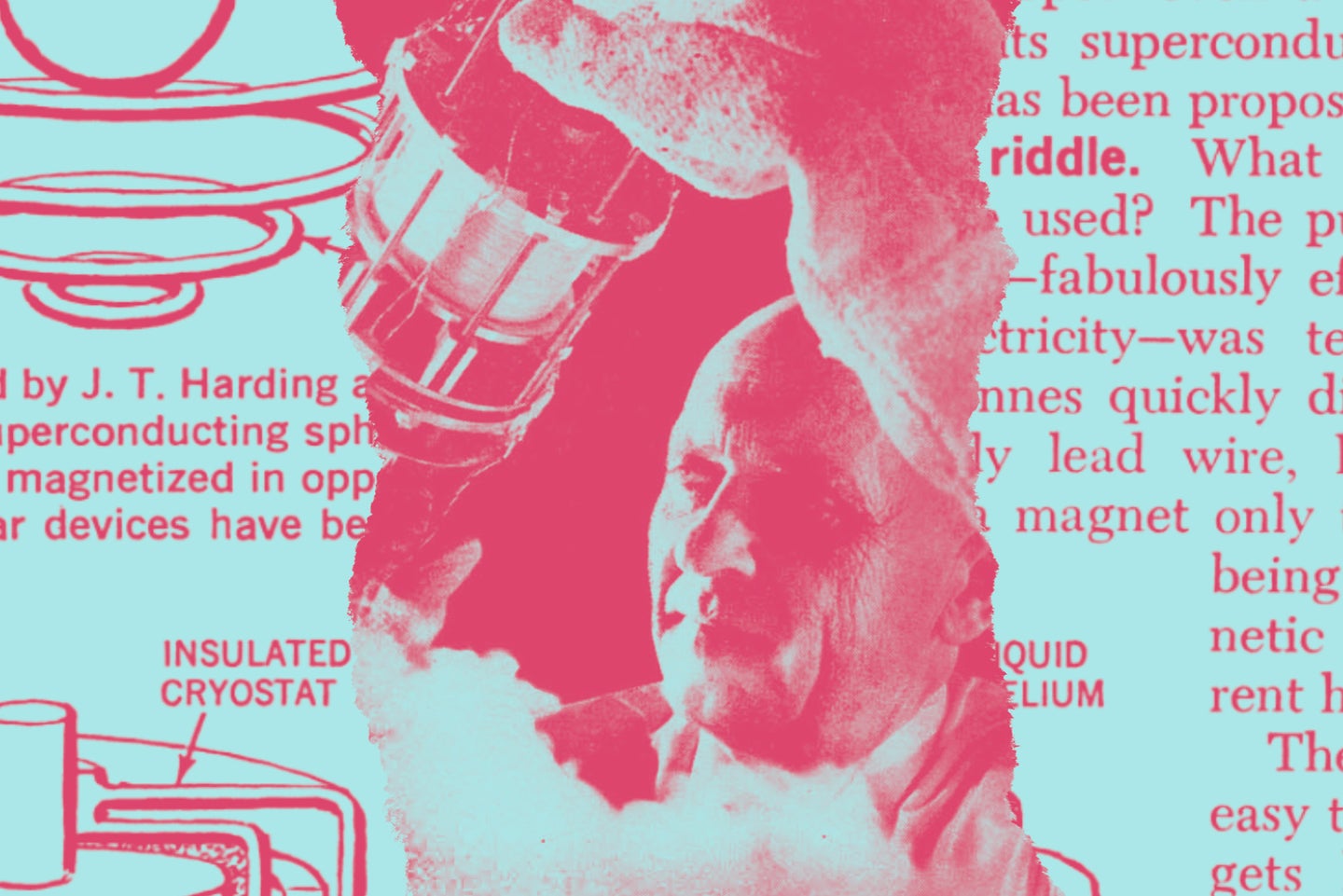 Before physicists began to grok the laws of thermodynamics in the mid-1800s, inventors, lured by the idea of perpetual motion, sought to exploit the movement of heat. Alongside earnest innovators, hucksters filled the scientific void. Such was the case of Charles Redheffer, a self-proclaimed inventor who posted up in Philadelphia and New York City in 1812 to sell tickets to peep his infinitely moving machine, later revealed to be operated by an old man turning a crank in a hidden loft.

Even after thermodynamics exposed all the frauds, the notion of free work refused to die. In 1911, Heike Kamerlingh Onnes, a Dutch physicist, discovered that electricity would infinitely flow through mercury chilled to −452° Fahrenheit, near absolute zero. Perpetual motion was back! This time cloaked in superconductive metal.

It would take another 50-plus years for engineering to make any real progress with such materials, as Popular Science reported in March 1967. And yet another half century on, the quantum mechanisms that allow electrons to rapidly flow are still being worked out, and the hunt for the perfect superconductive substance (i.e., one that works at room temperature) continues.

Far down on the temperature scale near absolute zero (−459°F) lies a strange world of “electrical perpetual motion”—or ­superconductivity—where electric currents, once set in motion, flow forever. With new developments in materials and the methods for cooling them, truly fantastic devices are taking shape in laboratories across the country:

• Superconductive motors that operate with greater efficiency than any rotating machine ever built (the energy used to refrigerate them notwithstanding)—because of both resistance-free windings and frictionless superconductive bearings.

• Superconductive generators that put out more power with less weight and volume than anything yet known.

• Superconductive bearings and gyroscopes that “float” in vacuums or liquid helium.

• “Fast-thinking” computer logic elements known as cryotrons. The newest of these from IBM, never before revealed, is based on a phenomenon called electron tunneling, and operates at speeds of less than a billionth of a second.

• Tiny threadlike wires 1/100 inch in diameter, made of exotic materials, that carry currents of 300 amperes—without resistance, without heating. A conventional room-temperature conductor would have to be 600 times larger.

• Direct-current transformers, thought to be impossible before supercold techniques.

• Devices known as “flux pumps” that convert small voltages, currents, and magnetic fields to large ones.

• Superconductive magnets and solenoids, tiny in relation to comparable electromagnets, which form fields many times stronger than that of earth and operate forever, given a jolt of starting current. They are the first of the new “perpetual motion” machines to come of age, and one manufacturer (RCA) now makes them on an assembly-line basis.

The search for electrical perpetual motion spans 50 years. It is a fascinating story, one full of accidental discoveries, years of frustration, and then the slow, gradual uncovering of new clues that have today brought us to the threshold of an exciting new technology.

Normally, metals have resistance to the flow of electricity, and much of the energy fed into a wire is wasted as heat. Why?

The atoms of copper, for example, are bound together to form molecules, and the molecules to form a highly ordered three-dimensional grillwork or lattice. There are plenty of “free’” conduction electrons that can move through the lattice carrying an electrical current. Unfortunately, at any temperature above absolute zero, heat energy causes a great deal of disorder.

The lattice structure is in a constant state of vibration, and it scatters the electrons, generating even more heat, more agitation, and more resistance to the flow of current. Around the turn of the [20th] century, Dutch physicist Kamerlingh Onnes determined to find out how much the resistance of a metal could be reduced by extremely low temperatures. He was able to do so, for he was the first to succeed in liquefying helium. At its incredibly low boiling point of −452°F (4.2 Kelvin), it offered the first practical way to cool a metal down close to absolute zero.

Working with purified mercury, Onnes measured its resistance as the temperature fell. At first, things went as predicted. Then, suddenly, inexplicably, at a temperature of 4.15 Kelvin, the resistance disappeared altogether. Once set flowing in the mercury, a current would flow forever. Dumbfounded, Onnes realized that he had stumbled onto an entirely new state of matter, one in which a kind of perpetual motion or superconductivity was possible.

What was superconductivity and how could it be used? The puzzle vexed scientists for 50 years. The bait—fabulously efficient ways of transmitting and using electricity—was tempting, but the problems were many. Onnes quickly discovered that his superconductors, notably lead wire, had severe limitations. He tried to build a magnet only to find that the lead ceased being superconducting in a magnetic field. A strong flow of current had the same effect.

Theory didn’t help much. It’s easy to understand why resistance gets less as temperature drops. Take away heat and you lessen lattice vibrations and electron scattering. But complete absence of any resistance is something else. To make things worse, superconductivity occurs at temperatures well above absolute zero—at above 18°K in recently discovered compounds.

Then, in 1957, the first workable theory of superconductivity was evolved by three brilliant scientists: J. Bardeen, L.N. Cooper, and J.R. Schrieffer.

Although electrons are of like charge and normally repel each other, in the frigid world close to absolute zero an unprecedented phenomenon called “electron pairing” occurs. Subjected to intense cold, they literally condense—like drops of water on a cold surface—down to a lower energy or quantum level. At this level, tiny attractive forces occur between electrons of opposite spins and equal and opposite momentums. They interact with each other and with the lattice, exchanging with it phonons (quantums of vibrational energy), much like two tuning forks of the same frequency mounted close to each other on the same base. And the electron pairs interact with other pairs in the superconductor in wavelike fashion.

What keeps the electrons from colliding with the lattice and giving up their energy as heat? The answer lies in quantum mechanics, said the scientists. A certain binding force holds the electrons together, reducing their potential energy. If one electron of a pair should be scattered, its potential energy would take a quantum jump upward, more than making up for its loss in velocity.

In other words, it is impossible for the electrons—at their low energy level—to give up energy to the lattice by colliding with it; they only gain energy. Free from energy losses, the electrons become “frictionless” -perpetual-​-motion carriers of any current impressed on them.

With a workable theory, the stage was set for the first of the “perpetual motion” machines. The problem remaining: materials that would take an intense magnetic field and stay superconducting.

Then, in a breakthrough comparable to the discovery of superconductivity itself, J.E. Kunzler of Bell Telephone Laboratories in 1961 found that certain superconducting alloys—combinations of niobium-tin, -vanadium-​-silicon, -vanadium-​-gallium, -molybdenum-​-rhenium, and niobium -zirconium—would withstand magnetic fields as high as 100,000 gauss, 200,000 times as strong as that of the Earth!

The new superconductors were labeled “hard” in contrast to the pure—element superconductors (lead, tantalum, mercury, tin, aluminum, for example), which are ductile and soft. They are also known as Type II or filamentary superconductors, which explains why they work.

In contrast to the pure superconductors, the new alloys permit magnetic flux to enter, turning certain areas of the wire normal. Supercurrents continue to flow, however, in tiny, threadlike filaments throughout the wire—​because of the very impure composition of the wire itself.

Superconductive magnets are often nothing more than a small coil suspended in a gleaming stainless-steel Dewar (insulated container) of liquid helium. Yet their fields compare with those of conventional electromagnets that require the entire output of a small power plant and thousands of gallons of cooling water.

What happens when you scale up a superconductive magnet? I saw the world’s largest at Avco in Boston. Under a 40-foot tower, supported by nonmagnetic aluminum beams at one side of a huge laboratory, sits an enormous Dewar that holds 6,000 liters ($24,000 worth) of liquid helium. For testing, the 10-foot, eight-ton magnet is slowly lowered into the Dewar and helium is added. Its windings, nine strands of niobium-zirconium wire, are embedded in a copper strip to keep the superconductor from developing hot spots and going normal. Thick aluminum cylinders support each layer of windings—to keep the immense forces within the magnet from bursting it with explosive violence.

A DC generator (superconductors do rapidly develop resistance to high AC currents) hums in the background as the magnet begins to charge. The process will take 25 minutes and when it is complete the magnet will hold energy of 5 million joules—equal to 91/2 sticks of dynamite.

I asked my host, Dr. Z.J.J. Stekly, what such huge magnets could be used for.

“MHD power generators are one possibility,” he told me. “Avco has already built a prototype that generates electricity from ionized hot gases passing through the magnetic field. Among other applications are magnets for accelerators, bubble chambers, and other research devices.

“They may be used to create magnetic ‘bottles’ for containing the plasma in generating power from thermonuclear explosions. It has even been suggested that the magnets be used to shield spaceships from the deadly radiation emitted by the sun.

How close are we to superconductive transmission lines—non-resistive lines saving millions of watts of power? Dr. John K. Hulm of Westinghouse expresses cautious optimism. “They’re close to being practical,” he told me. “In the near future we’ll reach the point where the economics will be such that we’ll build them.”

Dr. Hulm is in the forefront of researchers working to extend the top temperature at which superconductors operate, currently 18°K.

“We’ll find materials that exhibit superconductivity in the 20s,” he told me. “And then we’ll be able to use inexpensive hydrogen that boils at 20 degrees for cooling. Insulation will be simpler, cheaper. Who knows what we’ll discover—with superconductivity we’re at the stage where Faraday or Tesla were with electricity.”