Touch-Sensitive Robot Arm Can Tuck You In At Night

The robot's stretchy, sensor-studded "skin" lets it touch humans without crushing them. 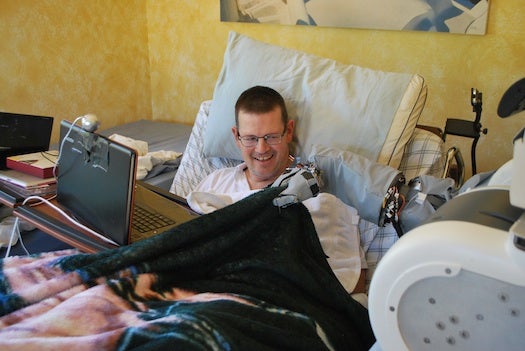 Whoops—excuse me. Here’s a robot arm that knows when it’s bumped into you and can brush safely past you without pressing too hard and hurting you.

Many robots today, such as the robots that work in factories, are shielded from their human co-workers because they can’t tell when people are nearby could easily pinch or crush them. That’s why researchers in labs all around the world are working on robots with softer bodies, or robots with sensors that make them work more safely alongside people. Now, roboticists from Georgia Tech and San Francisco-based Meka Robotics have built an arm covered with a sensitive “skin” that lets it reach through clutter without knocking things over and gently dab a person’s mouth clean.

The arm is programmed to reach for a target while keeping the forces it exerts on other things low, Charlie Kemp, the arm’s lead designer, says in a video from Georgia Tech. It’s a new way of thinking about how robot arms should work, Kemp says. Instead of keeping these strong mechanical limbs away from people, the limbs are equipped to brush up against people and interact with things in a way that’s not harmful.The robot doesn’t need to have every new environment it encounters pre-programmed into it. Instead, it uses its touch sensors and computer vision to figure out what’s in front of it, the New York Times reported.

Check out the video to see the arm snaking through some silk plants, the opening in a cinder block and a bunch of lab-made “clutter.” The video also shows a man with quadriplegia named Henry Evans who tried out the arm:

The arm seems too slow and clumsy to actually be very helpful yet, but Evans reported he felt safe while using the arm and that it never pressed hard against him, according to Georgia Tech.

Kemp and his team published a paper about the arm last month in the International Journal of Robotics. They’ll present their research with Evans on the safety and helpfulness of the arm at a conference in June.