Fund A House That Shapeshifts With The Seasons

Now on Kickstarter: a house that opens up when it's light out, and folds back in when it turns cold. 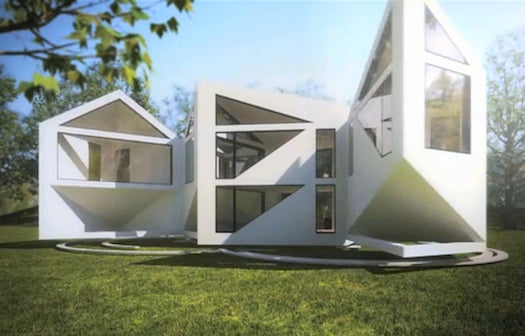 Way back in 1903, mathematician Henry Ernest Dudeney worked out how a perfect square could be cut into sections and folded into an equilateral triangle. It’s a neat trick, but what can we do with it? If you’re design team D*Haus Company Limited, you try to live inside it, apparently.

Just put up on Kickstarter, D*Dynamic is a proposed house that changes shape based on that mathematical model. Even if the execution is complicated, the idea actually isn’t: it’s a house that can rotate and open up–from a square to a triangle–depending on the season. On a beautiful summer day, it can extend windowed walls out to soak up the sunshine. In winter, it can curl up into a cube to stay heated.

D*Haus announced the project back in 2011, and still aren’t completely set on how to make the project a reality. The team’s funding goal of £30,000 (about $45,000) will go toward making another project, the D*Table, which folds in the same way as the house but goes inside the house instead. If they can reach a higher funding goal, they can commission a detailed design for the house, Daniel Woolfson, director at D*Haus, says. (The Kickstarter lists that goal at £250,000, or about $380,000, but Woolfson says they might be able to do it with half that, maybe between £100,000 and £150,000.)

“We have investigated a few options in terms of how the track will work,” Woolfson wrote in an email. “We’ve met engineers and experts along the way. But now we need to commission the study to tell us exactly which solution will work best for the house.” That also extends to how the house will be powered, although D*Haus wants to make it run on solar energy.

If you’re looking for something D*Hausian in the meantime, the team is offering the D*Tables starting at about $1,500. But the house seems so fun! Maybe we can just crawl inside one of the tables until the house is ready.