This ain’t a scene, it’s an arms race 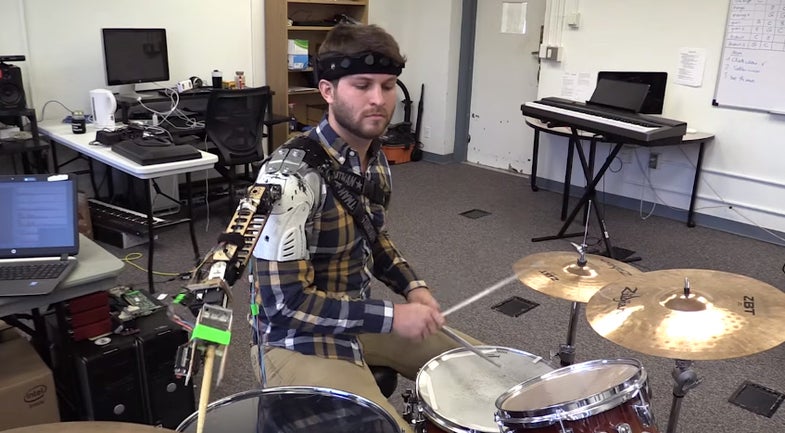 The cymbalism of a three-armed drummer is obvious. Much of the focus on prosthetic limbs is about restoring ability, healing that which is broken or at least returning an injured limb to a semi-functional state. But the same technology that replaces a broken arm could also give a person with two arms a brand-new third limb, in a way transcending the simple limitations of the organic body. Like this:

This robot drum arm comes from Georgia Tech, and was originally designed as a way to help a drummer who had lost an arm. (No, not the one from Def Leppard.) Here, the drum arm augments an existing drummer. While the user in question is wearing a headband with sensors, that part of the project isn’t ready yet. Instead, the robot arm is drumming of its own accord, with some awareness of what the human is doing. It listens, and it plays along.

Here’s how it works, according to Georgia Tech:

Think of it less like a third human arm, and more like a friendly robotic symbiant that only wants to rock. Watch it in action below: