A new study demonstrates how easy it is to identify people from the location-tracking data on their cellphones. 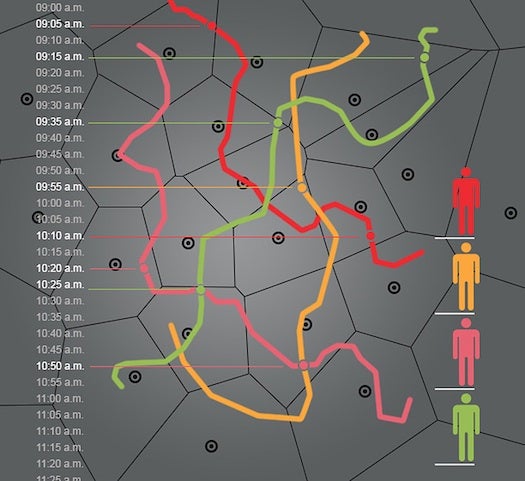 Just a few data points from a location-tracking cellphone are enough to identify most people, a new study found. It doesn’t matter if those data are “anonymized” so they aren’t linked to any identifiers such as address or phone number. Just four random points are enough to put names to 95 percent of the anonymized users in a cellphone database.

The study fits in with growing evidence that fairly publicly available data—cellphone location data is open to many location-tracking apps, for example—is not as anonymous as you might think.

The research team, including technology researchers from the U.S., Belgium and Chile, looked at 15 months’ worth of location data from 1.5 million cellphone users in a “small European country.” The data weren’t particularly detailed. They simply tagged people by their closest cellphone tower once an hour. Many apps get similar data from Apple and Android.

The team then figured out the math to identify 95 percent of the phone-users from just four randomly selected data points. Given 11 data points, they could identify all of the users.

The danger of being able to identify cellphone users so easily is that you could deduce some pretty private information just from where people go. You could see if someone attends certain religious or political meetings, visits an HIV/AIDS or reproductive clinic, or hangs out with an ex or a business rival.

At the same time, cellphones and smartphone apps aren’t about to give up tracking their users’ locations. Looking at my own phone, it’s hard to identify which apps don’t track my location (The AllRecipes Dinner Spinner, maybe?) Sometimes I really appreciate the geo-location, like when I’m looking for a nearby restaurant, or lost in the city.

The new study’s authors don’t come down hard on one side or another. “This formula is something that could be useful to help the debate and decide, okay, how do we balance things out, and how do we make it a fair deal for everyone to use this data?” Yves-Alexandre de Montjoye, one of the study’s authors and a doctoral student at MIT’s Media Lab, told MIT News.

De Montjoye and his colleagues published their work in the journal Scientific Reports.