The solar-powered rover is a contender for the $30 million Google Lunar X Prize. 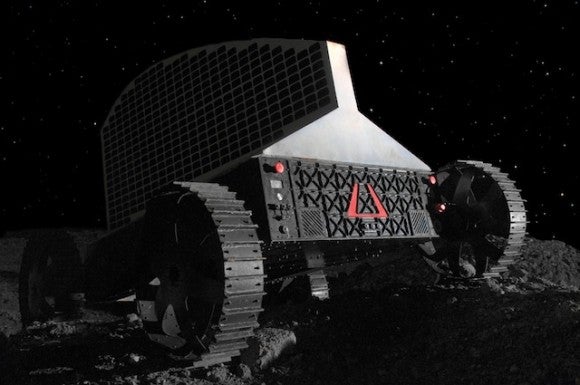 A first-of-its-kind solar-powered lunar rover can drill 3 feet into the lunar surface, hoisting a vertical triple solar array to capture sunlight from super low on the moon’s horizon. Roboticists at a company called Astrobotic, a spinoff from Carnegie Mellon University, built a working prototype and plan to test it in the next few months.

Astrobotic and CMU hope to nab the $30 million Google Lunar X Prize for the first privately funded team to send a robot to the moon. Polaris is designed to seek out water ice trapped in the cold craters and regolith at the moon’s poles. It has 3-D cameras and laser guidance systems for navigation, and it will communicate directly with Earth using an S-band antenna.

A lunar day lasts about two Earth weeks, and about 10 of those days would have enough sunlight for drilling at the moon’s poles. Polaris would drill up to 100 holes in those 10 days as it searches for water ice deposits. If it survives the lunar night, it could recharge again as soon as the sun comes up, and continue drilling for ice as long as its drill bit lasts.

Polaris would launch on a SpaceX Falcon 9 rocket and land near the moon’s north pole, according to CMU. You can follow its progress here.