‘MacGyver’ Robot Could Make Use Of Objects It Finds

Georgia Tech researchers are designing robots that can improvise, using objects in their environments to complete complex tasks. 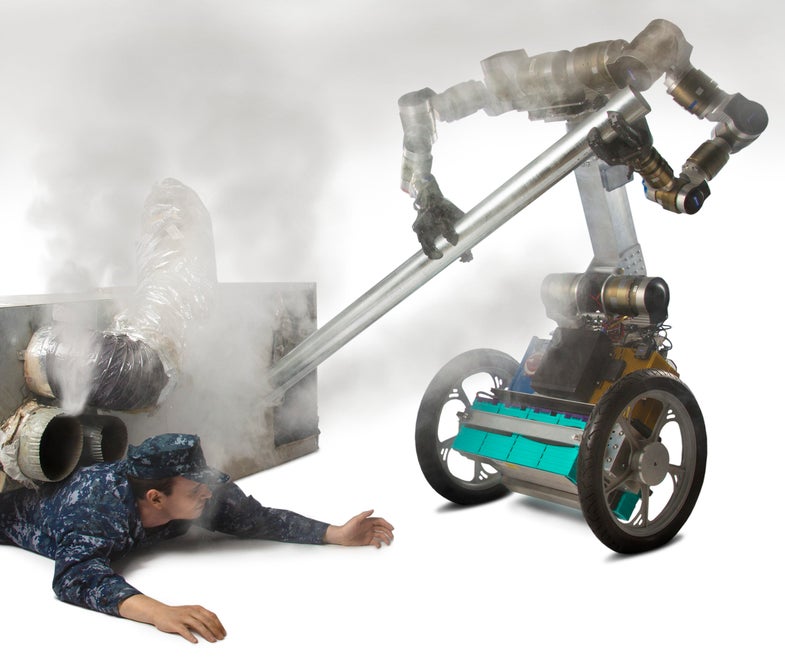 Give a modern robot a specific job to do and it will do it pretty well, whether it’s scooping dog waste, fetching food for humans, or searching a dangerous environment. But it probably wouldn’t be able to improvise, or figure out how to grab objects lying around it and use them as tools. Researchers at Georgia Tech want to change that, turning robotic helpers into machine MacGyvers that can use objects creatively to solve complex problems.

GA Tech Professor Mike Stilman, who studies robot navigation among movable obstacles, is studying the cognitive processes that enable humans to grab arbitrary objects and find creative new uses for them. Future robots might scan their environments, see something on the ground, and quickly run through a list of possible uses for the thing. Maybe it sees a chair and realizes chairs have height, so it can use the chair to climb up to reach a window to escape a burning room. Or maybe it sees a metal pipe and realizes it can work as a lever to lift something heavy, freeing a human trapped under it. Stilman said the goal is to create machines that operate like MacGyver, the ’80s TV character.

This would be helpful for military robots working alongside human personnel–so the Office of Naval Research is funding Stilman’s work with a three-year, $900,000 grant. The first step is to build a “hybrid reasoning system,” which will use physics-based algorithms and a learning system to teach robots how to recognize and use various objects. They plan to test it using a headless humanoid robot called Golem Krang, seen above pretend-rescuing a trapped seaman. This research on a MacGyver-bot is one of its kind, according to the Navy.