While NASA waits with bated breath for the Curiosity rover’s arrival on the Martian surface, engineers at NASA and the... 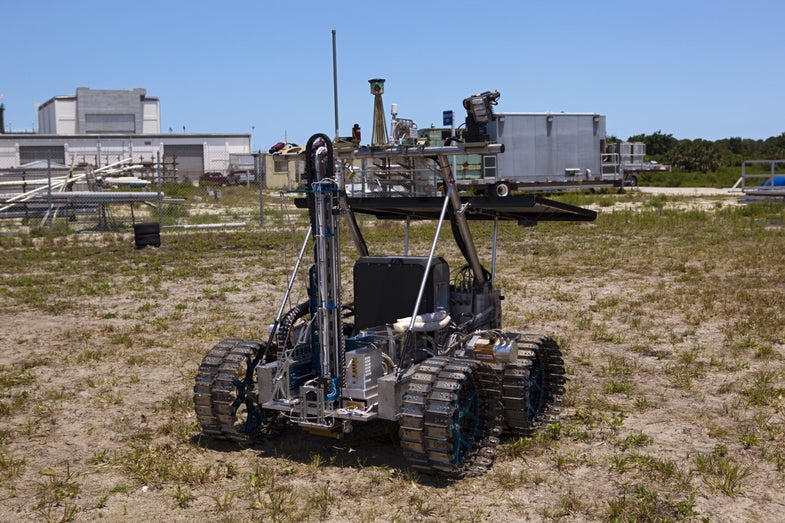 While NASA waits with bated breath for the Curiosity rover’s arrival on the Martian surface, engineers at NASA and the Canadian Space Agency are already at work testing a new lunar rover designed to seek out water and other natural resources closer to home. The rover payload, known as the Regolith and Environment Science and Oxygen and Lunar Volatiles Extraction (RESOLVE), is designed to spend nine days prospecting for water resources on the moon sometime in the future.

The idea behind RESOLVE is to determine if there is actually enough accessible water on the moon to enable a prolonged manned mission there, or perhaps even to set up a permanent manned base near one of the lunar poles. Previous missions like the Lunar Reconnaissance Orbiter and the Lunar Crater Observation and Sensing Satellite have returned data that suggests the moon’s polar regions contain deep craters where water ice lives in shadowed recesses where it won’t evaporate. But it’s unclear exactly how much water is there, or if it can be tapped by humans that might potentially land there in the future.

During its nine-day mission, RESOLVE is designed to sample the regolith, drilling into the lunar surface and heating sampled material to determine what kind of water vapor and other compounds are present. Water, of course, is a key enabler for any kind of manned presence in space. Not only is drinking water necessary, but it can be split into hydrogen and oxygen to create fuel to run generators or to power spacecraft. So in other words, RESOLVE is basically designed to scout for an ideal location for a future manned return to the moon–something that in and of itself is a pretty amazing prospect.

Moreover, RESOLVE is a platform ripe for adaptation. With some design tweaks, engineers say it could easily be converted to a Mars or asteroid prospector, opening up the possibility for future manned missions to those bodies as well. NASA is taking the rover to Mauna Kea in Hawaii next month to put it through the paces in the simulated moon environment provided by the volcanic landscape there.