How Felix Baumgartner’s Skydive Should Unfold

The predawn hours are dark and still at the Roswell International Air Center, where today Felix Baumgartner and the Red Bull Stratos team are preparing for his 23-mile-high skydive. There's currently a weather hold due to high winds at 800 feet. Once that hold lifts, here’s the play-by-play of how the morning should unfold from the project’s technical director Art Thompson. 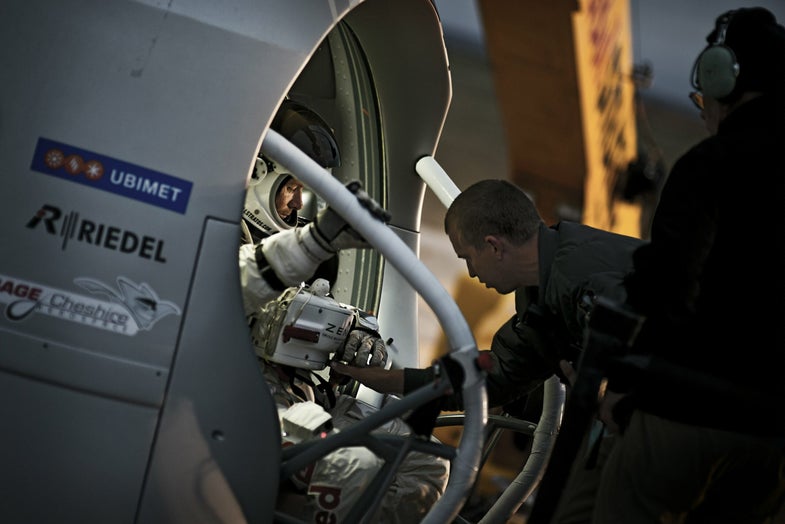 Pilot Felix Baumgartner of Austria sits in his capsule during the preparations for the final manned flight of the Red Bull Stratos mission in Roswell, New Mexico, USA on October 6, 2012. Jörg Mitter/Red Bull Content Pool
SHARE

Once they receive the go signal, the flight crew will roll out the balloon from the crate, getting the crane into position with the capsule and flight train. Inside the capsule, Felix will prebreathe pure oxygen and do instrument checks. About 30 to 40 minutes before launch, they’ll start to inflate the balloon. And about 15 minutes before launch, we’ll pressurize the capsule from the outside with about 1 psi and that seals the door shut.

The balloon climbs at about 1000 feet per minute. There’s a danger zone in the first four thousand feet where if something happens to the balloon, if it ruptures or it breaks, the capsule potentially could fall to the ground—and the recovery parachute wouldn’t have time to fully deploy and Felix wouldn’t have time to climb out. The whole flight train for the balloon’s recovery parachutes, drogue chutes, and the balloon itself, is about 700 feet tall; the balloon size is about 30 million cubic feet. The atmosphere has three definite zones where there are different densities in the atmosphere; there are times when the balloon will slow down and speed up again as its going through these different densities. The whole flight process will take up to three hours to reach float altitude.

Throughout the process, we’ll be tracking Felix with transponders, and there’ll be radio communication up and down. He’ll start checking his flow rates from the liquid oxygen system and liquid nitrogen system; he will constantly be trying to balance oxygen level in cabin. We don’t want it to go above 30 percent oxygen because of the potential fire risk. As Felix gets closer to altitude, he’ll check the bailout bottles on both sides of his parachute pack tray, and he’ll go ahead and open the valve for the bailout oxygen system on the parachute rig. He’ll turn off the oxygen from the capsule to verify that the oxygen flow on his bailout bottles is working. Then he’ll turn the oxygen back on in the capsule so that he’s not using the oxygen reserved for his jump. When he goes to depressurize the capsule, he’s got what’s called a dump valve that’s off to the right side. It’s a big handle that he’ll basically rotate forward, which will dump the internal pressure from the capsule.

It’ll dump from 8psi, the equivalent if he were at 16,000 feet, to the outside pressure, which is a fraction of 1 percent—virtually a vacuum. The cabin door will release from the pressure seals and become loose, at which time Felix will move his feet forward. He’ll lift up the clip on the side of the chair, slide the seat forward to the door, and rotate the door to the open position. There’s a little door lock mechanism that’ll flip over and lock it into the open position. Then he’ll disconnect the radio communication links from his chest pack, which is his hardwire link to the capsule. That automatically triggers the systems in his chest pack.

Because the faceplate in his helmet during freefall would fog up, the batteries in his chest pack will heat the faceplate to keep it clear. The GPS tracking and telemetry will also turn on, so when he’s in freefall we’ll be able to see where he’s at as well as record his altitude and speed. An XYZ accelerometer will tell us his body position and any kind of a roll or lateral movement, whether he’s head up or head down. There’s also a biomedical system: a chest strap with electrodes that will measure his pulse, his breathing patterns, and body temperature.

At the very last minute, he’ll disconnect his oxygen lines from his suit to the capsule. The capsule itself has enough liquid oxygen on board for him to stay aloft for 10 hours. It’s a very redundant system—we want to makes sure he has plenty of oxygen in the event he has to stay at altitude for any length of time. Once he disconnects from the ship’s system he’ll be on bailout bottles, and bailout bottles are good for at least 10 minutes.

The last thing Felix will do after disconnecting the oxygen is stand on the capsule’s step and look out over the black sky. One of the things we’ve added to the handrail is a burst switch. We have 9 high-def cameras on the capsule, and we have all these solid state circuit breakers that we can turn on and off, but we want to keep it simple: When Felix hits that switch, it’s going to burst images. You’ll see him step to the edge and give his famous salute, this time when he’s ready he’ll hit that switch and bunny hop off.

When he steps off he’s going to do so as softly as possible, because if he goes into a tumble, he can get into an uncontrolled spin, which could be terminal. There’s nothing to stop him. The drogue chute needs a certain amount of speed to be able to react. From that altitude, if he were to deploy a drogue as soon as he stepped out of the capsule, it wouldn’t have enough dynamic force to create any kind of tension. It could just wrap around him. He needs about 18 seconds before the drogue chute would even be useful.

But the plan is to not use the drogue chute unless necessary. We want to prove out that a person could do reentry from high altitude and utilize flight dynamics to control body positioning, and actually reenter at supersonic speeds without the use of a drogue chute.

About 35 to 37 seconds after his step off, he should be going Mach 1, around 690 mph. He’s going to break the speed of sound at a little above 100,000 feet. He could reach up to 740 mph. As he drops below 90,000 feet, he will start to enter more dense atmosphere, and that’ll start slowing him back down through transonic into subsonic speeds. By 90,000 feet he should be down to about 610 mph and will progressively slow. At about 5,000 feet he’ll deploy his main parachute. In the event something happens to the main chute, he also has a reserve of about the same size—265 square feet.

The total flight is probably going to take, including parachute time, about 15 minutes from the time he steps off the capsule to the time he reaches the ground. There will be five and a half minutes of freefall. Once he lands, we have a flight recovery team that will be there with a helicopter to check him out for any medical issues, makes sure everything’s okay.

Once we have him onboard the recovery helicopter, we’ll go ahead and release the capsule from the balloon. Above the capsule is a recovery parachute, and above that is a cutter and a mechanism to detach the balloon. We send a radio command to the cutter; it has a lead that goes all the way to the top of the balloon. That lead will pull what’s called a tear panel out of the scientific balloon to release all the gas. As the tear panel gets to the bottom, the balloon will disconnect. The capsule will go into a freefall with the recovery chute, and the balloon, which is about the size of a football stadium, will float down to the ground in a big clump.

The chute is reefed so that it’s only party open, which stabilizes it as it falls. At 10,000 feet, a barometric sequencer will trigger the parachute to fully deploy. It’s a military cargo chute designed to minimize sway. In the event Felix has to come down in the capsule, we want to make sure it’s a stable ride; the last thing you want is for somebody to get sick inside a spacesuit.

Everything will be sequestered when Felix lands. The final record verification is in the data recorder in his chest pack. Brian Utley [the official observer for the Contest and Record Board of the NAA] will take the chest pack, pull the data chip out, run through the calculations to verify the GPS and temperature, and should be able to give us preliminary verified Mach speed within an hour of landing. That’s the plan.

*_ This article has been updated to reflect recent changes to the flight program._