A brief history of the foundation of life, distilled to its foundation. 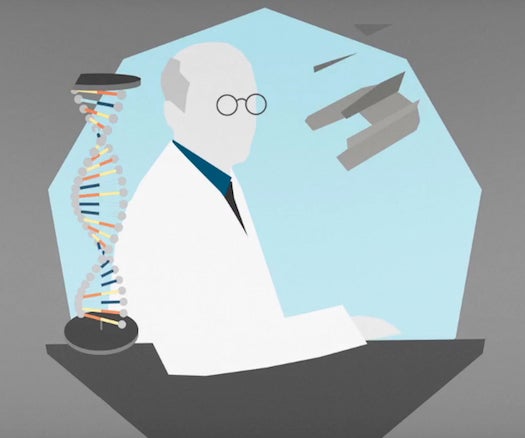 This short history of DNA from the BBC really knocks it out of the park, both artistically and scientifically.

Territory Studio was commissioned to create the video, part of a series of three-minute-ish explainer documentaries. Lead designer and animator Will Samuel explained the process behind it on Vimeo:

We needed to find a graphic style to communicate the beauty and intricacy of DNA. We wanted to create nostalgia; taking the audience back to the days of textbook diagrams and old science documentaries, such as Carl Sagan’s COSMOS and IBM’s POWER OF TEN (1977). Using the double helix circular theme as a core design we focused on form, movement and colour to create a consistent flow to the animation, drawing on references from nature, illustrating how DNA is the core to everything around us.

Writer Andrew S. Walsh and molecular biologist Matthew Adams worked together to distill the history of DNA down to the basics, but the result isn’t dumbed down. The video takes you from the just-the-facts chemistry on DNA to where research on it might go in the future.