Serge Haroche and David Wineland have figured out how to measure quantum systems without disturbing them, enabling the first steps toward quantum computers. 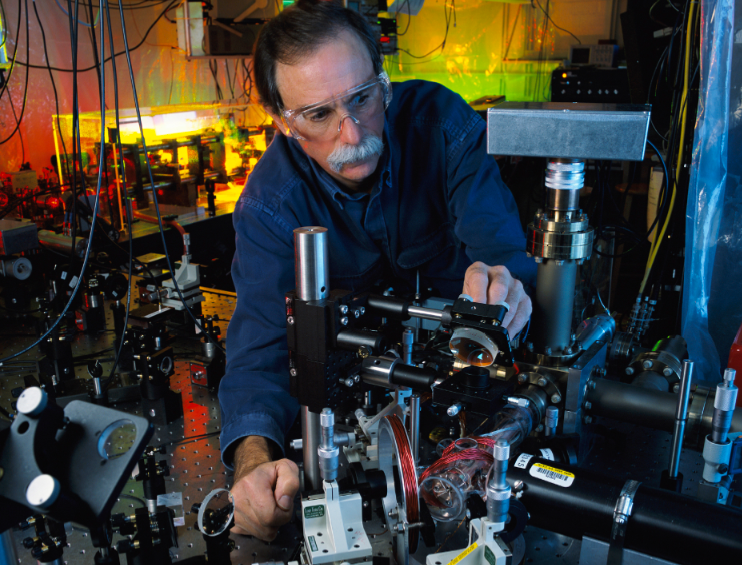 Whether it’s secure communications through particle teleportation or superfast computational capability, quantum mechanics, that mind-boggling world of the tiniest of the tiny, is at the forefront of modern physics. But this future technology would not be achievable–none of it would even be testable–without the breakthroughs achieved by this year’s physics Nobel Prize winners.

Serge Haroche and David Wineland both developed ways to control and measure fragile, fleeting quantum states, which was thought to be impossible. Their work has enabled real-world studies, not just theoretical discussions, of the relationships between light and matter at the smallest possible scales, where the regular laws of physics break down. The very nature of quantum mechanics made their work seem impossible, yet here we are.

To understand quantum uncertainty, start with Schrödinger’s cat. The fantasy feline exists inside a box in both its possible states at once: It’s both dead and alive, all things to all people in all scenarios. But as soon as you open the box, meaning as soon as you make a measurement of its state, the cat is only one or the other. Your measurement forces a choice, which equates to a change in the quantum system. This is the case for all quantum systems, which exist in all their states at once until you take a peek at them. Wineland and Haroche both devised ways of getting around this, explained Bill Phillips, Wineland’s colleague at the National Institute of Standards and Technology and himself a Nobel laureate.

Wineland was the first to describe and demonstrate the cooling of trapped ions, which are electrically charged atoms inside a vacuum. He traps them by surrounding positively charged atoms in an electric field. Then he shines a laser beam onto them, which effectively pushes on them, slowing them down. (Slower means cooler.) “Having them cold is very important in controlling them; when they’re really cold, you can do interesting things with them,” Phillips said. Here are a few examples:

Every clock needs a ticker to count forward in time, and the best ticker is an atom itself; even better is a single atom, all alone and uninterrupted by any other thing, even another atom. NIST specializes in building atomic clocks, and Wineland’s trap has been used to make the most accurate clocks ever. “He was able to make a clock that is so good–it is the best clock ever made–that if it operated over a long period of time, it would only gain or lose a second in 3 billion years,” Phillips said. “This is what we call ‘close enough for government work,'” he added with a laugh. This supremely accurate clock has been used to measure Einstein’s theory of relativity and the effect of gravity on the passage of time.

Two places at once

The laser light can also be used to put the ion in a state of superposition–just like Schrödinger’s cat, it can be in two different states at once. Wineland’s methods put the ions into two different energy levels. It starts out at a low-energy state and a laser pulse nudges it just so, almost-but-not-quite, toward its higher energy state. In this way, it’s a halfbreed stuck between two levels, in superposition of energy states.

“Dave would probably say it was a Schrödinger kitten, or an embryonic kitten. But it’s the kind of thing that demonstrates what is so weird about quantum mechanics,” Phillips said. “It was only possible because of the advances that Dave made.”

This energy limbo can be studied, also using the laser to scatter photons in a measurable way. 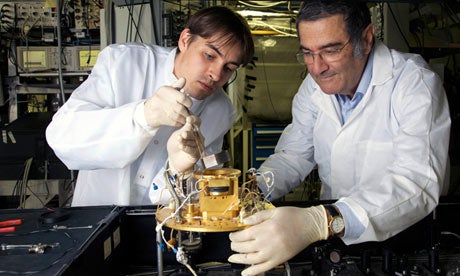 Serge Haroche and a Cavity Experiment

Haroche, right, and his assistant Igor Dotsenko are setting up a cavity experiment in this image from the French National Center for Scientific Research.

For his part, Haroche uses a microwave cavity to trap photons, which are particles of light. Then he uses atoms to measure what they are doing. The photons will induce a change in the energy state of the atoms, thereby providing information about the photons. This is called quantum entanglement; whatever happens to the photons happens to the atoms, too, allowing Haroche to study their transitions over time without actually measuring them directly. If you tried to look at the photons with any kind of detector, it doesn’t work, Phillips explained.

“When you do that, the detector eats the photons. They’re gone. What Haroche did is put them in the cavity, confirm they are there, and send an atom in. It sees the light–it’s really microwaves–and the certain intensity of those microwaves. On the basis of that intensity, the atom can start to change its quantum state.”

The superposition imposition is also the basis of quantum gates, which are a crucial element of quantum computers, Phillips noted. Wineland’s group was the first to demonstrate a quantum operation with two quantum bits. Someday, this might be used to create a quantum computer free from the trappings of binary code. Instead of either a one or zero, a quantum bit is both zero and one. Two qubits can be four things at once–00,01,10,11–and so on, until you reach a 300-qubit computer holding more possible states than all of the atoms in the universe.

Haroche can also build a quantum system whose initial state is unknown. This is hugely important for quantum computers and cryptography. You can start with an undetermined number of photons and make a series of measurements, intentionally afflicting change on the system and narrowing down the range of photons that you can guess might be in there. Secondary measurements, maybe by using atoms of a different speed, would provide further insight and tell you how many there are and what they’re doing. “What you did by virtue of the measurement is make it choose, choose which of those it was,” Phillips said. “You forced nature to choose, of the different possibilities that it had inherent in it, which was going to be the one.”

John Haynes, vice president of publishing for the American Institute of Physics, said Haroche and Wineland have conducted some of the most influential research in modern physics. “Quantum mechanics was once just theory and philosophy, but through this work and the ongoing research of others, we are now testing, manipulating, and building upon these scientific principles,” he said. 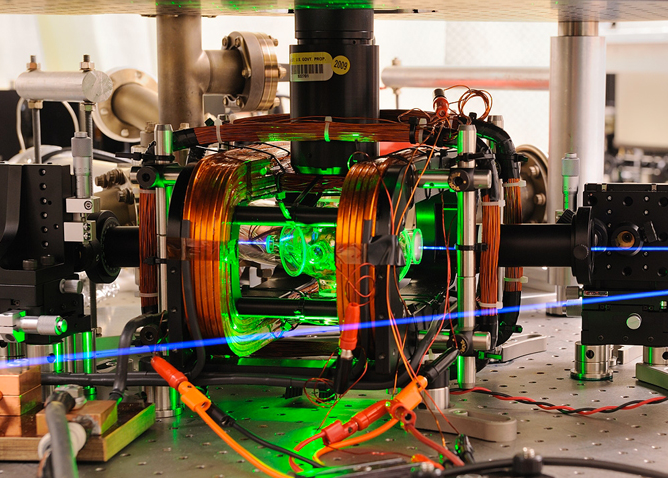 This is a composite photo of a microwave apparatus used in NIST quantum computing experiments. A pair of ions are trapped by electric fields and manipulated with microwaves inside a glass chamber at the center of the apparatus. The chamber is illuminated by a green light-emitting diode for visual effect. An ultraviolet laser beam used to cool the ions and detect their quantum state is colorized to appear blue.
Physics
quantum physics