Which Continent to Put the Largest Radio Telescope On? Why Not Share It

Splitting the world’s largest radio telescope across half the Earth could resolve an international quarrel that is brewing between two... 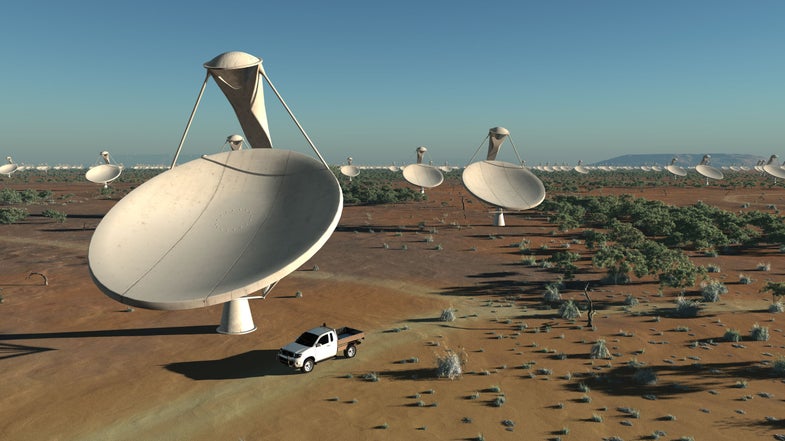 Splitting the world’s largest radio telescope across half the Earth could resolve an international quarrel that is brewing between two continents, researchers say. Australia and South Africa are vying to host the Square Kilometer Array, which will peer back to the early universe, and now it’s getting political.

The SKA will be an enormously expensive array, requiring ultra-powerful computers to process its extreme amounts of data, and whichever country hosts its dishes will see a raft of new funding and international astronomical prestige. Last month, South Africa won the recommendation of the SKA Site Advisory Committee, which found the country offered slightly better opportunities, Nature News reports. But officials in Australia and New Zealand, the other competitors, have ramped up their lobbying efforts.

The SKA planning teams met last week in the Netherlands to discuss next steps, and now they’re considering dividing up the 3,000 antennas and other equipment between the two sites.

“[The members] noted that it is important to maximize the value from the investments made by both candidate host regions,” SKA Organization leaders said in a statement. The organization set up a small working group to explore how this could work. One option, likely the cheapest, would set up the array’s high-frequency antennae on one continent and the low-frequency array on the other, according to Nature News.

If this really happens, it will introduce even greater logistical challenges to an already overwhelmingly complex project. Data crunching, storage and transport is already a massive challenge for the SKA, which will require the next generation of supercomputers to work efficiently. Dividing this work among two continents separated by hundreds of thousands of miles would be even trickier — imagine the latency challenges, for instance.

The working group is scheduled to report back at the next meeting in mid-May.