Video: Qbo Robot Learns to Recognize Itself in a Mirror

Qbo (pronounced “cue-bee-oh”) is a newish robot designed by TheCorpora, which in addition to general cuteness boasts some impressive speech... 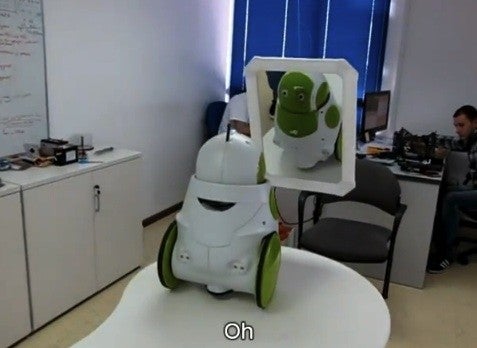 Qbo (pronounced “cue-bee-oh”) is a newish robot designed by TheCorpora, which in addition to general cuteness boasts some impressive speech and object recognition abilities. But what happens if you put an object recognition robot in a position to see…itself?

Qbo, to its credit, deals with this kind of existential crisis an awful lot better than I would. After identifying the Linux penguin as simply “penguin” (Qbo is built on Linux, hence that particular choice of penguin), Qbo encounters a mirror. “Who is this?” says Qbo’s handler, in a statement that would break the will of a lesser ‘bot. After being told that the image in the mirror is itself, Qbo then utters exactly the kind of statement we all wish we could say when looking at ourselves in the mirror: “Oh, this is me. Nice.”

According to the Qbo blog, this is definitely a designed reaction–Qbo was programmed to utter those phrases when its various shape- and face-recognition tools identified itself in the mirror. But it’s still a curiously touching moment, and the Qbo folks are working on a few further developments–namely, autonomous recognition (so Qbo won’t have to be told that the object in the mirror is itself) and a way to distinguish so if presented with another Qbo, the first won’t assume the second is itself in a mirror.

[The Corpora via Engadget]