A bipedal robot developed at the University of Michigan can run with a human-like gait, the fastest-ever robot with knees....

A bipedal robot developed at the University of Michigan can run with a human-like gait, the fastest-ever robot with knees. Feedback algorithms are helping Mabel, a headless robot with impressive gams, to keep its balance as it runs in a round pen.

Few robots can run period, but only Mabel can run with such human-like qualities, according to Michigan researchers. Its weight is distributed like a human’s, with a heavy torso and light, flexible legs. Springs in the legs serve as tendons, allowing Mabel to bound like a real runner — it spends 40 percent of each stride in the air, while other running robots are more like speedwalkers, lifting off the ground for only 10 percent of each step. 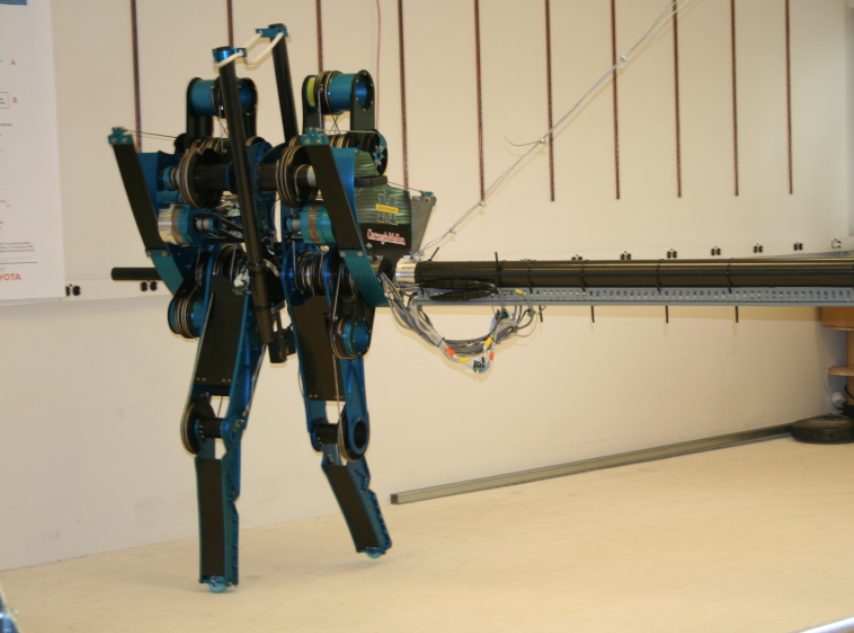 Mabel is believed to be the fastest bipedal robot, according to the University of Michigan.

The robot started off walking quickly over flat surfaces, and its programmers started improving the feedback algorithms that help it maintain its posture, according to a Michigan news release. Mabel does not quite run free, only moving attached to a metal bar like a horse at longeing.

Mabel’s programmers believe the robot’s realistic gait could be helpful for several applications, from powered prosthetic limbs to robotic exoskeletons. Or imagine a legion of robot runners that a human could ride, ostrich-style.

Home robots and rescue robots with a human stride could also be more effective than the cautious, two-step gait of other humanoids, according to Jessy W. Grizzle, who leads the lab where Mabel was built.

“If you would like to send in robots to search for people when a house is on fire, it probably needs to be able to go up and down stairs, step over the baby’s toys on the floor, and maneuver in an environment where wheels and tracks may not be appropriate,” he said.

Mabel was built back in 2008 and researchers have been tweaking its design and programming. In the most recent tests, Mabel reached a top speed of 6.8 miles per hour, a pretty good clip. Watch it run below.

[University of Michigan via IEEE Spectrum]