Subscription music services, in which you pay a monthly fee (usually around $10) and get unlimited access to a huge... 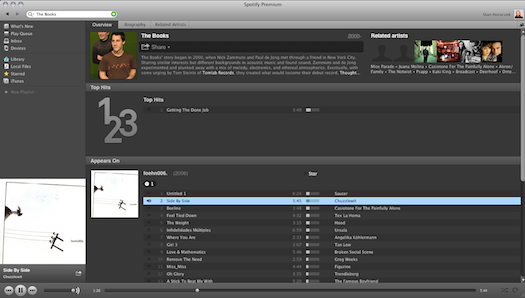 Subscription music services, in which you pay a monthly fee (usually around $10) and get unlimited access to a huge music catalog, aren’t new. Here in the States, we have Rdio, Rhapsody, Zune, MOG, and Napster, none of which have come anywhere close to supplanting iTunes, whose a la carte music purchasing store is the dominant digital music venue in the country. But not so in Europe, where a service called Spotify, one not so different from, say, Rdio, is without doubt the default way for the digitally-minded to get their music. As of today, Spotify is now available in the U.S., and digital music in this country may never be the same.

The idea with these subscription services is that there must be a way to make a legal service that’s more desirable for consumers than piracy. iTunes is not; it’s legal, but in its actual mechanics, it works essentially the same way as less legal options like BitTorrent. The service itself isn’t better; it’s just legal. Subscription services have a totally different philosophy, one closer to streaming video sites like Netflix and Hulu than iTunes. You pay a small amount, usually $5 or $10, for unlimited access to the catalog. You don’t download everything; you can download, of course, for listening while you don’t have access to the internet, but mostly, you’ll be streaming. Your collection becomes even more ethereal than a digital collection, because you’re not even in possession of the hard drives on which your music is stored. It’s a fundamental shift. iTunes is a store; Spotify and its ilk are a service.

Using one of these services gives music fans the same almost visceral “this is the future!” feel that gadget nerds got when they played with the Kinect or iPad. The good ones, like Rdio, create a “collection” from your iTunes library. That means you can access your entire music collection from anywhere–any computer, any web browser, any smartphone. We used to worry about carrying our music with us, having enough cassettes, enough CDs, enough storage on our iPods, enough space on our smartphones to be able to listen to what we want to listen to. Not anymore. Getting new music becomes incredibly casual–a friend mentions a band, and if you’ve got a smartphone and a subscription, you can add that band’s entire discography to your music collection in seconds. For no extra charge. It’s freeing in the best way.

But, like I said, subscription music services have mostly not been successful here in the States. Not that they aren’t good–I am a huge fan and excessive user of Rdio–but they are underused. Spotify has the buzz and the clout, and possibly the right features, to actually make a go of it here. So what’s different about Spotify?

To be honest, Spotify is not leaps and bounds ahead of, say, Rdio. Both boast coherent and easy-to-use mobile apps and software, along with an extensive catalog and some nice social sharing features–you can see what your friends listen to, make collaborative playlists and share them, that kind of thing. What Spotify does have are two new ideas, the first of which may be the thing that gets them in the door: a free version. No American subscription service offers a free version; many, including Rdio, offer a cheaper $5-per-month option that gives access to the web app but not to a mobile app, but none have a free version. Spotify comes in three tiers. There’s a free, ad-supported version, limited to the web; a $5 ad-free version; and a $10 full version that allows downloading for offline listening and use of the mobile app (available for iOS, Android, Symbian, Windows Mobile, and Palm WebOS, almost certainly with more to come–Windows Phone 7 and BlackBerry versions would not be unexpected).

The other unique feature, one we really like, is a cloud uploading service. Not every song is in the Spotify catalog–the Beatles, for example, but any serious music fan will also have a whole mess of niche or unsigned or otherwise unusual music that Spotify doesn’t have. With other services, that forces you to use two separate music apps, one for your subscription stuff and one for everything else, which is kind of confusing and awkward. But Spotify also allows you to upload your own music, which it integrates seamlessly into your collection. It’s a great idea, and one that almost certainly involved a lot of fighting with the record labels, but we’re glad they won that fight.

In my quick tests with Spotify today, I found it at least as good as Rdio. The PC/Mac app is fairly easy to use, as is the iPhone app (I haven’t tested it on Android or any other platform). The selection is about on par with Rdio or MOG, which means overall pretty good–some artists will have a whole bunch of rarities and singles and EPs, while some will be curiously lacking major sections of their discographies. But almost all the time, you’ll find what you’re looking for. The search function is not that great, oddly; it doesn’t autofill or make suggestions as you search, so your results tend to be very raw. A search for, say, “The Books” will give you any song, artist, or album that has the word “book” in it, when all you wanted was the artist actually called The Books. There’s a way to jump right into the artist page, but an autofill would be much cleaner. Once you do find the artist page, it’s very cleanly laid out and sound quality is fine, if not amazing (it typically streams at 160kbps Ogg Vorbis, which is adequate, though premium users can bump that to 320kbps Ogg, which is very nice for a compressed file).

The only other major flaw I found was the lack of a web app. Rdio (sorry to keep comparing it to Rdio but it is my favorite of the existing subscription services) has a sleek and full-featured web app that you can (and will) access from any web browser without installing anything. Over at a friend’s house and want to play a song? Log into the web app and play it. Easy! Spotify doesn’t have anything of the sort–it only has software for your computer or smartphone. Very lame.

But what was most apparent about my time with Spotify was speed. Good God, Spotify is fast. I’m used to Rdio, which never quite lets you forget that you’re streaming from the cloud–each song takes a couple of seconds to load, as do search results and browsing through new releases. But not Spotify: Every click is instantaneous, every song starts playing instantly. I have no idea how they did it, but it’s amazing.

I’m convinced that this kind of subscription music service is the future of music acquisition and collection. The idea of a conventional music “store” should have gone away when Tower Records did, and subscriptions are just the kind of forward-thinking replacement I’ve been hoping for. Is Spotify really that much better than the existing U.S. equivalents? Well, no, not really, though it’s definitely not worse. But that free, ad-supported option is an absolutely killer teaser for those who aren’t sure about these services–because lots of people will try it, and I think an awful lot of those people will decide to sign up.

Spotify is available now in its premium (either $5 web-only or $10 full) versions. The free version is invite-only for now, and invites are hard to come by.