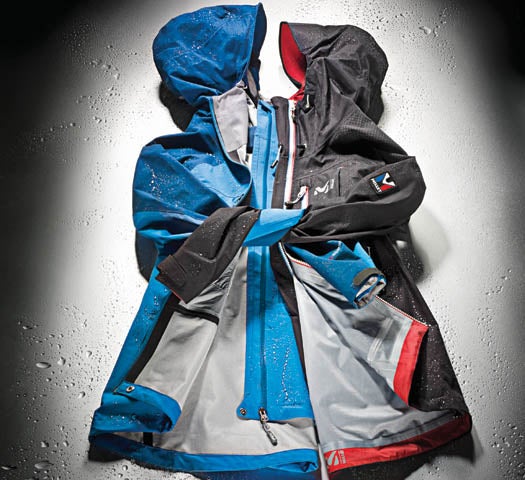 Rab Stretch Neo Jacket with Polartec NeoShell
Under a microscope, NeoShell’s permeable layer looks like spiderwebs spun from a polyurethane thread. The webs form tiny channels large enough that humid air can escape but small enough that water droplets (even those with the force of a 10-foot waterfall) can’t get in. A polyester lining and durable outer-face fabric sandwich the layer and are fused to it with pinhead-size dots of adhesive, which keeps channels clear and air flowing. The Rab Stretch Neo Jacket is available from Rab for $365.

Millet Trilogy Limited GTX with Gore-Tex Active Shell
Thinner and lighter than its predecessor, Gore-Tex’s Active Shell fabric features a porous membrane that looks like cotton candy up close. The fabric bonds directly with a moisture-wicking lining, eliminating a heavy layer of adhesive and trimming a few ounces off the jacket. An outer-face fabric attaches with microscopic glue dots; this way, the pores (about nine billion of them per square inch) don’t get gummed up. You can find the Millet Trilogy Limited GTX jacket at Millet for $400.

For one month this winter, four testers wore both jackets while skiing front- and backcountry in the mountains of Vermont, Colorado and Utah. Conditions ranged from snow squalls to bright sunshine, and temperatures varied from close to freezing to as low as –30ºF.

All four testers felt consistently more comfortable in the 17-ounce Polartec shell, despite the Gore-Tex’s jacket being three ounces heavier. Testers had to physically air out the Gore-Tex jacket by unzipping its armpit vents, whereas sweat evaporated quickly out of the ventless Polartec.