The Office of Naval Research is seeking fresh tactics for fighting the problem of Somali piracy, and it is turning... 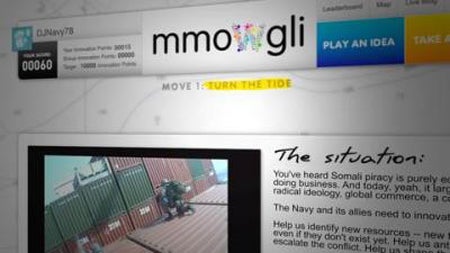 The Office of Naval Research is seeking fresh tactics for fighting the problem of Somali piracy, and it is turning to the defense community via an increasingly common tool for crowd sourcing tactical advice: a video game. ONR’s Massive Multiplayer Online Wargame Leveraging the Internet (MMOWGLI) exercise will gather more than 1,000 players into a three-week scenario where they’ll deal with the complex nature of a changing and evolving threat.

It’s safe to say MMOWGLI won’t look like a massive multiplayer round of Black Ops or Counter Strike. ONR isn’t looking for players that are particularly adept at collecting frags with a virtual rifle, but rather for minds from academia, the defense industry, government organizations and other defense- and naval-related fields that might produce solutions to a set of difficult problems. Like how to defend a growing swath of a major shipping lane from determined bandits in small, fast boats.

But it’s also looking for suggestions from the larger crowd, as the game is open to anyone who wishes to sign up. Gameplay is more like tweeting. Log in and two text boxes appear. One asks what new resources could turn the tide in the fight against Somali piracy. The second asks what new risks could arise that would transform the piracy situation. You get 140 characters to answer each.

Players then vote on each other’s suggestions and, if they wish to, make suggestions to improve them. The more “yea” votes a player gets, the more points he or she stacks up. There are three rounds, one week per round. By the end of the game the ONR hopes to know two things: how it might solve the Somali piracy problem, and whether or not MMOWGLI actually works. If it yields successful solutions to the piracy scenario, it could be applied to a variety of difficult global problems in the future.