You may not have heard about it during your local traffic report this weekend, but anyone negotiating the Beijing-Tibet expressway... 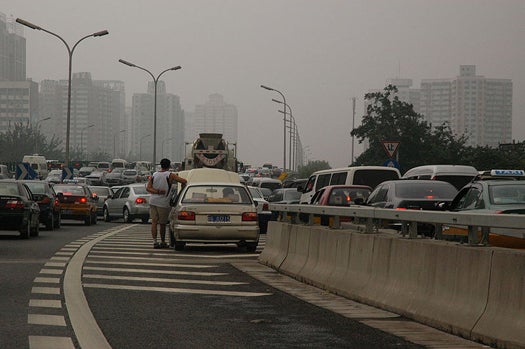 You may not have heard about it during your local traffic report this weekend, but anyone negotiating the Beijing-Tibet expressway in recent days is painfully aware of the problem: a 62-mile jam that slowed traffic to a crawl between the Chinese capital and Jining city. But while such huge traffic jams aren’t unheard of, China’s traffic woes are unique in their duration – the current traffic snarl (it’s still ongoing) has been unfolding since August 14, making for nine days of gridlock.

While initial reactions to that news might range from awe to genuine pity for the commuters stuck in that mess, the jam also highlights massive opportunity for the Chinese. While Detroit declines, China is quickly becoming the world’s largest auto economy. China is selling passenger cars to its own citizens at a pace that seems unfathomable during an overall global economic decline (last year China automotive market moved 13.6 million cars, compared with 10.4 million in the U.S.). China is also on the brink of becoming a major automotive exporter, meaning Chinese manufacturers and designers will soon be deciding what commuters drive in other parts of the world.

But while China has also laid down massive amounts of pavement to accommodate that growing market (along with more than 100 airport projects around the country and ever-faster, ever-expanding rail infrastructure), the country can’t keep up with the pace of traffic, periodically allowing the amount of cars to overwhelm the freeway system. The current traffic jam follows similar snarls in June and July and was caused by a spike in cargo truck traffic heading into Beijing. Maintenance work (repairing damage caused by the increased cargo traffic) compounded the problem, and until that project is finished next month the gridlock is expected to continue. The point being, China can keep adding highway lanes but the Chinese are already purchasing the cars with which to fill them.

These are the kinds of problems that can lead to innovative solutions, making China a promising test bed not just for automotive technologies but groundbreaking new transit platforms and fresh thinking in city planning. Planning happens to be China’s strong suit, and lacking those annoying regulatory hurdles that might hinder grand visions in other nations the country has the ability to drastically reorganize itself via truly big infrastructure projects.

China is not afraid to gamble either; when we wrote about the “straddling bus” earlier this month, it looked like one of those half-cocked schemes that are technically dazzling but outside the realm of practical application. Yet China has already mapped out 116 miles of Beijing roadway to test the experimental 1,200-passenger electric buses, with infrastructure upgrades beginning by year’s end.