Smuggling a nuclear weapon into the U.S. is distressingly simple—all someone needs is a truck full of watermelons. Regulations prohibit... 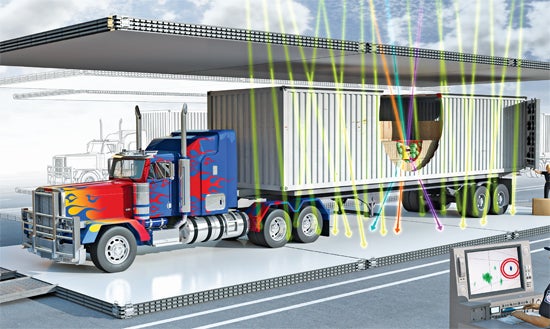 Smuggling a nuclear weapon into the U.S. is distressingly simple—all someone needs is a truck full of watermelons. Regulations prohibit using high-power x-rays on perishables, and Geiger counters don’t beep alerts because the juicy fruit absorbs radiation. But a new drive-through detector takes advantage of cosmic rays to locate any nuclear material, no matter how cleverly hidden.

Only a few percent of the 15 million or so cargo containers that enter the country every year are screened for nukes, a number that Congress mandates must be 100 percent by 2012. That benchmark is impractical using today’s tech, however. Standard detectors can miss nuclear material hidden behind lead or steel, and naturally radioactive cargo such as kitty litter gives false positives, requiring a labor-intensive hand-search.

A new detector from Decision Sciences, a security company in California, sees through anything and can scan a semi in less than a minute. It tracks muons, cosmic particles constantly bombarding Earth. Muons penetrate everything but are deflected more by heavy atoms such as uranium and plutonium. The detector tracks these deflections.

The company finished lab tests this spring and is now building detectors to deploy at several ports in the next year. “As long as it works quickly enough, it should fit the bill,” says Robert Dynes, a physicist at the University of California at San Diego who reviewed radiation detectors for Homeland Security. Tests indicate that the device should be speedy on real cargo, says Decision Sciences’s chief technology officer, Allan Wegner. And it’s nearly foolproof. Wegner can’t go into detail about its weaknesses (for obvious reasons), but he assures us that kitty litter and watermelons will no longer threaten national security.