Hold on to your hoverboards. Nike has filed a patent on some technology that takes us right back to 2015:... 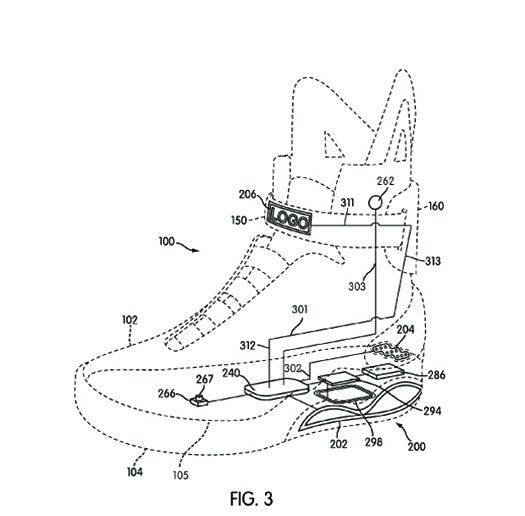 Hold on to your hoverboards. Nike has filed a patent on some technology that takes us right back to 2015: self-lacing sneakers that tighten or loosen your kicks just like the ones McFly donned in Back to the Future II.

Perhaps self-lacing is a stretch. To quote the patent filing: “The automatic lacing system provides a set of straps that can be automatically opened and closed to switch between a loosened and tightened position.” Meaning they will have cinching straps rather than actual laces. But let’s not mince words here, because these are awesome shoes.

They work by concealing a tiny battery-driven motor in the heel, though the plans don’t specify the exact mechanism by which the wearer will signal the shoes to tighten up (the words “button,” “switch,” and “weight sensor” are all buried in the text). It also leaves the door open for a variety of self-lacing gear, including “skates, boots, ski boots, snowboarding boots, cycling shoes, formal shoes, slippers or any other kind of footwear.’

They’re only a concept, so don’t expect next year’s Hyperdunks to sport the technology. But as GadgetLab points out, it would be pretty cool to see it in stores by 2015.