Last night the normally hazy sunset off the southern California coast was interrupted by a missile streaking upward and across... 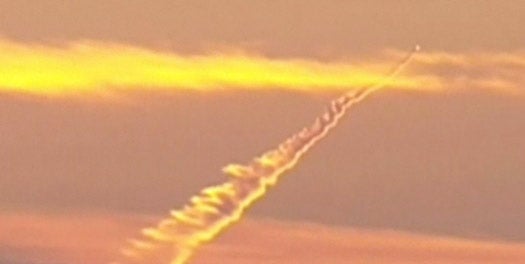 Last night the normally hazy sunset off the southern California coast was interrupted by a missile streaking upward and across the sky, captured by a local CBS News affiliate’s helicopter camera. But no one from the Navy to the Air Force to the brass at the Pentagon is saying definitively what the object was or where it came from, outside of the fact that it originated from somewhere at sea about 35 miles west of Los Angeles and north of Catalina Island.

The U.S. Navy would be the most obvious source for such a launch, but as yet Naval officials say no one in their ranks has claimed responsibility for the launch and there is no recorded Navy activity in that area at that time. Vandenberg Air Force Base in California said it launched a Delta II rocket carrying an Italian satellite into orbit on Friday evening, but it has not initiated any rocket activity since then. Whatever it was, it was no small rocket; the object left a huge contrail as it headed high into the atmosphere, reducing the chances that it was some kind of amateur launch, though the possibility can’t be ruled out.

KFMB, a local CBS station, took the video to former U.S. Ambassador to NATO and former U.S. Deputy Secretary of Defense Robert Ellsworth, who called the launch “spectacular” and confirmed that indeed it was quite a large rocket. He also said it didn’t appear to him to be a Tomahawk missile. He did speculate that with President Obama touring Asia at the moment the launch could have been a demonstration of an ICBM to show military might.

“It could be a test-firing of an intercontinental ballistic missile from a submarine . . . to demonstrate, mainly to Asia, that we can do that,” Ellsworth said. We used to rattle the saber toward the Soviets by such means during the Cold War. But, he emphasized, that is purely speculation and we should wait to hear from the Pentagon for concrete answers. The problem is, however, the Pentagon doesn’t seem to know anything about the launch, so for now the mystery missile remains a mystery.