At PopSci we’re comfortable with the concept of time travel, but this story is perhaps a bit more than we... 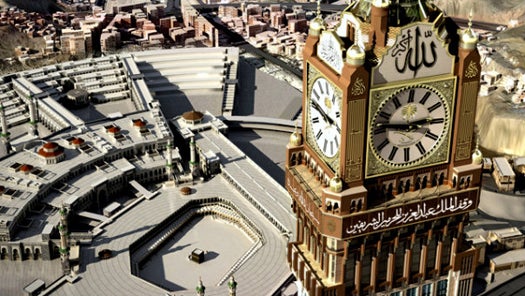 At PopSci we’re comfortable with the concept of time travel, but this story is perhaps a bit more than we can wrap our heads around. The Saudi Arabian city of Mecca is building the biggest clock in the world — a massive 1,983-foot tower sporting four timekeeping faces each 151 feet in diameter — with the goal of displacing Greenwich Mean Time as the world’s central time zone.

While we’ve heard of the notion of large, dense bodies generating enough gravity to alter the flow of time, we’re not quite sure the massive clock, which starts ticking today, has that kind of pull. Although it is an impressive piece of architecture, bearing a resemblance to London’s Big Ben but with some uniquely Arabic touches. The clock will don text reading “in the Name of Allah” running beneath the clock faces in the local script as well as 21,000 green and white lights that flash five times daily to call the faithful to prayer (supposedly they can be spotted from more than 18 miles away).

Anyhow, the very idea of moving the global reference for time to the Islamic capital and associating it so blatantly with a particular religion is probably not going to go over so well with many people, especially in the West (those Greenwich folks are a proud bunch). After all, Greenwich Mean Time was established arbitrarily a long time ago simply because Britain was a maritime power at the time. And now that we’ve calibrated our timekeeping to GMT and our cartography to the Prime Meridian, it’s unlikely everyone will want to change just because the Saudis built a clock.

But you can’t blame them for trying. And did we mention it’s a really impressive clock?