A method developed at MIT and modeled after seashells could provide a new way to sequester carbon dioxide — by... 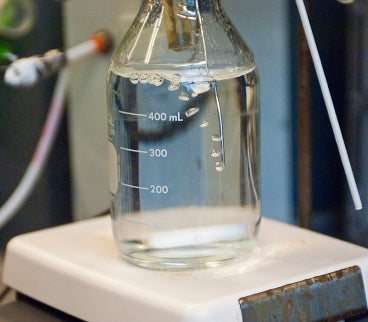 A method developed at MIT and modeled after seashells could provide a new way to sequester carbon dioxide — by using it to manufacture new carbonate building materials.

To reduce the amount of carbon dioxide in the atmosphere (and therefore lessen global warming), some researchers are studying ways of sequestering it in underground reservoirs. But this is expensive and difficult, and has not yet been achieved on a large scale. MIT engineer Angela Belcher is leading an effort to remove CO2 from the atmosphere and construct buildings out of it.

To make the CO2 bricks, Belcher and her graduate students modified baker’s yeast to express genes that are normally found in sea creatures like abalones, which make hard carbonate shells. Carbon dioxide is bubbled into water, and then combined with mineral ions to make solid carbonate materials. Enzymes in the yeast help the mineralization process.

The process can produce two pounds of carbonate for every pound of captured CO2, according to MIT.

Other environmentally friendly bricks use fly ash, a byproduct of coal power plants, or even sand and urine. Bricks made of CO2 could solve two problems by sequestering CO2 and eliminating additional CO2 emissions from traditional brick-making.

Belcher and her graduate students are not the first to propose solidifying captured CO2, but they are the first to prove a biological process works. It involves no chemicals or temperature changes, unlike chemical solidification methods.

The researchers hope to scale up the process so it could be used in a power plant or industrial factory.