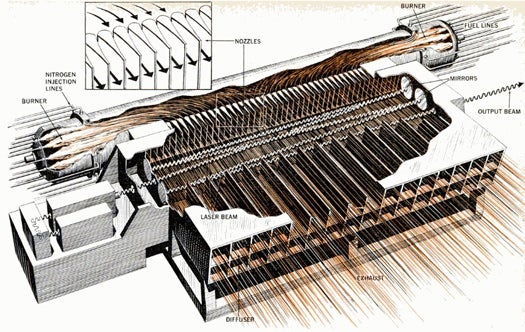 Although military applications of lasers were kept largely a secret, we published an article that pieced together bits of information to conclude that laser radiation weapons would soon reach perfection. We reported that military researchers had used a laser beam to shoot down a drone. Additionally, the Air Force thought it possible to build a space-based laser system that would guide missiles into targeted countries. Military planners also cooked up a laser defense system, which would disable incoming missiles in just seconds. Just nine years later, however, President Reagan's controversial Strategic Defense Initiative ("Star Wars") would research lasers as defensive weapons and test concepts for an X-ray laser beam. Read the full story in "Laser Weapons -- How Close Are We?".
SHARE

It’s hard to look at military spending without wondering what’s behind the scenes.. For instance, in this month’s issue of Popular Science, we investigate what exactly the Pentagon is getting for the $58 billion it has dropped on classified assassination weapons.

A peek in our archives revealed that Popular Science has a long history of investigating top-secret operations. We didn’t hesitate to publish an expose on “loony gas” warfare in 1960, nor did we refrain from sending one of our reporters into Groom Lake’s unofficial airfield.

One of our earliest mentions of the military’s “black budget” occurred in March of 1993, when civilians claimed to catch glimpses of the Air Force’s hypothetical, hypersonic Aurora aircraft. Although we can only guess at the details of aircraft experimentation, we do know that there’s a lot of money being funneled away in the name of fighting terrorists.

While the Age of Terrorism is a fairly recent concept, government secrets go back as long as we can remember. Everyone loves a good speculative theory, and while time has rendered some secrets, like Nazi Germany’s rocket weaponry, common knowledge, other operations remain shrouded in code words and confidential reports.

Sound intriguing? There’s a lot more where that came from. Launch the gallery and join us as we investigate history’s most enigmatic military tech. 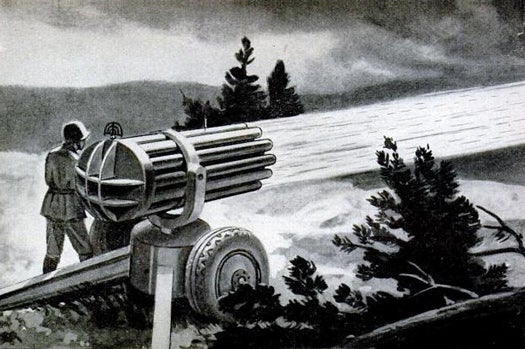 During World War II, we wrote, “It is a safe bet that every major military power is experimenting with rocket devices, although all of them regard the work as highly secret.” We speculated that German reports of “secret [rocket] weapons” were mere propaganda, while Britain had developed a mysterious mechanism that could release ten rockets in mid-air. Unfortunately, we were mistaken: in 1944, Germany launched a number of V-2 rockets over Paris, Antwerp, and London, among other targets. The Allies’ rocket weaponry program depended largely on the Soviets’ Katsyusha rocket launchers (similar to the one pictured left), which were less expensive than the V-2s, but which were also troublesome to reload. After the war, the United States recruited several German engineers for another hush-hush program, Operation Paperclip, which asked former Nazi scientists to adapt V-2 technology for use by the United States. Read the full story in “Secret Rocket Weapons Blast Tanks and Planes” 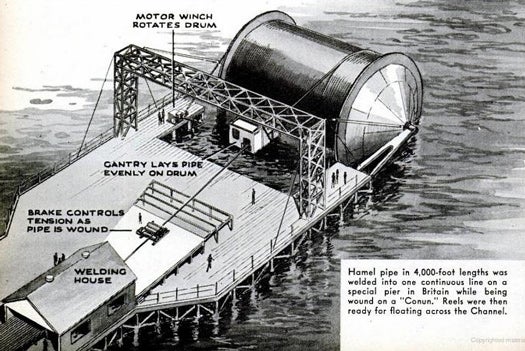 The same month Japan surrendered to the Allies, we published an 8-page piece called “Now It Can Be Told!,” which showcased “secret devices developed by American and British Engineers to Beat Germany.” One such achievement was Operation Pluto, which laid out 20 pipelines under the English Channel. The pipelines, which eventually pumped 1,000,000 gallons of fuel to Allied armies in France, were made of two types of tubing. One type, the Hamel, was made of malleable steel. Pictured left is the “Conun” drum, which transported Hamel pipes across the Channel in a giant spool. Read the full story in “‘Pluto’ — The Undersea Pipe Line” 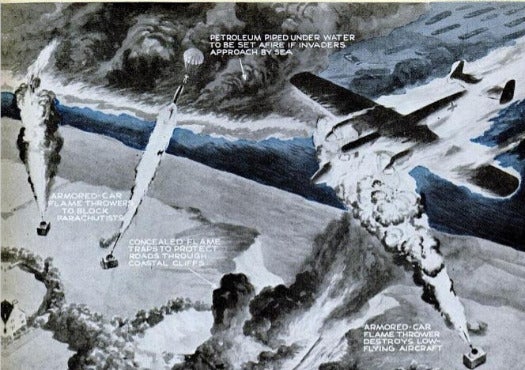 Another one of the Allies’ secret projects equipped English shores with technology designed to consume Nazi invaders in a deathly inferno. At that point, British troops had left most of their heavy weapons in Dunkirk, so they took precautions against home attacks by installing flame throwers on the beaches, oil pumps on cliffs, and “hedge-hopping drums of gasoline that would form rivers of fire” on the roads. Flame throwers could shoot 100-yard sheaths of fire at incoming paratroopers, while an ocean-borne “belt of flame” would form when lit by lighting oil from underwater pipes with calcium phosphide. Read the full story in “British Fire Traps Awaited Invaders” 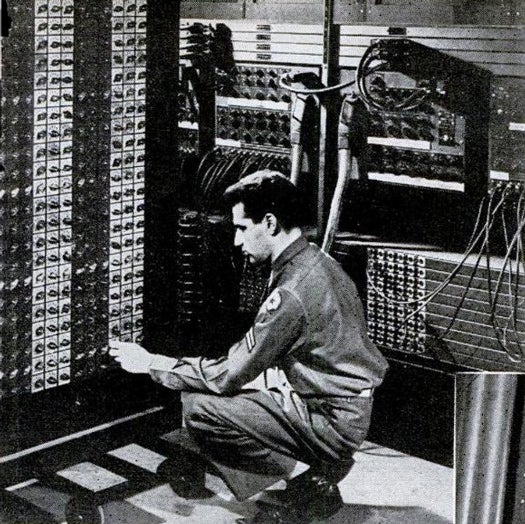 In 1946, the Army announced ENIAC, short for Electronic Numerical Integrator And Computer, which was quickly lauded as the “Giant Brain.” ENIAC, the first general-purpose electronic computer, astounded scientists with its ability to compute mathematical equations at lightning speed. Compared to other computer projects, like the UK’s Colossus machine, whose existence was unveiled only in the 1970s, ENIAC’s existence became public knowledge soon after its conception. The United States Army funded and commissioned work on ENIAC during World War II. Initially, the operation was begun in secret at the University of Pennsylvania under the code name “Project PX.” Read the full story in “Lightning Strikes Mathematics” 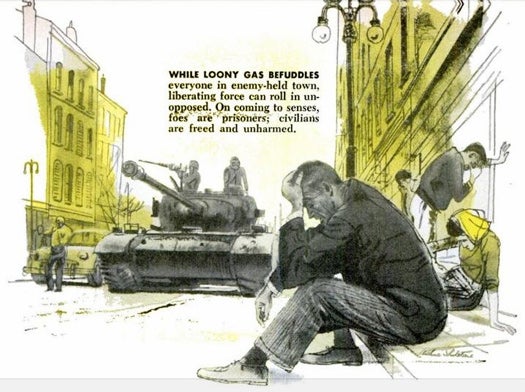 “Secret U.S. tests, now revealed, show startling military uses for weird new chemical agents,” we reported in 1960. The so-called “loony gas,” which we believed could incapacitate enemies without actually harming them, turned out to be LSD. Although we acknowledged that LSD could make people “daffy,” we also stated that these psychochemicals were more or less humane. That is, the military could saturate enemies with LSD and take over their towns, without destroying them, before the people recovered. At that point, the Chemical Corps would not reveal the source of their LSD supply, but they did express excitement at the prospect of infecting an enemy water supply with the drugs. “If we did this to Congress we could possibly have you dancing on the desks, or shouting Communist speeches,” Major General William M. Creasy, former Chief Chemical Office of the Army, told the House committee. Although LSD remains a popular recreational drug, it is no longer being considered by the United States as a war weapon — well, as far as we know. Read the full story in “Can ‘Loony Gas’ Win Wars Without Bloodshed?” 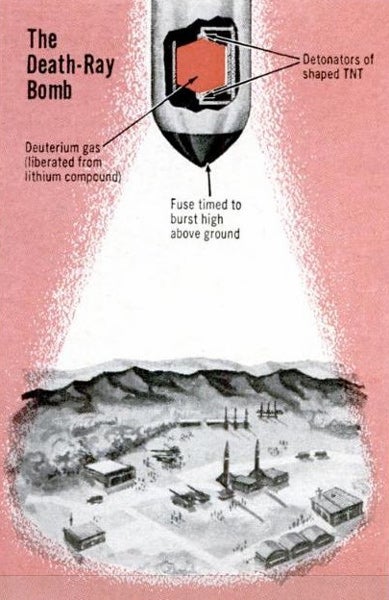 “Are the U.S. and Russia readying a new and terrible ‘neutron-ray’ weapon?” we asked during the Cold War. We imagined that the n-bomb, which was conceived by Samuel Cohen of the Lawrence Livermore National Laboratory in 1958, would eradicate entire populations without damaging a single building or causing any radioactive fallout. “Officials in the know are, understandably, silent,” we said. “Yet a quick riffle through the published books on nuclear weapons indicates that the neutron bomb could be made. And that means we’re working on it, and they are, too.” Cold War paranoia or not, we were right to worry, as testing began in an underground Nevada facility in 1963. President Jimmy Carter postponed its development in 1978, only for President Ronald Reagan to resume it in 1981. So far, no country is known to have them, although many, including the United States and China, may be capable. Read the full story in “The Death-Ray Bomb”

Although military applications of lasers were kept largely a secret, we published an article that pieced together bits of information to conclude that laser radiation weapons would soon reach perfection. We reported that military researchers had used a laser beam to shoot down a drone. Additionally, the Air Force thought it possible to build a space-based laser system that would guide missiles into targeted countries. Military planners also cooked up a laser defense system, which would disable incoming missiles in just seconds. Just nine years later, however, President Reagan’s controversial Strategic Defense Initiative (“Star Wars”) would research lasers as defensive weapons and test concepts for an X-ray laser beam. Read the full story in “Laser Weapons — How Close Are We?” 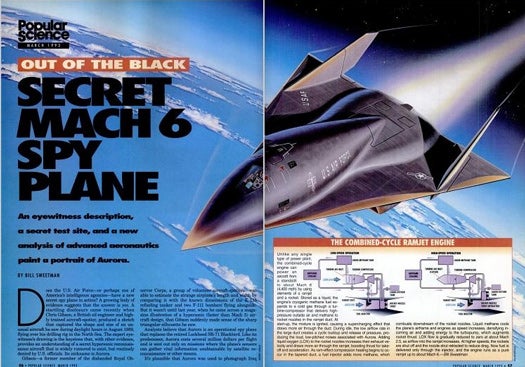 The early 1990’s saw major speculation on the government’s “black aircraft production” for a hypersonic airplane named Aurora. Analysts posited that the Aurora was a spy plane designed to replace Lockheed’s SR-71 Blackbird, a Mach 3+ strategic reconnaissance aircraft. We wondered if Aurora had secretly surveyed Iraq during Operation Desert Storm. Several sightings and sonic booms later, it’s still unclear whether or not the Aurora actually existed. Some people speculate that one Aurora was built, but that it failed. Ben Rich, the former head of what is now Lockheed Advanced Development Company has denied the Aurora as a hypersonic plane, claiming instead that “Aurora” is a code name for a different project. But what are we to make of the Air Force’s $9 billion budget hole? Whatever the case, the Aurora talk declined after the aircraft was reportedly passed over for research into unmanned hypersonic gliders. Read the full story in “Out of the Black: Secret Mach 6 Spy Plane” 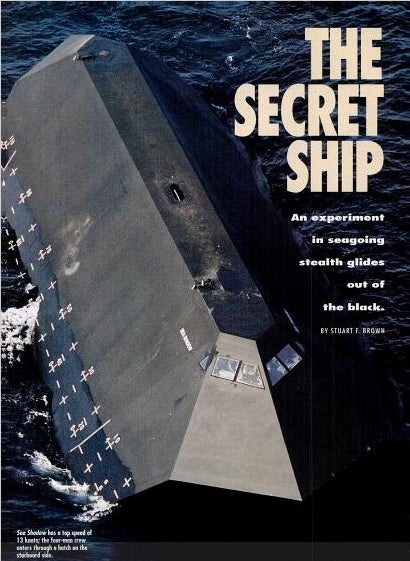 The first public glimpse of the Navy’s Sea Shadow occurred in 1993s, when onlookers spotted the curiously helmet-shaped vessel emerging off the coast of California. Sea Shadow had been kept a secret since 1986, when the Navy quietly tested its capabilities as a stealth ship. Could it maintain low radar visibility? Could it evade sonar sensors? Additionally, its Small Waterplane Area Twin Hull, or SWATH, boosted the vessel’s stability. Automation technology enabled Sea Shadow to operate with minimal human guidance. The ship was decommissioned in 2006 and is currently up for donation. Read the full story in “The Secret Ship” 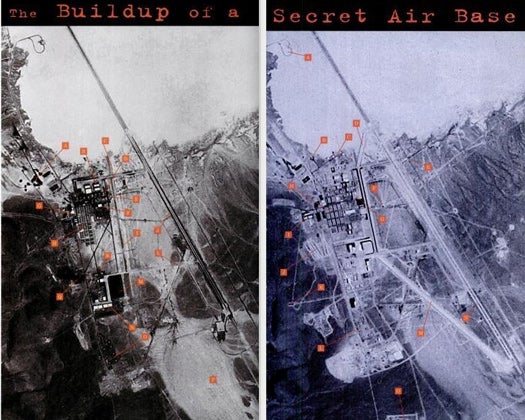 Our cover story in March 1994 asked whether or not the government was concealing a secret base in Groom Lake, Nevada, near Area 51. Although the government rarely acknowledges the airfield, conspiracy theories and contemporary lore maintain that the area is used for testing secret aircraft. One congressional source told us that the operations at Groom Lake were not part of an official U.S. Government program, but rather, were part of a “black” intelligence program involving foreign funds. We also reported a theory that the Air Force wanted to purchase land surrounding Groom Lake to keep trespassers away. To this day, the government remains tight-lipped about activity in the area. The U.S. Geological Survey acquired the image at far left in 1968 while the image to its right was taken by a Russian spy satellite in 1988. Make what you will about the new taxiways and changes to the runway that occurred between those two decades. Read more about what our reporter found during an Interception mission in “Searching for the Secrets of Groom Lake” 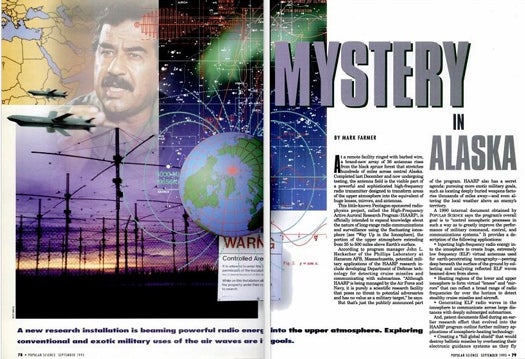 Officially, the High Frequency Active Auroral Research Program, or HAARP, is an ionospheric research program funded by the U.S> Air Force, U.S. Navy, DARPA, and the University of Alaska. In September 1995, however, we wrote that HAARP has “a secret agenda: pursuing more exotic military goals, such as locating deeply buried weapons factories thousands of miles away — and even altering the local weather above an enemy’s territory.” It may sound like the stuff of science fiction, but in 1990, we obtained internal documents stating that the program’s true purpose was to manipulate ionospheric processes for military and communications purposes. Supposed applications include heating areas of the ionosphere to form “lenses,” which would reflect radio frequencies to detect stealth missiles and aircraft. To many, HAARP’s purposes seem ephemeral, and therefore open to conspiracy; dissenters have suggested that its research has led to power outages and plane crashes, among other disasters. Read the full story in “Mystery in Alaska”
Military
Popsci Archive