In the microscope-aided photography competition, these embryos stand out 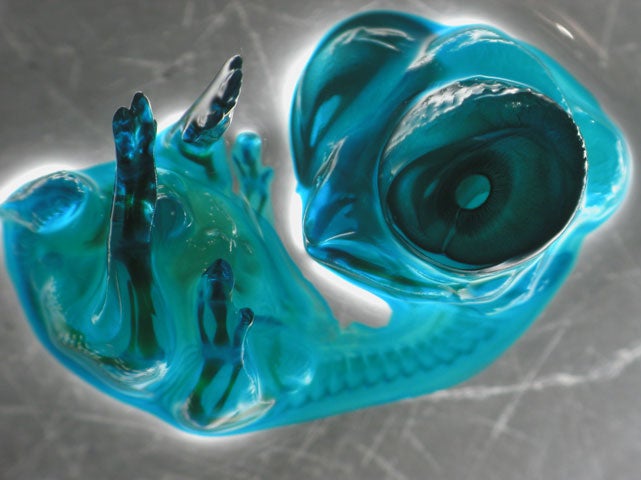 This shot of a nine-day-old chick embryo won first place in the popular vote on Nikon Small World's website. The New York Times's John Tierney thinks that's just because it's so dang cute, but I beg to differ: as ridiculously cool as it is, it looks something like a fruit snack-cum-monster. De Azevedo obtained this image by staining the embryo with green dye, immersing it in wintergreen oil, and photographing it with a stereomicroscope. Courtesy Nikon Small World Photo Micrography Competition; Photographed by Tomas Pais de Azevedo
SHARE

Nikon’s annual Small World Competition has been awarding prizes to the country’s best microscope-aided photography since 1977. The contest winners always present a reliably fascinating and freakish slice of life at a Lilliputian level. Last week, this year’s 115 winners were announced.

Since this is a column about reproduction—and since everyone loves to gaze upon an embryo every now and then—here’s a selection of the best of the unborn, ranging from the merely small to the seriously minuscule. 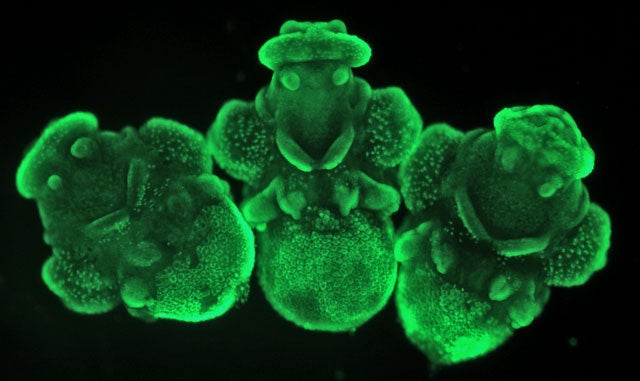 These adorable little creatures look like a trio of dapper dandies stuffed into acorns, but they’re actually mini-squids. The gestation period of squid eggs varies according to the temperature of the water in which they were laid (in warm climes, they can hatch in around 11 days; in colder waters, it can take up to 27). The embryos here are still young, but they’re already differentiated enough to have eyestalks and mouths, and you can just make out the budding tentacles. 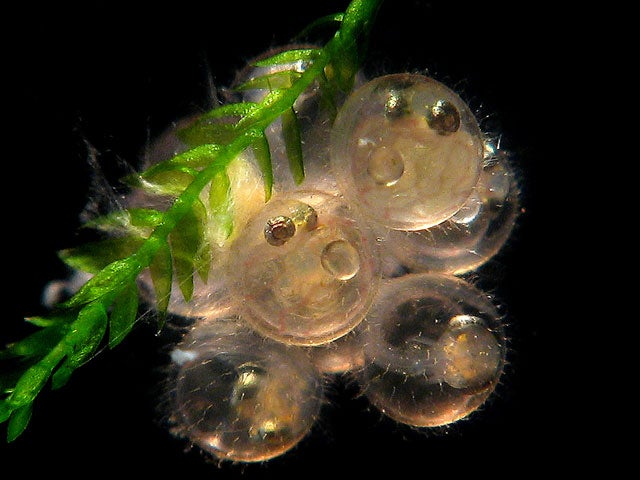 Here’s a fun fact about the Japanese rice fish: it was the first vertebrate to mate in outer space. On a 1994 mission of the Space Shuttle Columbia, four carefully selected rice fish, including a lusty young “playboy,” were placed in a sealed aquarium and left alone to do their thing (click here for a play-by-play). After some missteps—the playboy apparently struggled to keep his balance in zero-g and mistakenly executed “a circle dance of courtship” around another male—the proper rice fish finally managed to connect. A few days later, a fry of baby fish was hatched from fertilized eggs much like the ones pictured above. 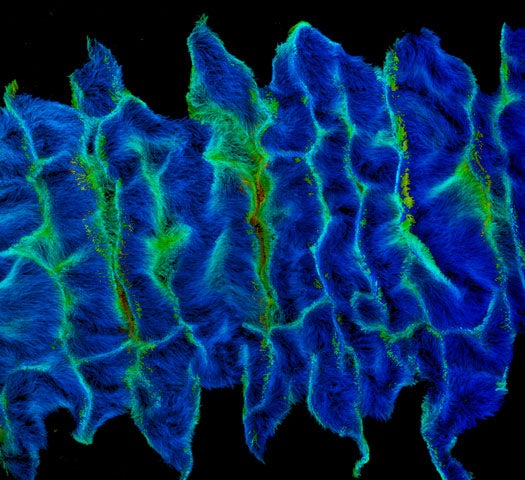 Here’s an extreme closeup of an embryonic earthworm’s developing band of cilia. Earthworms are hermaphroditic—they have both testes and ovaries and mate by swapping sperm. Afterwards, they each secrete a cocoon-forming mucus from their clitellum—the saddle-like protuberance bulging out of the top of their midsection—and deposit an egg-filled package into the ground. 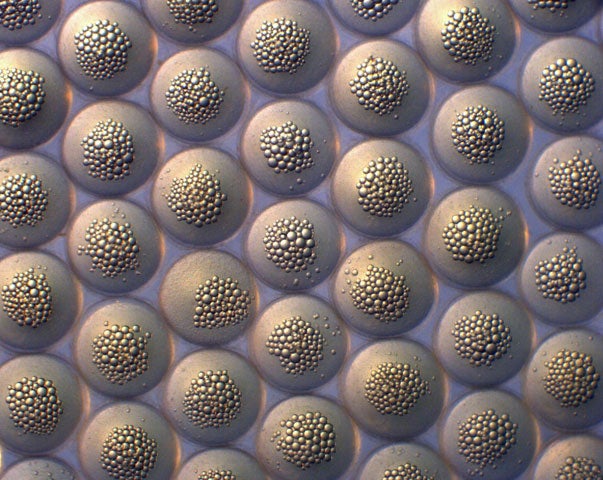 Adult killifish are small and mega-bright and hard to kill, which makes them popular pets (there’s even an International Killifish Association that caters to “killi” hobbyists worldwide). The species pictured here—known colloquially (and hilariously) as the mummichog—is a favorite of scientists because of its unusual breeding patterns. Up to eight times a year, female mummichogs will spurt out a passel of fertilized eggs onto empty mussel shells and shallow-water plants; the embryos like to develop in the open air. Once they get a little larger than the ones shown here, it’s possible to look right through the egg and see the fishlets’ beating hearts. 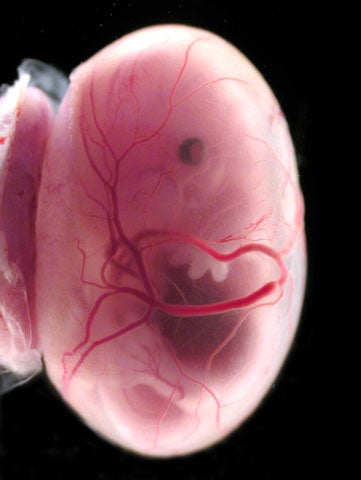 This 13-day-old embryo is a very very very fine mouse. Mice usually deliver their pups after just 19 days of gestation, so the youngster pictured here is not far from popping out of his mom and looking something like this. You can see a well-developed eye in the middle of this picture, as well as a tiny paw directly below the head and a faint hint of a tail at the bottom.

This shot of a nine-day-old chick embryo won first place in the popular vote on Nikon Small World’s website. The New York Times‘s John Tierney thinks that’s just because it’s so dang cute, but I beg to differ: as ridiculously cool as it is, it looks something like a fruit snack-cum-monster. De Azevedo obtained this image by staining the embryo with green dye, immersing it in wintergreen oil, and photographing it with a stereomicroscope. 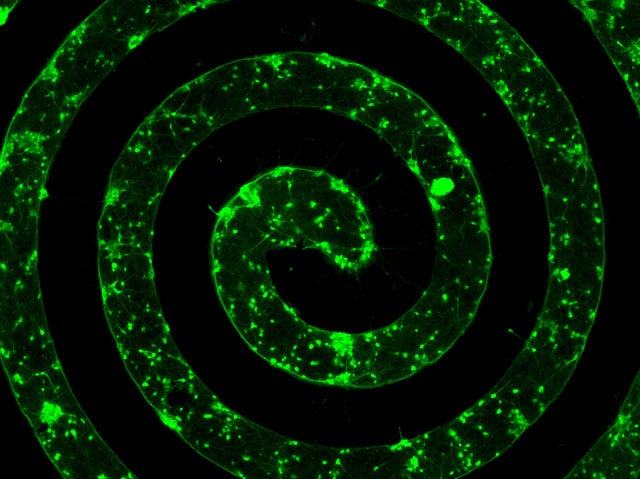 This kick-ass photo comes straight outta Compton. Kidding! It’s out of Wayne State’s cutting-edge Smart Sensors and Integrated Microsystems program. Scientists there have been refining a technique of “explanting” rat cortical neurons, removing them from the rodent and putting them on specially manufactured electrode arrays. There they take on a semi-life of their own; they can be coaxed to make connections with each other and produce the same kind of electrical activity that they might make inside an actual rat brain. 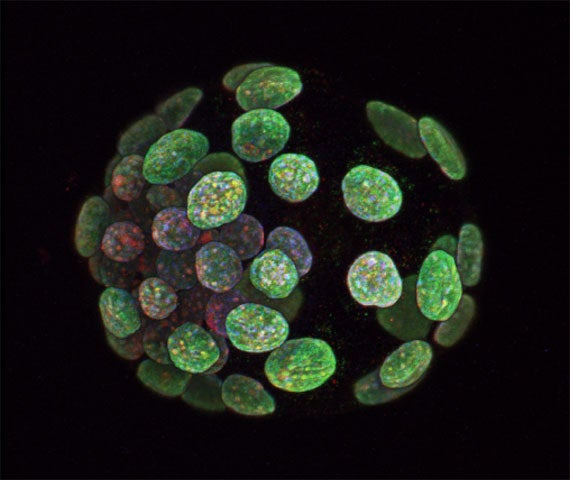 A blastocyst is an embryo so young that it hasn’t yet implanted into the uterine wall; it’s just a ball of undifferentiated cells. In both mice and humans, embryonic stem cells are extracted from the core of the blastocyst (the outer cells will eventually become placenta)—in fact, it was by experimenting on mouse embryos over 20 years ago that scientists figured out how to isolate stem cells in the first place.
embryos
Photography
sex
small world