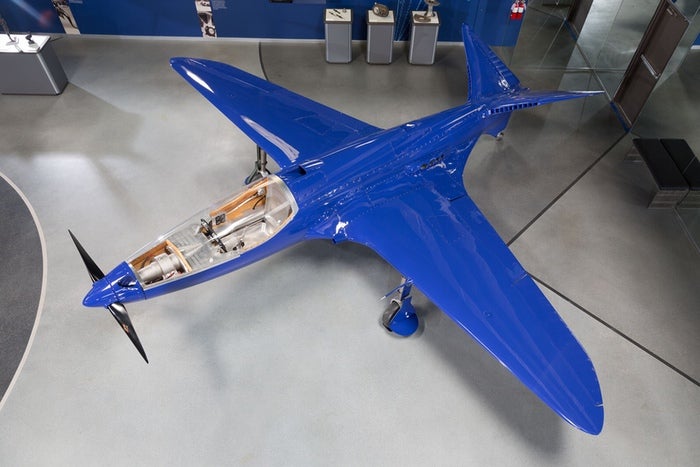 Consider it a technology tragedy of World War II. Designed in the 1930s by legendary carmaker Ettore Bugatti, the 100p Bugatti was a propeller-driven passenger plane that in theory boasted a speed of 500 mph. Abandoned as the war began, the incomplete plane was never flown. A Kickstarter project that closed in 2013 raised enough money to build a working reproduction of the plane, and take it to the sky. It’s dubbed the “Blue Dream,” and it looks like an alternate history of flight:

The plane features swept-forward wings, Y-shaped tail, and two contra-rotating propellers. The engines sit behind the pilot, who has a large glass cockpit right behind the propellers. Forward-swept wings mean improved handling at high speed, though it risks bending the wings upwards if they’re not made strong enough. Project creators state “Had it flown in the summer of 1940, it would be seen today as an historically-significant aircraft,” and given the rapid development of fighter aircraft in the early 1940s, it’s easy to imagine designers borrowing traits from a racing plane for their latest war machine. Crimson Skies, a videogame re-imagining of an alternate 1930s full of aerial warfare, features a fighter with wings swept-forward, though not as elegant as the Bugatti 100p.

The Bugatti 100p has successfully taxied, with an expectation of a flight soon. While it’s hard to imagine the plane having a worse record than its predecessor, the latest backers-only Kickstarter update is titled “First Flight Video Problems.” Here’s hoping that’s problems with the video, and not the flight itself.