Samsung Shows Off At IFA 2015 With Gear S2, SmartThings Hub, And More

All the biggest unveilings from the South Korean electronics giant Internationale Funkausstellung Berlin, or IFA for short, is the biggest tech trade show in Europe (not to mention one of the oldest). It’s a place where numerous leading tech companies come to show off their latest and greatest devices. IFA 2015, held this week, was no exception. But among the crowd of device-makers vying for the attention of gadget-heads and reporters, one company clearly stood head and shoulders above the rest: Samsung. The South Korean tech giant showed off new mobile devices, a new wearable, and a fleet of new connected devices in the Internet-of-Things category. Here’s what we got: 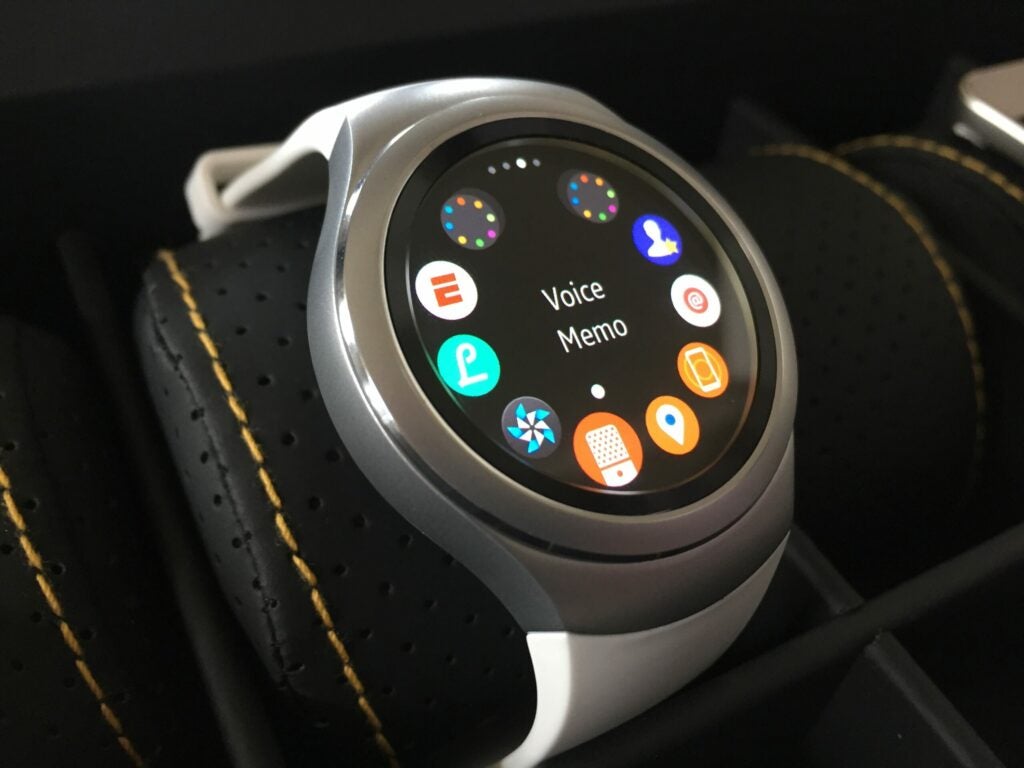 Hints of the round Samsung smartwatch could be seen leading up to IFA 2015, but now it’s finally arrived. The follow-up to last year’s Samsung Gear S has taken an entirely new form factor—opting for the round screen instead of rectangular. The Gear S2 will support Samsung phones as well as Android devices running Android 4.4 and above. But the operating system that powers the watch is still Samsung’s own Tizen, which means Android Wear fans are out of luck.

Along with the 1.2 inch circular screen with AMOLED display, other important specs include the 250mAh battery, IP68 certified dust and water resistance and NFC for Samsung Pay. Specs don’t vary between models, of which users get three: the Gear S2, Gear S2 Classic and the Gear S2 3G. The latter comes equipped with a cellular radio.

The Gear S2 sets itself apart from the competition and its predecessors in a few key ways. For one, the rotating bezel allows users to choose from menu items in addition to the touchscreen. The dial offers a more integrated solution than Apple’s digital crown. Like most smartwatches, the device makes use of inductive charging.

However, because it uses Samsung’s proprietary Tizen OS, it won’t work on the Apple iPhone or any iOS device. That means If you want to use Samsung’s latest and greatest smartwatch, you’ll have to be on Android. That limitation is especially pronounced in the wake of Google’s recent move to allow its own wearable OS — Android Wear — to work with iOS devices, meaning customers who have a Motorola smartwatch will be able to use it with an iPhone. The same can’t be said for the Gear S2, unfortunately.

Samsung is taking on Wink with the announcement of their SmartThings Hub. The South Korean phone maker acquired SmartThings last year for $200 million and has fleshed out the hub device for your connected home. SmartThings’ latest hub—which works with iOS and Android—can now continue to work for 10 hours even if power is lost due to a built-in battery. The SmartThings Hub also brings along a beefier CPU and doesn’t require the cloud to function.

As the SmartThings Hub trailer shows, users will be able to control lights and door locks from their phone. While away, users can unlock the door for guests or even be a fly on the wall as activity takes place within the home all when you’re away. The ability to have video recorded following specific events like the activating motion sensors or detection of smoke or fire. The sensors will run you an extra $30 to $55 on Amazon.

Not much is known regarding the View tablet

Much like a Marvel movie’s post-credits scene, Samsung concluded its IFA 2015 with a teaser for its next project. Not much was said about the Galaxy View, but a photo offered by Samsung tells us a lot. The tablet will likely be a large one, and ships with a kickstand. The company did tell fans to “think bigger” and mentioned “a new dimension of entertainment” in relation to the tablet. Perhaps the company is looking to release a touchscreen device meant for viewing entertainment.

Samsung didn’t just stop at the big announcements. Other products revealed at the Berlin tech show includes SleepSense: a sleep tracker that turns off your TV, lowers lights, adjusts the AC and more once it detects you’ve gone to bed. The WW8500 AddWash is a front-loading washing machine that allows you to add clothes even after a load begins. The two products didn’t make as big of a splash at IFA 2015 compared to the Gear S2 but in the case of the AddWash it seems that’s the point.