Gharial crocodile dads are pros at ferrying their kids across Indian rivers. 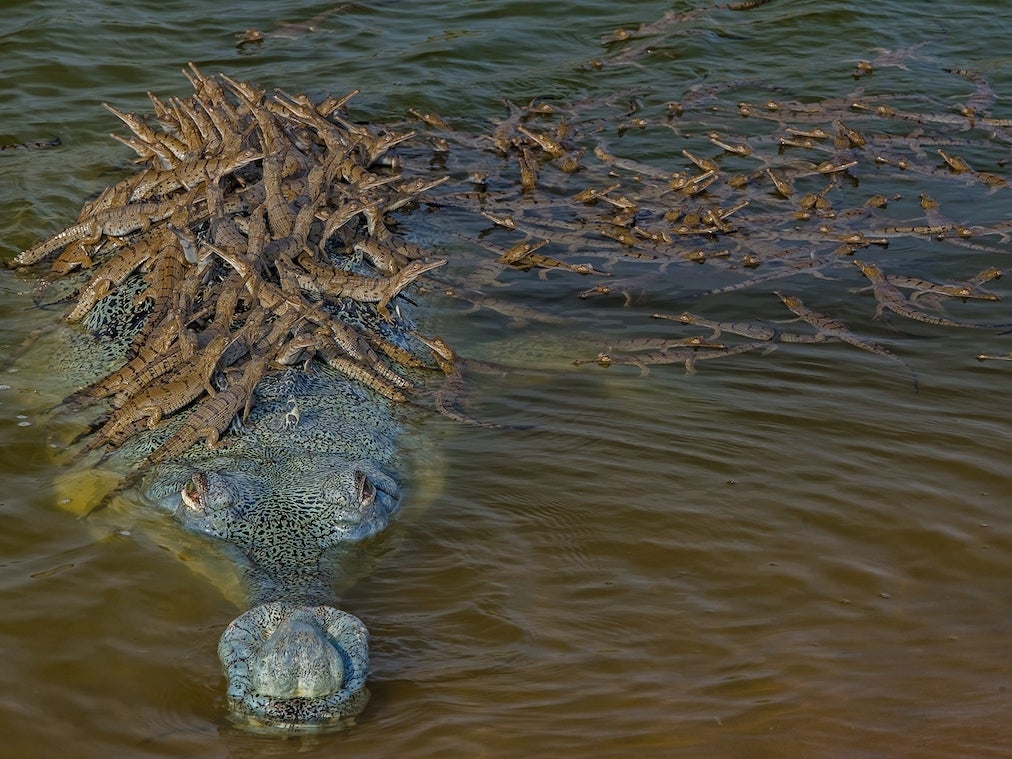 In Indian mythology, the goddess Ganga—the personification of the Ganges river—is often depicted riding a creature with the head of a gharial crocodile, a fish-eating beast that only exists in the Indian peninsula. Once distributed throughout nearly 31,000 square miles in four countries, the gharial is now a critically endangered species; photographer Dhritiman Mukherjee recently set out to capture some of the few remaining (and, one might say, sacred) gharials.

In June 2017, Mukherjee captured a male gharial carrying more than a hundred of his offspring on its back at the National Chambal Sanctuary in northern India. Last week, the Wildlife Photographer of the Year Award highly commended Mukherjee’s picture for the Amphibians and Reptiles category.

“I mostly work on endangered or rare species or threatened ecosystems which need our attention,” says Mukherjee in an email, who’s been photographing wildlife for over 20 years. “Here, I tried the same thing with a species which I feel really needs our support.”

He’s not wrong. In 2006, the gharial crocodile joined the IUCN’s list of critically endangered species. Dams disturbing the riverine ecosystems where it lives, riverbank mining, deforestation, unregulated hunting, and getting trapped in fishing nets reduced its population by 58 percent in just one generation (from 1997 to 2006), according to the IUCN. Thanks to efforts to save the species from extinction, there are approximately 650 adult gharials in the wild, a significant increase in comparison to the 182 individuals recorded in 2006. Yet the threats against them are not slowing down.

Mukherjee decided to visit the National Chambal Sanctuary to capture the fight for the survival of these crocodiles. The sanctuary is home to 77 percent of all the remaining animals.  Over four days, Mukherjee visited the river banks where mothers and fathers fight to ensure the survival of their offspring. “I was slow, I didn’t want to be another reason for their stress,” he says.

He spent the first two days near the bank of the Chambal river where the crocodiles gather, pretending not to notice them. Like other crocodiles, male gharials help their babies to move through rivers. But the peculiar long, thin shape of their snouts doesn’t allow them to transport their young on top of their noses as other crocs might do, said to the BBC Patrick Campbell, the senior curator of reptiles at the Natural History Museum. So, instead, they carry the little ones on their backs and heads.

When the animals finally stopped caring about his presence, he took out his cameras (a Nikon D4s and Nikon 70-200 with an F-2.8 IS VR lens) and carefully started shooting.  “My goal is to connect people emotionally or scientifically with the natural world with the help of my images,” the photographer says.