Initial focus is on metal fatigue in a fan blade in the jet’s number-two thruster. 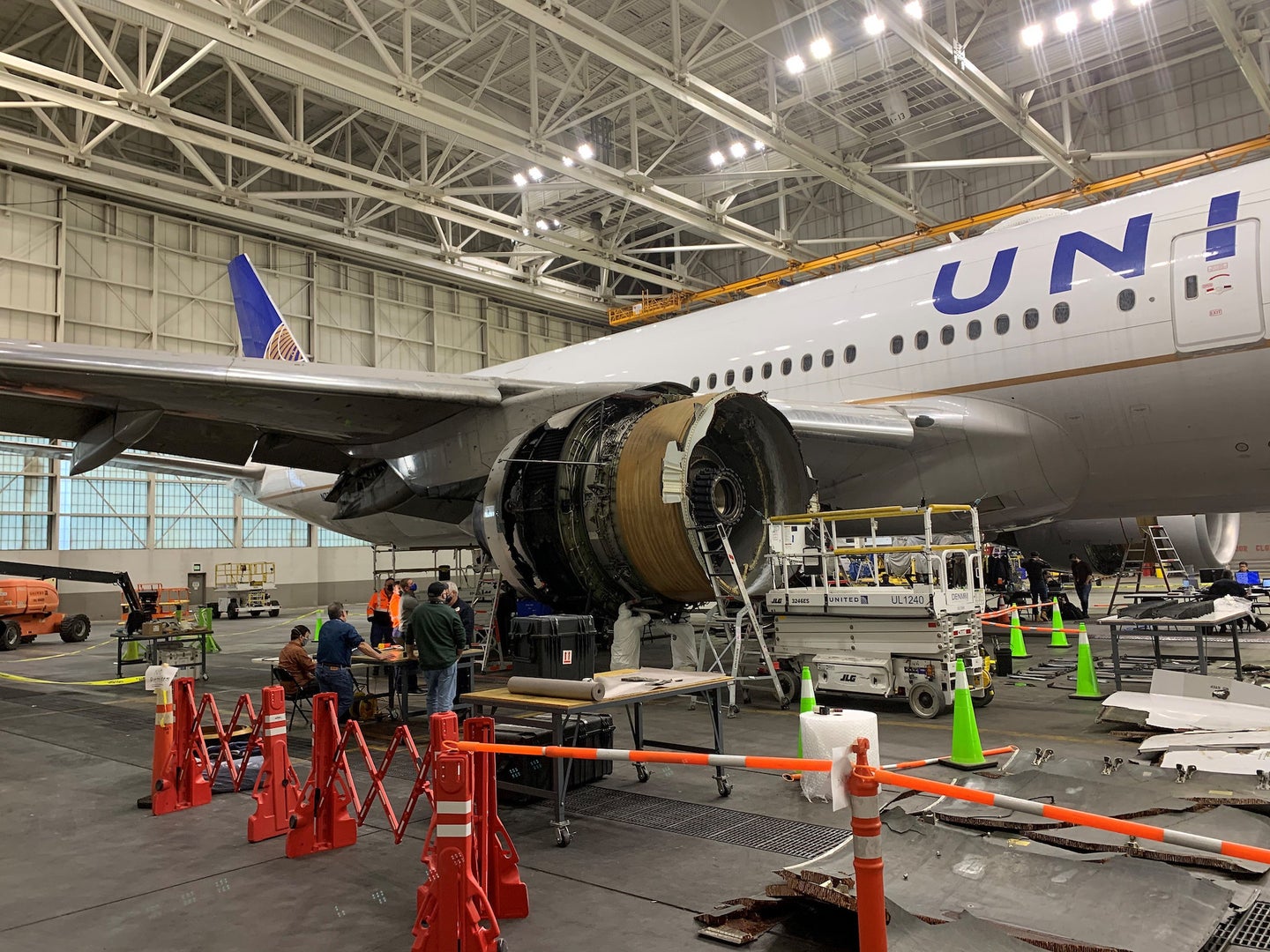 The aircraft, seen here with the engine damage visible on February 22, is a Boeing 777-200. NTSB
SHARE

On Saturday, February 20, a United Airlines flight lifted off from Denver International Airport, bound for Hawaii. Just minutes after departure, its number-two engine—the one on the right side—suffered a major failure.

Dramatic footage of the heavily damaged and flaming engine circulated on Twitter, as did images of engine pieces that landed in Broomfield, Colorado.

The aircraft touched down safely back at the same airport, and no one was hurt. While investigations into the event will stretch out months into the future, here’s what we know now about what occurred and what officials’ initial thoughts are.

A passenger on United 328 took this video of flames shooting out from the engine. Some people told me they said prayers and held their loved ones' hands as they looked out the window. Flight was on its way to Hawaii from Denver. Glad everyone onboard is safe #9News pic.twitter.com/c8TNYlugU2

What happened with United Airlines Flight 328?

“Approximately 4 minutes after takeoff, as the airplane was passing through about 12,500 feet above sea level, at an airspeed of about 280 knots [322 mph], a loud bang was heard on the cockpit voice recorder, and increased vibrations were recorded from the number-two engine,” Robert Sumwalt, the chairman of the NTSB, said during a media briefing on Monday, February 22.

The pilots made an emergency declaration to air traffic control, and then “the airplane did make a safe, single-engine landing, about 20 minutes after the engine failure,” Sumwalt added. That puts the entire flight time at about 24 minutes long.

Why do investigators think the engine failed?

The jet engines you see hanging under an airplane’s wings are called turbofans, and those fans at the front of the unit produce the thrust the airplane needs to get going fast enough to lift off the ground with all those people and suitcases and fuel on board.

The fans have fan blades. This engine, made by Pratt and Whitney, had 22 blades. (Another engine, the GE9X that will power the new 777x, sports only 16.)

In this case, it appears that one fan blade completely broke off from the hub to which it was attached. “Two fan blades were found fractured—one fan blade fractured at the root, which is where it joins into the hub, and the other adjacent blade was fractured at about mid-span,” Sumwalt said.

Officials discovered one blade “embedded in the engine containment ring,” Sumwalt said. A separate, littler piece ended up on a soccer field below.

“Regarding the fan blade that was fractured at the root: A preliminary, on-scene exam indicates damage consistent with metal fatigue,” he added.

The other blade, which broke in the middle, likely did so because of the impact of that first blade. “Basically, it probably got hit as the other piece was separating,” Sumwalt said.

In brief: the problem may have been catalyzed by a single fan blade breaking off, which then hit another blade.

Why do they think metal fatigue caused this problem?

In response to a question from journalist Tom Costello, Sumwalt explained that what can be gleaned visually suggests metal fatigue as the culprit. Interestingly, he compared it to what you might see on a beach as a result of the water’s motion after the water laps in and out on the sand.

“In metal fatigue, you’re usually going to find what I will describe as ‘beach marks,’” he said. They can be seen with your eye, but “each of those marks, once you put it under a scanning electron microscope, you can actually count the number of cycles since the initiation of that fatigue,” he added.

Expect the issue of blade’s metal fatigue to be an ongoing theme with this investigation.

Did the pilots do anything about the fire in the engine?

The evidence from the cockpit suggests that yes, the pilots took action. “The fire handle for the number-two engine had been activated, and … both fire bottles had been discharged,” Sumwalt said.

What is it like for a pilot to have to fly a commercial aircraft with an engine out?

It’s safe to assume that pilots would like the engines on their aircraft to function perfectly all the time, of course.

But being prepared for a failure like that is part of the job. “We train a lot with engines inoperative,” says John Cox, a retired commercial pilot and now the head of Safety Operating Systems. The first moments involve “getting over the initial shock—the startle of having that muffled explosion sound happen, and the airplane shaking.”

After you identify the engine with the problem, “you start pulling the power back on it, and then you start into the checklist—once you get that started, this is the same process that you’ve done numerous times in a simulator, so that makes it a lot easier to cope with,” he adds.

A solid pilot, he continues, “is adaptive.” The original plan was to fly to Hawaii, but a crisis like this involves a rapid change of course—in this case, to return to the original airport.

Should I worry about getting on a plane with these engines in the near future?

The Federal Aviation Administration’s administrator, Steve Dickson, said in a statement via Twitter that there would be a new focus on inspecting these engine types. The statement says that an Emergency Airworthiness Directive will mandate “immediate or stepped-up inspections of Boeing 777 airplanes equipped with certain Pratt & Whitney PW4000 engines. This will likely mean that some airplanes will be removed from service.”

The statement also referenced the “hollow fan blades that are unique to this model of engine, used solely on Boeing 777 airplanes.”

A statement from Boeing echoes those moves. The aircraft maker recommends “suspending operations of the 69 in-service and 59 in-storage 777s powered by Pratt & Whitney 4000-112 engines until the FAA identifies the appropriate inspection protocol.”

Is there any relevant history with these types of engines?

Yes. Two previous flights had similar problems—one with Japan Airlines last year, and another with United Airlines in 2018, as The Wall Street Journal explains.

Anything else to know?

In some ways, this is a frightening, worrisome incident that includes both bad news and good news.

“It’s a catastrophic event—they don’t happen very often; we do everything we can to make sure that they don’t happen,” Cox, the retired pilot, says. “I think there needs to be an equal focus on what went wrong here, but also what went right—the airplane tolerated the failure; the crew did a great job.”