Swimming with sensors to get the gold 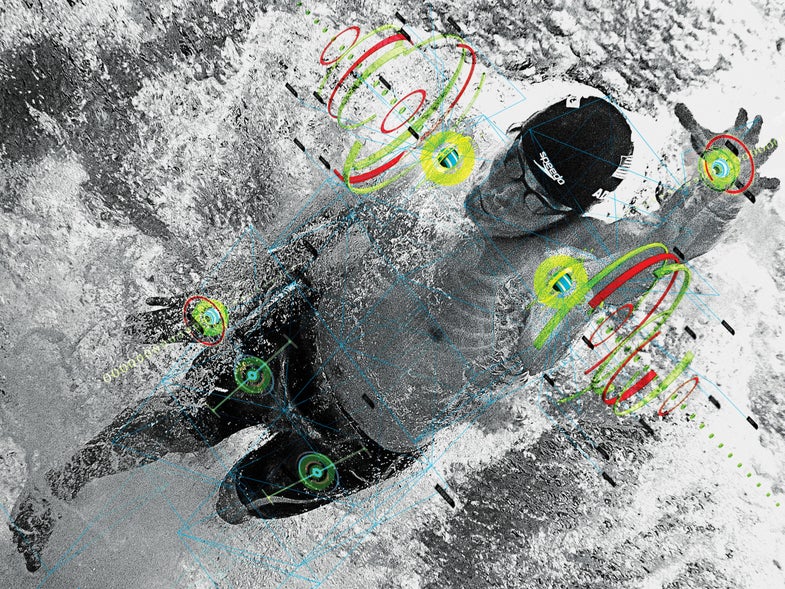 In swimming, form is just as crucial as force. Getting the smallest detail—even the angle of your ankle—just right is an obsession for the elite because it can mean the difference between podium and punching water. To help the pros, video analysis is now an indispensable training tool. “Before, we literally just used the coach’s eyeball,” to fix alignment, strokes, and kicks, says Nathan Adrian, a three-time gold medalist gunning for number four in Rio. “Now I strap LEDs on my body, and software does the analysis. The setup can be carried around in a suitcase.”

Engineers at BMW helped develop the portable technology exclusively for the U.S. National Swim Team. Instead of sensing a car drifting into your blind spot and helping to prevent a crash, BMW programmed the system to track the movements of a swimmer’s stroke with precision. Software then translates those movements—every thrust, stroke, or errant angle of the foot—into data.

Here’s how it works: Adrian sticks LEDs on his body, which are then picked up on high-speed video as he swims. Algorithms translate those movements into useful data coaches can then act on. Capturing and translating that data, says Peter Falt, director of creative consulting for BMW’s California-based Designworks, was “no small feat” for the engineers, designers, and programmers who built the system. It forced them, says Falt, to work in what were—to them at least—“harsh conditions” (e.g., underwater), and to track and analyze some very “fast-moving objects” (e.g., world-class swimmers).

One of the greatest 50- and 100-meter freestyle swimmers in the world, Adrian has competed in two previous Olympics and has watched the tech that most swimmers use, like slowed-down underwater video analysis­, become more precise. But BMW’s motion capture registers more nuanced movements. The system translates the data into 2D renderings that can be dissected down to the imperfect bend of a swimmer’s toes. That gives swimmers a level of feedback they never had.

The swim team uses these renderings specifically to assess and improve one of the sport’s most important moves: the dolphin kick—the first few undulating full-body motions a swimmer makes after diving in, or coming off the wall after a turn, and the moment of maximum underwater momentum. Getting more from that kick is key. “Focusing this technology on the dolphin kick was a milestone,” says Russell Mark, the team’s high- performance consultant. “It is a huge weapon. Everyone takes one or two kicks off the wall. But to be able to take seven, eight, even nine good kicks? That’s really using it.”

Now, when Adrian executes a perfect dolphin kick at practice, trainers can turn the data into a baseline to tell other swimmers how to replicate it. “We know who’s good at the technique,” Mark says. “It’s about figuring out how we can get more of our athletes to be like that.”

In early March, Adrian tweeted a short video of himself diving into the pool with the LED sensors stuck to his body. Though he’s ostensibly helping Mark beta-test the system, he’s capturing lots of useful information about his own technique, essentially gaining a great feedback loop.

“One of the things I’m able to see,” he says, “is the degrees’ difference of my spine line. I noticed the amount of movement I had through my upper chest compared with guys who were consistently beating me. It’s made a marginal improvement. But marginal is exactly what we’re looking for at this point. This is going to be huge in understanding how we maintain momentum.”

Eventually the team hopes to feed video analysis to a poolside tablet in real time, letting coaches make micro adjustments to an athlete’s form on the spot. But Adrian isn’t waiting for the finished product to get a leg up.

“I like to analyze, I like to understand why things work,” he says. “I had never before looked at my dolphin kick with that type of granular analysis. In swimming, if you can make yourself more efficient without expending more energy, that’s free money.”