It helps to know the road before you go 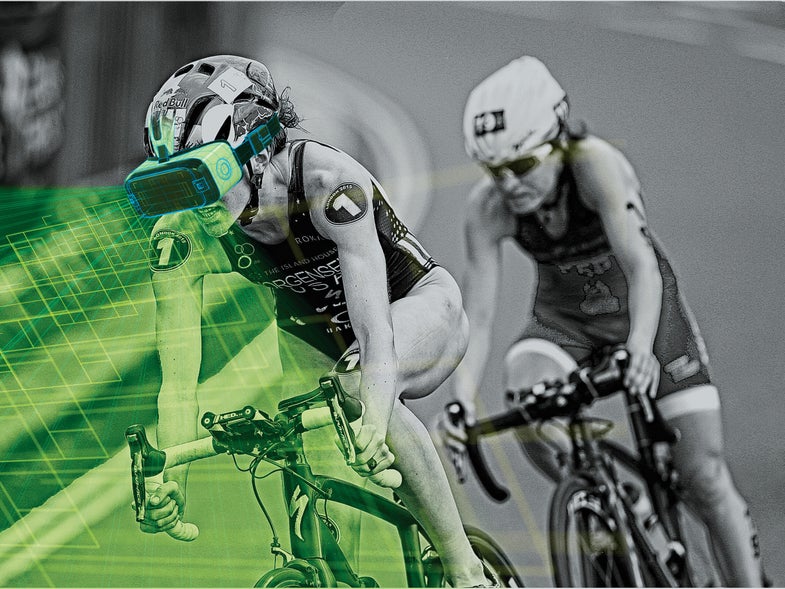 Gwen Jorgensen’s secret training tool isn’t her $10,000 road bike—it’s her mind. As in when she kicks back and closes her eyes. “I use mental visualization to prepare for races,” says Jorgensen, who at 30 is a two-time world-champion triathlete. The trend in visualization training has taken hold in the top ranks of elite athletes. So Jorgensen spent this summer concentrating, via virtual reality, on the rutty streets of Rio’s Copacabana neighborhood. “Rio is a very tough bike course,” she says. “There are big hills, and there’s a technical descent that will be a major factor.”

Jorgensen’s sport is among the most grueling on the planet, covering swimming (.93 miles), running (6.2 miles), and cycling (24.9 miles). To perfect her form, her trainers brought in virtual-reality pioneer Joe Chen. He is a former product lead at Oculus, and now at Vrse.works, the production house that makes VR movies and VR content for big media companies. Chen flew to Brazil and attached a bunch of GoPros to the hood of a car, matching it to the eye height of a cyclist. “Then we just drove the course,” capturing it in 360 degrees, he says. He then converted the entire thing to an MPEG viewable on a Samsung Gear VR headset. Jorgensen now uses it to follow the entire bike route, or to play short clips of isolated sections that she can study in detail. In other words, Rio came to her.

And it’s a 24/7 companion. “Wherever I am traveling in the world,” says Jorgensen, “I can put on the goggles and look at this course—look left, look behind me, look right—and see every little nuance.”

Training with VR, it turns out, is in some ways even better than a real test ride. “It’s completely different than memory,” she says, “which often fails me.”

Jorgensen is relatively new to the triathlon, and to cycling in particular. A former CPA, she had been a longtime runner and swimmer when she decided six years ago to add cycling to her skill set. Two years after going pro, she qualified for the 2012 Olympics. But during the London games, she blew a tire, finishing 38th. She has since bounced back, winning more consecutive races than any female triathlete in history. Now she is considered the most dominant female in the sport—even though she has yet to medal. She hopes Chen’s VR training finally helps put her on that podium. “It’s so hard to explain how real it is,” she says. ”It’s not something I’ve ever experienced before.”

The goal of VR training is not merely to learn the course, though that helps; it’s to gain an almost muscle-memory knowledge of the terrain and its challenges, and to game out your responses. “I still have a pretty steep learning curve on the bike,” says Jorgensen. “This VR stuff is about confidence building—preparing myself so I have as many tools as possible, mitigating anything that could potentially happen on race day.”

Jorgensen’s body language changes when she wears the goggles. You can see her figuring things out, says Chen, who observed her the first time she tested them. “All of a sudden, she was into this technical section and realized she could look through corners,” he says. “Her body took over as she leaned and craned her neck. These become strategy sessions for figuring out where you hammer down or lay back a bit if the risk is not worth the reward.”

There is, however, one thing lacking in the VR-training experience that Chen built—the ability to speed up or slow down. That’s why Jorgensen can use it only in visualization sessions, not sitting atop and pedaling a stationary training bike. Chen thinks it won’t be long, though, before cyclists are using the visualization functionality combined with a whole lot more.

“As an industry, we hope to start creating simulations that challenge not only the visual systems, but also the physical systems—even the balance of the inner ear,” he says. “We want to be able to put you on a bike and simulate G-forces. Or allow you to try different lines through a corner to see which is fastest. But we’re not quite there yet—and the last thing we want to do is a science project on a successful athlete.”

Once the technology scales up, Chen sees other training possibilities. It could, for instance, be useful to racecar drivers when they can’t execute an actual practice lap. (It also costs a lot of money every time a driver takes the wheel of a professional car.) “Formula 1 drivers spend a lot of time in these very complex multimillion-dollar simulators,” Chen says. “While VR is no substitute for driving an actual course, it will help familiarize drivers with the track. It’s a head start.”

The cycling section of this year’s triathlon is sure to add some classic Olympic drama, but Chen believes Jorgensen can triumph, almost as if she were back home and merely visualizing it. “For Gwen,” he says, “we want riding this course to be like getting up in the middle of the night to get a glass of water from her kitchen.