One of them promises “unlimited” time between charges—if you manage it the right way. 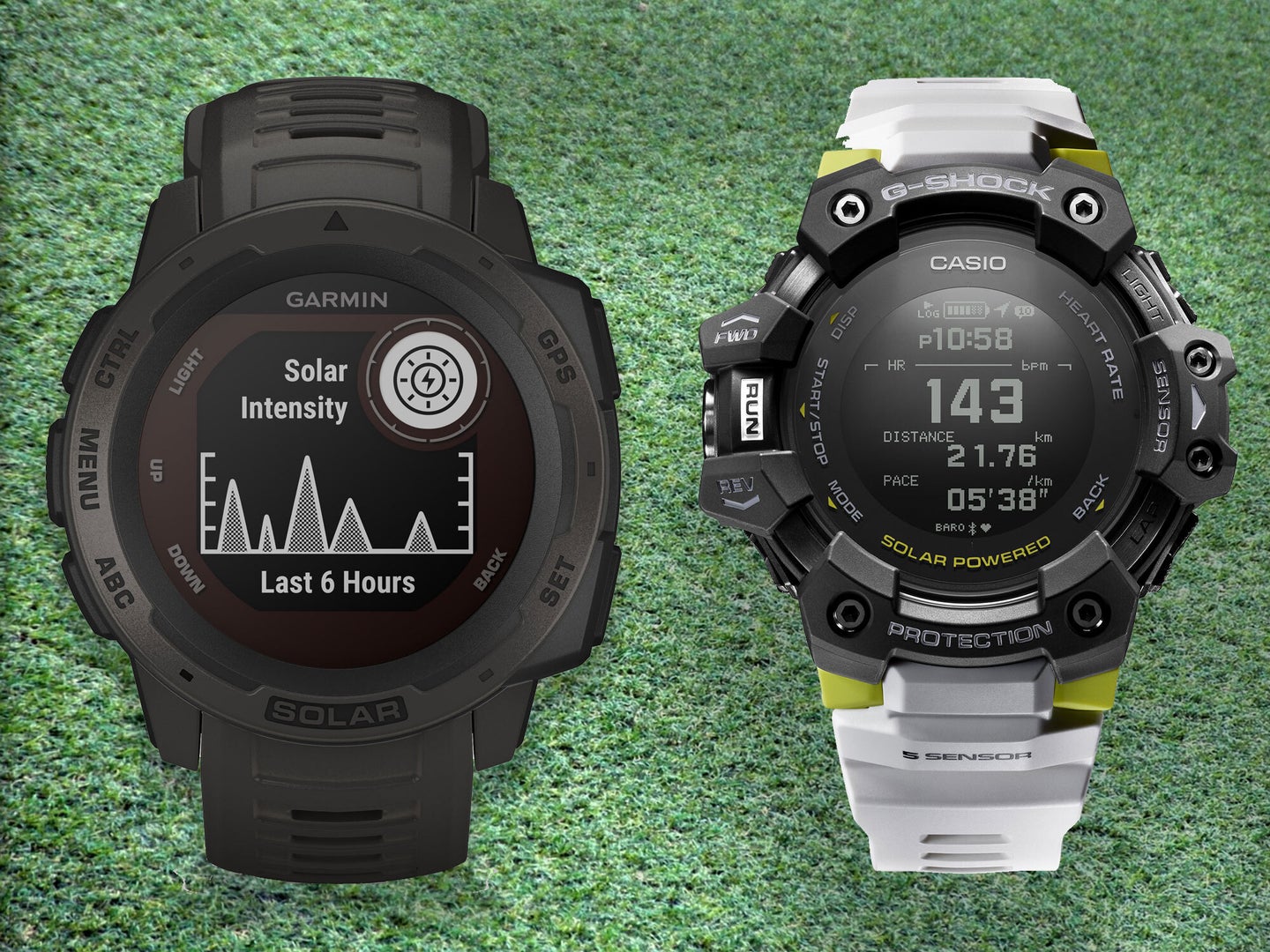 These Garmin and G-Shock timepieces will track your workouts and get a boost from the sun, too. Garmin / G-Shock / Stan Horaczek
SHARE

Battery life is a crucial metric for smartwatches. The ubiquitous Apple Watch boasts about 18 hours of energy between charges, although the company is likely announcing new models tomorrow. But, it’s not just the size of the battery that determines its life—power from the sun can help extend it, too.

There are plenty of options out there for those who want a watch with fitness features such as step and workout monitoring, but don’t necessarily need a touchscreen device that can pull off tricks like making a phone call.

I’ve been testing out a pair of $399 solar-boosted smartwatches for some of the summer, and each of them have batteries that last weeks, not hours. Here’s how they stack up.

The Kansas-based company debuted new solar-powered watches this summer, and one of them, the Solar Instinct, can actually run for an “unlimited” amount of time if it gets enough sunlight. It harvests solar energy through both its display and a photovoltaic ring around it, but to take advantage of that allegedly perpetual power, you need to put the watch into “battery saver” mode, in which it shows just the time, date, and number of days of battery life remaining. So, if you’re stranded on a desert island, it will tick away the days, but don’t expect it to track your workouts. Sorry, Wilson, the volleyball game will need to wait.

When I switch it into that battery saver mode after a full charge, it shows that it can go for 56 days—it would need more solar exposure to persist longer. I’ve typically left mine in the main “smartwatch mode,” in which it says it can last some 24 days.

This isn’t Garmin’s first solar-powered timepiece. That was the 2019 Fenix 6x Pro Solar Edition, a huge multi-sport watch that starts at more than $1,100 and would probably fit nicely on Arnold Schwarzenegger’s wrist. Other watches in their Fenix 6 line also now incorporate solar charging, but those are north of $800. The Solar Instinct clocks in at a much more reasonable price—$400—and is lighter than those Fenix 6 watches, and smaller than most of them, too. It feels much more appropriate on my wrist than the enormous 6x.

The Solar Instinct’s display is a strange shape: It’s roughly an inch-by-inch square with three chopped-off corners and a separate round cutout in the upper right. That circular complication can display different information, such as the number of steps you’ve taken, the date, or your heart rate. One of the aspects that makes this watch “smart” is that it can display notification from your smartphone on its non-touchscreen display, but with watches like these I prefer to turn that function off (although that’s a matter of personal taste).

Ultimately, the watch feels tidy, efficient, and practical. I’ve enjoyed using it to monitor walks and track two hikes in New England. One of its best features is a graph that shows how much solar energy it has soaked up recently.

The G-Shock line of watches is known for its military-esque vibe and thick, beefy build. (Although they can be playfully retro and colorful, too.) A new timepiece—called the GBDH1000, it launched this spring—is the first in the G-Shock line to sport a heart rate monitor and GPS tracking, and it communicates with a new app, called G-Shock Move. Like the Instinct, it costs $399. It’s one of two models in the brand’s Move category.

Also like the Solar Instinct, the GBDH1000 can get an energy boost from the sun, and the company says that the watch’s power can last an entire year if it’s used just as a timekeeper. (You’ll need to plug each timepiece in with its USB cord to give it a full charge, though. And with both of these watches, the more you use them to track workouts using GPS, the less time you’ll get from the battery.)

Both the Garmin and the G-Shock feature a colorless display, and this Move model’s is a small circle about an inch across. Its case, though, is huge—about 2 inches across horizontally and vertically, making it another good watch for Arnold.

If you grew up wearing simple Casio digital watches, this timepiece will be a nostalgic reminder, since Casio makes the G-Shock line; hit the Mode button on the lower left side of the Move to cycle through screens that show your heart rate, a stopwatch, a digital compass, and more. Tapping the display button on the top left cycles through different home screens, including one that shows a graph of how many steps you’ve taken each day that week.

While the Instinct is a multi-sport watch—you can select activities like walking, running, swimming, or kayaking—the Move is simpler and more geared towards runners. Just push the big button on the left that says RUN to start tracking a workout. I’m no runner, so I used both the Move and the Instinct to track walks.

During a workout, the Move’s screen displays metrics like the distance you’ve traveled and your heart rate. With the Move app, you can customize what bits of data appear where; it’ll also tell you more information, such as your average heart rate or your pace.

The big appeal of a watch like the GBDH1000 is its simplicity and toughness, and athletes and others who like the vibe of the G-Shock line may enjoy it. But both the watch and the app feel less mature and less refined than the Garmin and its corresponding app, and I have concerns about its heart-rate accuracy following my anecdotal testing. On several walks, I wore the Move on one wrist and an Apple Watch on the other, and for most of those recent tests, the Move model suggested my heart rate—both the average and the max—was noticeably higher than the Apple device did. (Another reviewer has noticed something similar.) It can also feel sluggish when trying to grab a GPS signal at the beginning of a workout and then saving or deleting the workout at the end: You’ll see a big “PLEASE WAIT” notice at that point.

I did the same testing with the Garmin and the Apple Watch, and in four recent walks, the two devices’ estimates for both average and max heart rate matched up well.

If you’re trying to decide between the two timepieces—you want to spend around $400 on a non-Apple Watch that will track fitness and receive smartphone notifications—my recommendation is the Garmin, although there are certainly more options out there than just these two companies.

G-Shock does make another Move option, though, and it’s just $150. Its coin-style battery should last some two years, and it can track steps, but lacks a heart rate monitor, among other features.