The Garmin Forerunner 945 LTE doesn’t require a phone to keep you on track, or to help if things go sideways. 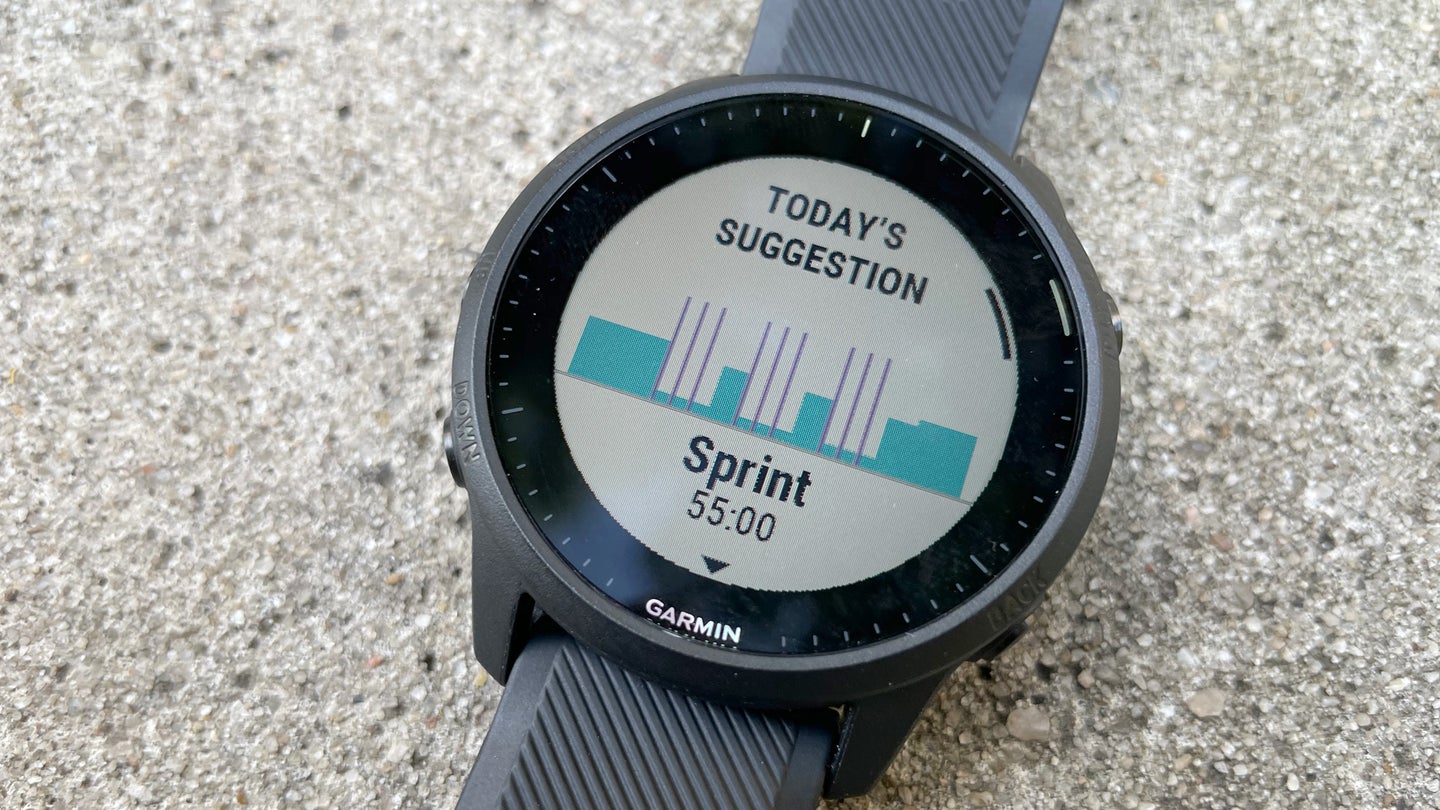 The screen has plenty of room for information. Brian Stillman
SHARE

Smartphones are annoying to tote along on a run, but they can come in very handy. A friend of mine once had a medical emergency while jogging and was able to call 911. My wife sometimes receives uncomfortable attention from strangers while training for races, so she likes the reassurance that comes from being able to call me or a friend if she ever feels unsafe. But both have told me that, all things being equal, they don’t enjoy strapping a phone to an arm or finding a way to secure one in small pockets. That’s where the new Garmin Forerunner 945 LTE sports watch comes in. As its name suggests, the company built LTE technology into one of its popular fitness tracker watches, the Forerunner 945 first released in 2019, so that it now provides powerful safety alerts in addition to advanced athletics tracking in a sophisticated $649.99 wearable.

However, the Garmin Forerunner 945 LTE can’t break fully from a connected device. You’ll still need your smartphone if you want to stream music from Spotify, get and respond to text messages, make calls, or receive Twitter updates or photos, etc. Replacing your phone isn’t Garmin’s goal. Instead, the company has packed an already feature-rich running watch with a number of reassuring wireless tools. So read on to find out if the latest iteration of the Forerunner 945—and the added cost of its LTE—are right for you.

This Forerunner is a surprisingly classy athletic watch. It’s not as chunky as the company’s Instinct Solar [check out our hands-on review]. And, while nowhere near as sleek as the Venu 2 [see our thoughts on that model], the understated design looked good when I met some coworkers for dinner. At 44.4 mm in diameter, 13.9 mm thick, and only 49 grams, it’s comfortable, too. Like many of Garmin’s sports watches, the Forerunner dons a familiar array of five control buttons, which I had no problem finding by touch while working out.

The watch’s lens is made from strong Corning Gorilla Glass DX (similar to the material used on various smartphones) and it’s set into a fiber-reinforced polymer bezel. This watch can take some abuse. The included silicone watchband feels fine, but it traps sweat and I’d prefer something that breathes more. Thankfully, Garmin and third-party providers offer dozens of replacement bands. Finding the right look and feel requires only a quick Internet search.

The bright, color display provides ample information at a glance, and it’s easy to read in full sunlight. Backlighting helps when it gets darker. Garmin preloaded the Forerunner 945 LTE with a number of watch face options. You can download more from the GarminConnect store or third parties. From there, it’s easy to tweak what information is displayed and how it’s laid out. You can also adjust the colors. Personally, I prefer a simple watch face with the time and date. I included message alerts for a while, but I get so many during the day that I can’t keep up, and seeing an icon with the number 75 next to it was just embarrassing. Three clicks of a button and, unlike all those unanswered message alerts, it was gone.

Setting up the Garmin Forerunner 945 LTE

My watch arrived 92-percent charged out of the box. I still topped it off by plugging it into a USB power source (you’ll need to supply your own adapter). In typical Garmin fashion, it charges via a proprietary multipin cable. Some companies, like Apple, have opted for wireless magnetic charging, but using a cable is definitely faster.

Garmin reports that the battery lasts up to two weeks in smartwatch mode and up to seven hours in GPS mode with music and LTE LiveTrack activated. In my tests, I was able to go a little more than 13 days before the watch died on me. However, in GPS mode, it did last the reported seven hours, though not much more.

Once charged, the watch guided me through its setup using helpful prompts that started by linking to my phone through Bluetooth to take advantage of the downloadable Garmin Connect app (available for both iOS and Android). From there, I established my baseline for health tracking, including weight, height, and sleep patterns, as well as other biometrics. I was also able to link the watch’s Spotify app to my account in order to stream music through my device or play music I downloaded to the Garmin Forerunner 945 LTE itself. The app then provided a quick-start guide to the watch’s top-level navigation and functions. You can also activate some of the community features, like challenges.

This is also where you set up your LTE plan. I was thrilled to discover I didn’t need to contact my cellphone service provider to activate a second line. In fact, you don’t need to sign up for a plan with any of the phone providers. The watch uses Garmin’s own cellular service. You’ll have to pay $5.99 per month with an annual subscription ($6.99 a month without). You’ll have to decide for yourself whether that fits your budget, but I found the price more than reasonable for what this watch provides.

I was excited by the prospect of the Forerunner’s new LTE connectivity. I dreamed of owning Dick Tracy’s communicator watch when I was a kid, so the lure of having a wearable that wasn’t tethered to my iPhone was impossible to ignore. But that’s not exactly what Garmin had in mind when they designed this sports watch.

The Garmin Forerunner 945 LTE, which costs $50 more than the base model, uses its over-the-air functionality to add helpful tracking features for both performance metrics and well-being, such as real-time progress sharing, crash detection, and emergency response team assistance request.

The Assistance tool is the one you hope you never have to use. It sends a message to your emergency contacts if you’re feeling unsafe or you’re lost, and it includes location data so they can find you. Assistance Plus takes this a step further by sending your name and location to the Garmin IERCC, which is a professional emergency response coordination center that then contacts emergency services to get you out of trouble. This is the same technology Garmin uses on its navigation tools to help rescue people at sea, when mountain climbing, and in other extreme situations. For extreme runners, backcountry skiers, wilderness hikers, people who like to swim in the open ocean, this safety tool is a no-brainer.

Taking it for a test run

I tested out LiveTrack, a tool that lets friends and family follow your location in real-time, on a jog through my new neighborhood. My friend, back in his apartment, followed my route without any trouble through an invite-only web portal. Of course, it also showed him how long I chilled out in the park halfway through my run. The tool was accurate enough that he could even figure out which bench I sat on. Busted!

Spectator Messaging is a fun tool that lets friends, family, coaches, or teammates add some extra motivation during a race by delivering audio and text messages.

Finally, Live Event Sharing automatically sends race updates to your friends so they can stay up-to-date on your pace, location, and time. No need to press a button or do anything else that might break your concentration or interrupt your stride.

The Garmin Forerunner 945 LTE puts a lot of information on your wrist, but the lack of touchscreen technology means navigating what to me often felt like a maze of submenus. Expect a learning curve.

That said, hot-buttons take you to convenient widgets that provide snapshots of such biometric data as heart rate, step count, run details, and pulse ox. Some widgets report the weather, provide calendar alerts, notifications, and similar information. This is just surface-level information; dive deeper via the watch or the Garmin Connect app.

Thankfully, dedicated buttons access the music player and stopwatch, two features that I hate hunting for in the middle of a workout.

While navigating the watch is sometimes trickier than I’d like, Garmin does an excellent job of conveying information clearly and concisely through the smart use of icons, colors, and easy-to-read text. I only needed to glance at my wrist to read my lap time and heart rate.

Keep track of your movement and activities

The Garmin Forerunner 945 LTE tracks all sorts of preloaded activities—like biking, paddling, hiking, walking, snowboarding, and rafting. You can easily add new ones. With its focus on running, it’s no surprise this GPS fitness watch provides different running options, including outdoor, indoor track, and trail. You can also get real-time feedback on your form, including cadence, vertical oscillation, ground contact time, stride length, and more by pairing it with a running dynamics accessory.

The watch suggests times for heat and altitude acclimation, lactate threshold, predicted race times, and training load and focus. It even provides daily suggested workouts. It tracks sleep data and then combines it with other information to help compute body battery, a measurement of energy levels. This, in turn, cycles back into the data set that helps the watch set up workout plans.

Garmin has a long history of making excellent navigation tools, and the Forerunner 945 LTE includes full-color mapping of streets and trails, plus you can create your own courses in the Garmin Connect app. ClimbPro ascent planner displays real-time information including gradient, distance, and elevation gain. The Garmin Forerunner 945 LTE also includes turn-by-turn navigation and round-trip routing.

Pay as you play

I like to keep my wallet secured in my locker when working out at the gym. The Garmin Pay feature lets me use my watch to pay for things like juice or a light snack in the same way that I might use my phone and Apple Pay. Just add a credit or debit card to the Garmin Pay wallet and you’re all set. It’s also handy for anyone who worries about losing their credit cards when running, or who spends a lot of time in the water. No one likes a wad of soggy cash.

So, who should buy the Garmin Forerunner 945 LTE?

The Garmin Forerunner 945 LTE is an upgrade to the original Forerunner 945, but it’s not an upgrade everyone needs. It provides peace of mind and fun features for fitness trackers, especially racers, but if you spend most of your workout time in the gym or running on a local track or in a safe neighborhood, you could save some money by considering running watches like the original Forerunner 945 or the Instinct line. They cost less but have nearly the same tracking, measurement, and training capabilities.