This new workout watch can tell when you switch activities

I did the world’s laziest triathlon to test out a hard-working wearable. 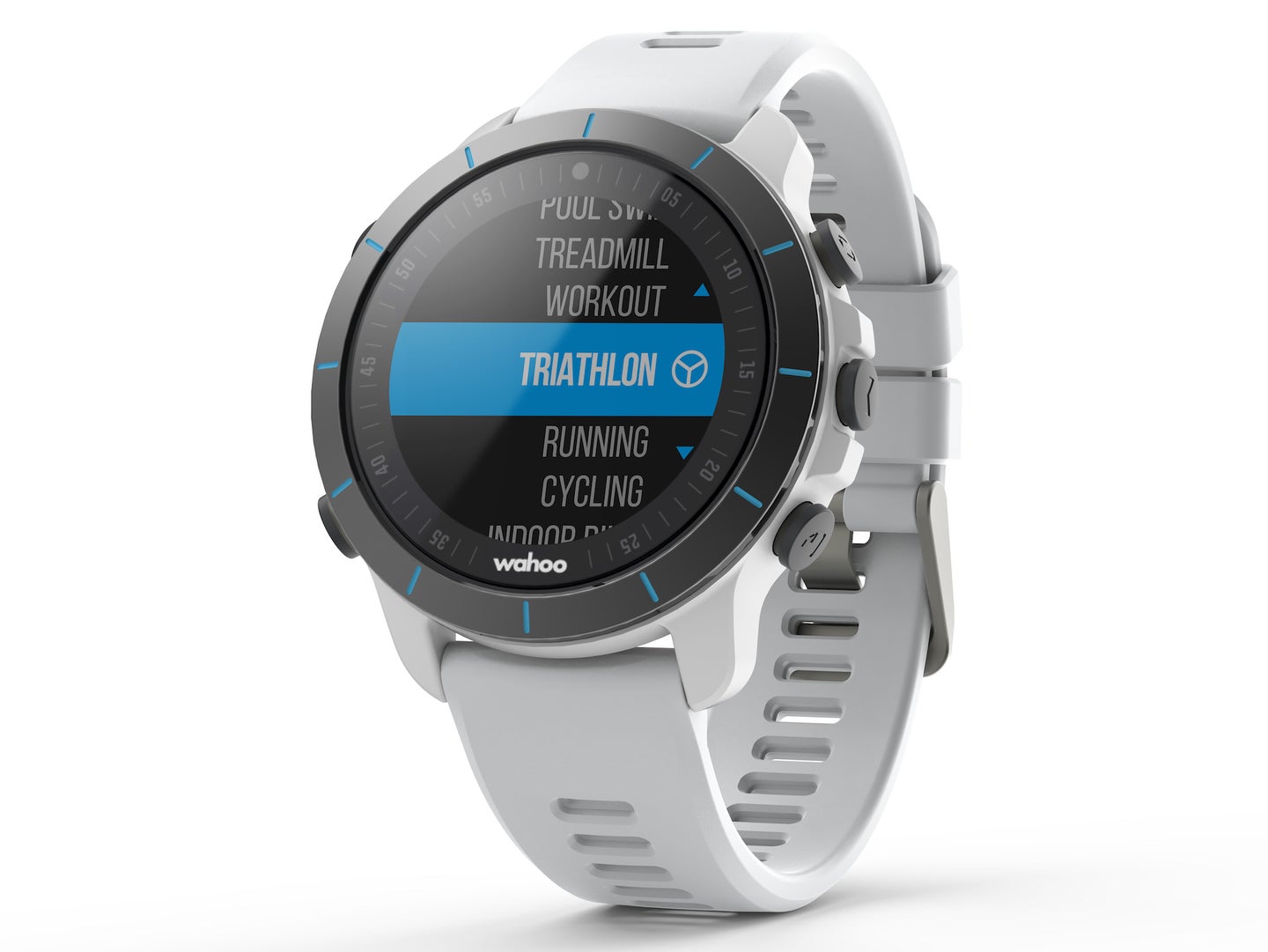 As the name implies, a triathlon is made up of three activities: swimming, biking, and running. But to test out a slick new sports watch from Wahoo that focuses on triathlon tracking, I faced a few key challenges.

The first is that I live in Manhattan, where there’s no open water available for swimming unless you want to don a wetsuit, hold your breath, and jump in the not-so-clean Hudson. The next is that I’m definitely not a runner. Another more general issue is that I’m certainly no athlete. But I didn’t let those limitations stop me.

All of that is why, on a recent Saturday, I started dipping my hand in and out of a small trash can that I’d filled up with water and positioned by a window in my fifth-floor apartment. That was meant to be the world’s weirdest, laziest simulation of an open water swim ever, just the first leg of my fake triathlon.

After dunking my hand in and out of that water for five minutes, I grabbed my bike helmet, left my apartment, and walked to a nearby Citi Bike docking station, where I rented a blue step-through cycle for $3.27 and started pedaling south. I covered less than one mile at an average speed of 4.9 miles per hour, and then returned the bike at a station on 110th street. From there, I started speed walking (my answer to running) back to my apartment, traveling a distance of .76 miles, according to the watch. It was a brisk, blue-sky day in Manhattan, and the mini-adventure left me invigorated.

All of this weirdness was in the spirit of checking out the wearable on my wrist. The Wahoo Elemnt Rival boasts a neat feature for tracking triathlons that it calls “touchless transitions”—after you put it in triathlon mode and hit start, it figures out what activity you’re doing without you needing to interact with the timepiece. This means one less thing to worry about in the heat of competition, so you can just focus on the athletics at hand. This is the company’s first sports watch; Wahoo is known for gear like its Kickr indoor training bike and its Elemnt bicycle computers.

So how did it do? It performed as well as could be expected while tracking my strange triathlon, and as promised, I didn’t need to tell it what activity I was doing during the workout.

It measured my bucket-based “swimming” as lasting for 5 minutes and 5 seconds, and thought that I’d traveled 21 yards. I should note that the watch is designed to be used outdoors for an actual open water swim, and a bucket test is certainly not the official way that it’s intended to be employed. But, part of the way the watch knows you’re swimming is by using the onboard barometer to notice the pressure differences between being underwater and not, and that’s why my bucket experience partly simulated a swim. But for it to really work properly, you need to swim outdoors, where it can also grab a GPS signal. The watch also isn’t designed to work for an indoor pool swim in triathlon mode.

All together, the watch uses its sensors—the barometer, accelerometer, and GPS—to figure out what activity you’re doing. Your motion and speed while biking, for example, will be different from swimming or running, and the timepiece’s algorithm works in the background to figure out what you’re doing as well as notice the two transitions between the three activities. (This is a slightly different feature from what you might discover on an Apple Watch: it auto-detects a workout like a walk or swim if you’ve started already but haven’t officially launched a workout on the watch. It will ask you if you want to start tracking it.)

After I finished with the bucket, it then noticed a transition time (or T1) of 9 minutes and change, as I left my apartment to grab that Citi Bike, which it estimated I rode for .9 miles. It then detected a transition time (T2) of less than a minute as I got off the bike and started walking home, covering a distance of .76 miles. Through the whole workout, I didn’t need to tell the watch I was switching activities. It just figured that out on its own. That’s different from other timepieces like a Garmin, which require button presses to switch between activities.

The touchless triathlon tracking is the timepiece’s marquis feature, and it works well. But it’s also a nice wearable for general workout tracking. The watch, and the corresponding app, are easy to navigate and feel clean. Four simple watch faces clearly show information like the time and date, the battery percentage, your heart rate, and step count. Pushing the center button on the right side brings up a menu of different workout profiles—you can set it to track speed walking (my go-to) but also others, like open water swimming, lap swimming, or running. If you want it to, the watch can display your phone’s notifications to its screen, but it’s easy to mute that by pushing and holding the top right button.

The watch is geared for athletes—especially triathletes—and its simple user interface speaks to a device that aims to perform well in a specific niche. And it’s comfortable enough to wear all day, as a regular timepiece.

There’s plenty it can’t do: unlike some other more robust outdoor-type watches, like a Garmin Fenix, you can’t pull up a compass. It won’t tell you the weather. The charging system it comes with feels somewhat clunky. There’s no solar charging. The buttons on the watch’s exterior feel a little cheap, but the rest of the build quality is fine.

But at $379, it’s priced reasonably when you consider the competition. It’s more affordable than models like the Garmin Forerunner 745, which is about $500.

Athletes who want to monitor their workouts—especially triathlons, of course—should strongly consider this wearable. Others who are looking for a more general, do-it-all smartwatch and activity or workout tracker should perhaps weigh other options. But serious triathletes may love it, and the watch will likely shine when put through a real test—a contest that involves actual swimming and running, of course.