Garmin Venu 2 review: An impressive fitness tracker that thrives outside the gym

Wear it inside the gym or out—this smartwatch packs powerful features into an attractive package. 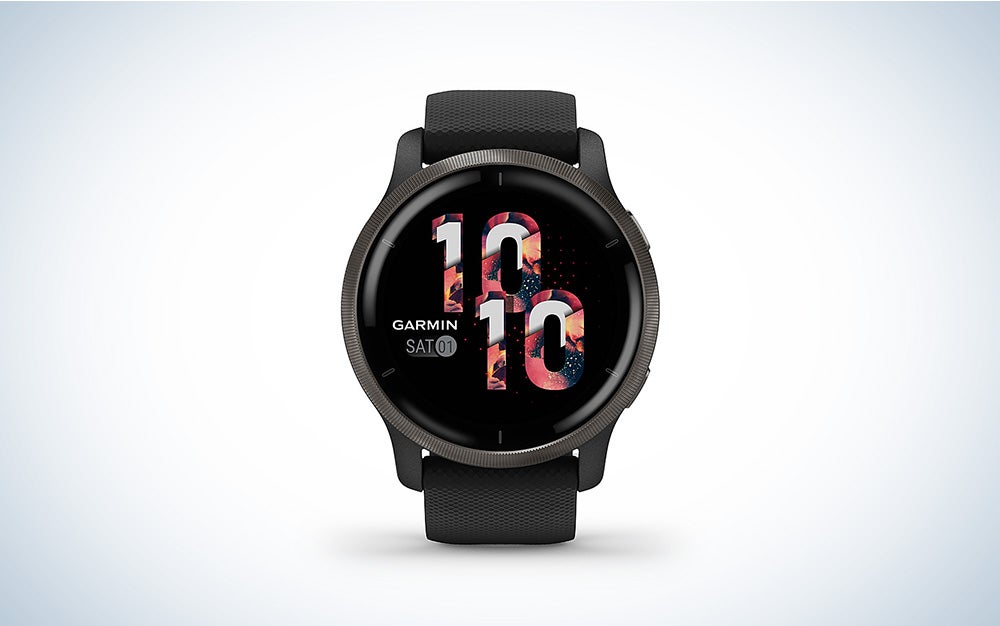 A stylish smartwatch for any type of workout. Best Buy
SHARE

Garmin makes some of the best fitness trackers around, but they sometimes give up serious style points in the name of functionality. Fortunately, that’s not the case with Garmin’s Venu 2, which was released in April 2021. It’s a wearable fitness and health tracker with GPS that not only tells the time, but it also monitors a wealth of biometric data, can plan workouts, play music, sync up messenger and calendar functions, and increase its functionality with downloadable apps. The Garmin Venu 2 features a gorgeous AMOLED full-color touchscreen, metal bezel, and interchangeable 22mm bands. It’s a powerful and classy upgrade to the original Venu that looks at home in the gym, but also won’t stick out like a sore thumb when the dress code calls for something more refined than fitness gear.

I wore the Garmin Venu 2 smartwatch for most of a month while jogging, bike riding, and packing up and moving to a new apartment (lots of heavy boxes). I’m also a professional cameraman and I never knew how many calories I burned just lugging gear until this Garmin smartwatch offered me insight into my daily activities. But I also wore it during less strenuous moments, like meeting with producers, talking to apartment brokers, and just going about my day. Through it all, I found the Venu 2 struck an excellent balance between functional and fashionable.

I was impressed by the Garmin Venu 2’s looks, with its polymer case and attractive ridged, metal bezel. It’s uncluttered and understated, with only two small buttons located on the side of the case. At 45mm, the watch follows the trend toward larger faces. While I didn’t find it uncomfortable to wear, it did trap sweat on longer, warmer days. Anyone with smaller wrists or who simply likes wearing smaller timepieces will want to check out the 40mm Venu 2S. Both have the same features.

Garmin knows how to build watches and, despite their minimalist look, the Venu 2 and 2S watches are durable and designed for tough workouts. They have a 5 ATM water-resistance rating and can withstand pressure equivalent to a depth of 164 feet—using the watch in the rain, snow, or shower, when swimming or snorkeling won’t cause any problems. The AMOLED screen is protected by Corning Gorilla Glass 3, the same material used on many smartphone screen protectors.

The Venu 2’s beautifully expressive AMOLED touchscreen really caught my eye. Bright and colorful, it displays a wealth of data that I had no trouble reading during workouts. However, that style comes at a cost—keeping the display active all the time will quickly drain the battery. Garmin promises the Venu 2 lasts 11 days in smartwatch mode but has just 22 hours of power in GPS mode, and 8 hours in GPS mode with music. And the Venu 2S should last about 10 days in smartwatch mode, 19 hours of power in GPS mode, and 7 hours in GPS mode with music. While I never took the watch into the backcountry, I did use it constantly over a four-day weekend, including some tracked fitness activities, and never found myself worrying it would die. If near that point, the Venu 2 can be set into battery-saver mode, which disables the “always-on” screen so it is capable of lasting longer without paring back on features or restricting monitoring; it just puts the display to sleep. (And 10 minutes of quick-charge can get you a day of smartwatch mode or an hour of GPS mode in a pinch.)

Also, as much as I loved all the bright colors, it sometimes felt like someone was throwing a rave on my wrist, so I decided to take advantage of some customizable displays that intentionally reduce the number of active pixels. This preserves battery life and makes the watch a bit more subtle. A handy low-power mode darkens the screen when not in use. Some people might like that, but after testing it for a couple of hours, I decided it was a bit too subtle.

Garmin put a lot of thought into the Venu 2’s user interface, and I was impressed by how easily I navigated its features using an intuitive swiping motion. Nice bonus: using it on a rainy day or when sweaty didn’t get in the way of the touchscreen’s sensitivity.

The Venu 2 is available in slate or granite blue, while the 2S comes in graphite, light sand, mist gray, and white. The 2 uses a 22mm strap, and the 2S has an 18mm strap; both are easily replaced with the many, many options (of various materials, colors, and prices, starting at $29.99) available through Garmin and third parties.

Setting up the Garmin Venu 2

I had no trouble getting started with the Venu 2. Before anything, I used the included USB cable (featuring a proprietary port, so don’t lose it) to charge the watch, which comes partially charged. It doesn’t include a wall adapter, so you’ll need to supply your own or plug it into a computer. Once the watch was topped off, I downloaded the free Garmin Connect app to my phone (there are versions for both iOS or Android), and created an account.

The app automatically synced with my watch via Bluetooth and walked me step-by-step through the set-up process. If this is your first time using the app, it establishes baseline biometric data like height, weight, stride length (all of which I had to double-check for accuracy), and heart rate in order to better track your fitness later on. I was testing another Garmin running watch and, once my account was set up, I was able to switch between the two, synching data to each, with the touch of a button. By connecting to my phone, I also gained control over my music, messages, calendar notifications, and news apps. The Garmin Connect app also provides access to an entire online community and opens up additional layers of customization.

Moving to a better Venu

Like the original Garmin Venu, the newest version monitors heart rate, Pulse Ox (to spot-check blood oxygen saturation), respiration, stress, step numbers, and sleep patterns. Not surprisingly from a company known for its navigation systems, the Venu 2 has an excellent GPS with GLONASS and Galileo options. When synced to your iOS or Android smartphone, it delivers messages and notifications, provides control over your music, and interfaces with the powerful Garmin Connect app for greater health metering and feedback.

The watch now uses Garmin’s Elevate V4 optical heart-rate sensor and has two sensors to increase the accuracy of the pulse oximeter. Those fancy AMOLED graphics benefit from a more robust processor and GPU. The Garmin Venu 2 has a larger display area than the original, as well as more storage for downloaded music (increasing from about 3 GB to 7 GB). Widget Glances provide snapshots of biometric data, sleep tracking has improved, and there’s also a new strength-training profile that includes a muscle map for planning workouts, as well as added activity profiles.

I often feel like I’m running on fumes. It’s part of an unhealthy pattern of staying up late, waking up early, and pushing myself hard during the workday. The last month wasn’t helped by a move to a new home and a return to film production now that I’m vaccinated. So I was particularly intrigued by something called a “Body Battery” energy score. The Garmin Venu 2 combines a variety of metrics—including heart rate, stress levels, activity levels, and quality of sleep—to estimate my energy reserve throughout the day. If the number is low—like mine was—it suggests that some lifestyle changes might be in order. In my case, the sleep tracker suggested that I needed more time in the sack. Seeing it graphed out in glorious color, and looking at some of the correlating health metrics, hammered home the point and helped motivate me to do something about it. (Less caffeine in the evenings, for starters, combined with better time management.)

Workouts are always easier when you’ve got a cheer squad at your back, and the Garmin Connect app helps provide this by gaining wearers access to an online community. I linked up with some friends who also wear Garmin watches and we were able to compete in challenges and track each other’s progress. We decided to keep it easy and compete for the most number of steps, and it was great motivation to get off the couch and engage in a little friendly rivalry.

A feature called Garmin Coach downloads training plans for people at any level of experience, and this is the first Garmin watch to provide muscle-map graphics to help illustrate and reinforce what groups you’re working at a gym. Swimming buffs will love that the watch provides underwater heart-rate monitoring and stroke detection.

So who should buy it?

The Garmin Venu 2 smartwatch is the best Garmin GPS watch for people who want a full-featured fitness tracker and sports watch that looks as good on a night out as on the playing field. Its intuitive interface is easy to use, and it comes with a full flight of features that compete with any other fitness tracker. With an MSRP of $399, the Venu 2 costs the same as an Apple Watch 6, but can sync to Android phones, meaning it won’t limit you to Apple’s ecosystem. For some people, that alone makes the Venu 2 a must-have over any wearable made by Apple. However, even some Apple loyalists may be swayed by the Garmin’s sharp looks, and large, colorful screen. In fact, as an Apple fan myself, I found the Venu 2 to be a stylish, versatile smartwatch that I enjoy rocking on my wrist.

Brian S. Hawkins is a journalist and documentary maker who focuses on technology and pop culture. He has contributed product reviews and recommendations to Popular Science since early 2020.