At ease on unsteady seas 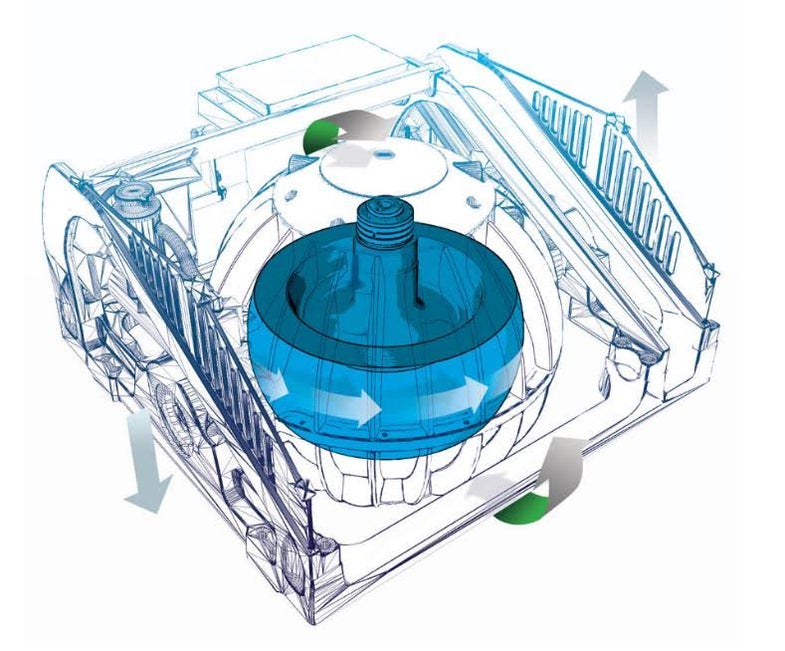 On rough seas, a boat’s rocking can be more than uncomfortable—as “Deadliest Catch” participant Johnathan Hillstrand told the Seattle Times after a close call, “man overboard” is something you never want to hear. “We hear it too much,” Hillstrand said, during a season that had already seen three fishermen perish. In wet weather and white water, stability can be a matter of life and death.

That’s why many vessels now use gyroscopic stabilizing mechanisms.

By themselves, gyroscopes are not a new technology—a sickly Frenchman who failed to become a doctor invented them in the 1850s. Leon Foucault had a short-sighted eye and hated school. “His health was delicate, his character mild,” wrote a childhood friend, “timid and not expansive.” He preferred to play with machines. His mother forced him into medical classes, where he performed better than anyone expected—until he saw his first blood and fainted.

But in 1851, Foucault had the idea he could show the Earth’s rotation. In his basement, he constructed a pendulum that could move in any direction, set it swinging, and watched as it kept to the same plane while the Earth moved beneath it. Scientists were so struck by the discovery that he was asked to repeat the experiment in front of the entire Paris Observatory.

It was a short step from there to the gyroscope, Foucault’s next invention to demonstrate the motion of the Earth. A gyroscope is a spinning wheel, called the rotor, that rotates around an axis. The rotor is mounted between two rings, known as gimbals, that pivot around their own axes. This means that when pressure is exerted on the gimbals, the rotor is unaffected, making it a useful tool to measure compass headings and pitch, roll, or yaw angles—useful for sailors trying to find the horizon on a foggy morning, or in a spacecraft headed to the ISS.

Gyroscopes are still used in many important tools, like the Hubble Space Telescope, racecars, airplanes, and cell phones. (Ever wonder how Pokemon Go’s augmented reality actually works? Your iPhone uses the camera and the phone’s gyroscope to display an image of a Pokemon as though it were in the real world.)

In a boat, the natural rocking of the water moves the spinning gyroscope, producing pressure known as torc. “As the boat rolls, the gyro tilts fore and aft,” says Andrew Semprevivo, Vice President of Sales and Marketing for Seakeeper, the maker of one of these stabilizing gyroscopes. The stabilizers use the energy produced by pushing the spinning gyroscope off its vertical axis to correct the boat’s heel. It’s basically the same principle behind a surfer adjusting his body’s position on his board to match a wave’s surface.

To illustrate, here’s a simulation of how a small boat would bob without the stabilizing gyroscope:

And here’s that boat with the stabilizing gyroscope:

The problem, though, is that until recently, gyroscopic stabilizers were monstrous machines, weighing about 100 tons. Their power is dependent on how fast the wheel spins, or heavy the wheel is, or how large the diameter is. So the units were bulky and required a lot of power, limiting their use to larger boats. In the 1970s, fin stabilizers were invented as an alternative for smaller vessels—imagine a canoe rapidly moving oars in and out of the water to keep the hull from tipping. But fins, while effective, require a lot of power, and naturally create a good deal of drag. So in the early 2000s, Seakeeper decided to try to create what then seemed impossible: a gyroscopic stabilizer for small vessels.

To scale the gyroscope down, they enclosed the entire machine in a vacuum to reduce friction, making it about the size of an air conditioner. It depends on a closed-loop cooling system that flows on the top and bottom of bearings with cooling collars, pulling the inevitable friction’s heat from the bearings before it vaporizes the lubricating grease. Because it’s running inside a vacuum, a system capable of stabilizing a 60-foot boat uses about the same energy as a hair dryer. Seakeeper now makes a unit for 30-foot boats, the smallest such stabilizer in the world.

“We’ve had some push-back,” Semprevivo says, citing the chin-up tough culture many marine activities sport. So they offered a free trail to the boats that service wind farms in the North Sea, some of the roughest waters in the world. “They said, ‘We don’t want it.’ We said, ‘Just try it.’” When Seakeeper took the machines back, “the crew essentially went on strike. They bought units for the entire fleet.”

The technology has also become popular on recreational vessels. As you might imagine, this kind of reduction in roll helps dramatically with motion sickness. That’s useful, as a recent study published at PubMed suggests that as many as 27 percent of women and 16 percent of men get seasick. “Seasickness used to be considered part of life on a boat,” Semprevivo says. “We hope to change that.”

MJM Luxury Yachts have become the first company to make Seakeeper’s stabilizer automatically included. “It’s in the DNA of our brand to offer it as standard,” says Christopher Hughes of MJM Yachts. The stabilizers reduce roll by up to 90 percent, which can sometimes give an eerie impression of stillness. He was recently in one of the company’s yachts, for example, as a spectator boat during a sailing race in rough conditions. They were so still, “One of the committee boats came over and said, ‘Looks like you guys are aground!”

Seakeeper’s still working on scaling the stabilizer down to make it useable in boats of every size. “Every ounce of energy is in refining and scaling the product down to 20-foot boats,” Semprevivo says. While the early adapters might be luxury vessels, the company is seeing an uptick in commercial adoption too.

Widespread usage of stabilizers, Semprevivo hopes, will help improve safety conditions on the sea. Just ask Josh White, who plunged into the Bering Sea a few years ago while “Deadliest Catch” was filming. Some 266 miles from land, 15-foot swells kicked up, rocking his boat. He was standing beside a pile of crab bots when suddenly he felt himself slipping. “I tried to get a good grip, but I couldn’t. Before I knew it, I was gone.” White plunged into 36-degree water. He would have been dead in minutes if his crewmate hadn’t been able to react quickly to rescue him.

That’s just the situation Seakeeper hopes their stabilizer can avoid. “We have an opportunity,” Semprevivo says, “to see what our product can do.”