Tech can make your conversations with kids way more effective

In a classroom at a transitional housing program in San Mateo, California, Brianna is talking about her 2-year-old daughter, Hope.... 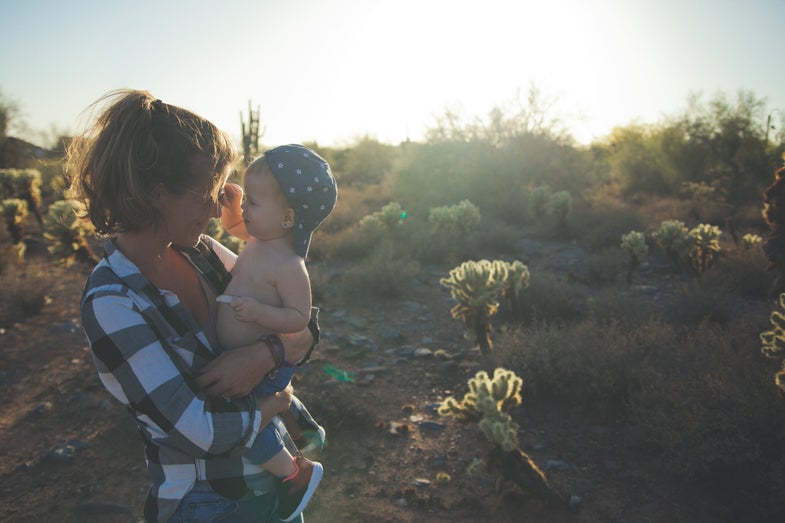 In a classroom at a transitional housing program in San Mateo, California, Brianna is talking about her 2-year-old daughter, Hope. She’s having trouble getting Hope to talk to her—but the toddler is perfectly happy to converse with the television while she watches Little Einstein.

Hope is in the classroom, too. So are five other parents, and a few more young kids. As Brianna talks, Hope bangs a spoon on a table. She puts her face close to two-month-old Javier, touching his black hair and trying to hand him a toy.

Joanna, a facilitator from the San Mateo library system who leads the class, gently reminds Brianna to follow her daughter’s lead in conversations—and try to think about reading books as an activity instead of watching television. Joanna and the other librarians leading the class take care to point out the places where parents are succeeding in engaging their tots, and encourage them to think about how to do more of that.

Thick, glossy handbooks are on the tables, written half in Spanish and half in English. Together, the parents watch a video that reminds us to follow our child’s lead in games and songs. It’s a class for parents who want to read, sing, and play with their kids more—not to keep them amused and occupied, but to encourage the best possible cognitive development.

The facilitators hand each participant a paper report outlining weekly progress speaking with their child. Each week, the families record all their conversations for an entire day. After turning in the recorder, they receive information on how many words the child heard, how many words the child spoke, and the minutes of electronic media the kid consumed.

A dad looks disappointed when he sees the amount of time his child has been watching a screen. “I feel so bad! I just give her the iPad,” he says.

I look down at my own paper and start to wonder about the bar representing my 7 p.m. story time with my 3-year-old.

Long before the first dada, a baby is soaking up language and developing skills for rudimentary conversation, and for decades scientists have studied the word soup in which babies swim. A breakthrough came in 1995, when two pioneering researchers from the University of Kansas—Betty Hart and Todd R. Risley—found that the more families talked to their babies and toddlers, the more likely they excelled academically later in life.

Some 85 percent of brain development happens in those first three years of life. Children who hear more words can process language faster in school, so they are more successful with academics. By the age of five, children from the most verbal families have processed at least 30 million more words than kids from the least verbal families. It’s called the “word gap.”

When parents talk to their children only a little, the researchers found, most of that language is devoted to the business of life: Don’t touch that. Get that thing. But when parents talk more with their kids, the topics are varied and richer. They tend to discuss how water boils when making dinner, or the relative size of a teddy bear and a cat. Nothing is off-topic when conversing with young kids.

Hart and Risley’s research inspired a number of other scientists to get parents—especially low-education, low-income ones—to speak more to their young kids, and use high-quality words with them.

Reading their book of research—culled from one-hour recordings of interactions in 53 homes, taken once a month for three years—I immediately wondered where I fell on the range of talkers. Most parents think they’re talking to their kids. I definitely did, both to my chatterbox 3-year-old and my squeaking infant. But how could I know for sure?

Parents and non-profits are turning to technology to help them understand what children are actually hearing. A non-profit called LENA (Language Environment Analysis) makes a pocket-sized recorder that slides into specially-designed overalls. It records all the words that surround a kid over the course of a day.

The data is uploaded to a server, where LENA’s algorithms parse the language and deliver a report to parents with information on the number of words spoken by adults, utterances by the child, number of conversational turns, the amount of screen time, and tips on places to improve.

The recorder is used by language scientists around the country, but LENA is taking a more direct approach, too, offering its own class through library systems. Each eight-week course teaches parents about the word gap and child brain development, and offers tips for reading, singing, and talking to their kids. Along the way, parents use the reports from their own recordings as a guide.

For two Saturdays last fall, I coaxed my toddler into wearing a vest with a pocket to hold the LENA recorder. I pressed record when we started our day, and the recorder captured all our conversations. According to my results, he’s hearing between 13,000 and 16,000 words per day. The average child hears about 12,000.

But conversational turns—the number of times a conversation volleys back and forth—are just as important as word count. For toddlers, these turns form the core of language learning, say the researchers, because they signal engagement.

For certain times of day, like bedtime, our word counts were high, but our conversational turns were low. That meant I was talking at my son, the class leaders said, instead of with him. And who could blame me? I’ve read Cat in the Hat 8,000 times, the last thing I want to do is discuss it at length.

After nine years of baseline studies, Gilkerson says the LENA database also can offer other insights into family dynamics. For example, more money does not equal more talking. “There is so much variability in these groups,” she says. “It’s not the case that every low socio-economic status family doesn’t talk to their kids. And there are lots of high-income families that aren’t talking much to their kids.”

Research shows that when parents make an effort to increase the number of words and turns, the quality of vocabulary and conversation also increases. And LENA’s outcomes for the past two years have been positive—graduates from 2015 and the spring of 2016 programs increased eight points on a child language development scorecard between baseline and graduation, which corresponds to a move from around the 40th percentile to the 61st percentile.

Still, other researchers wonder if focusing on counting words is the right way to go.

In Houston, a program called e-PALS (Play and Learning Strategies) pairs families with remote coaches who help them improve conversational skills. The families use netbooks to review lessons and record themselves working on a skill like paying attention to a child’s signals, asking open-ended questions or using descriptive labels instead of empty language. Then, the coach and the parents review the recording together.

When parents see themselves on video, they often start to realize they could be doing some things differently, says Ursula Johnson, Assistant Professor of Pediatrics at the Children’s Learning Institute at the University of Texas Health Science Center at Houston, who works on the program.

For Johnson, the quality of the language always overrides the quantity. It’s not necessarily about talking more, but rather tweaking “interaction style.” This can be a challenge with families who aren’t used to playing with their kids, or who find it strange to have chats with a pre-verbal child, who might seem as witty as a potted plant.

Both e-PALS and LENA hope to expand in the near future. Meanwhile, other child language-monitoring tech is being integrated into smartphones.

After attending the LENA class, I visited the Menlo Park headquarters of a startup called Versame. The company makes a flexible silicone chip called Starling that can be clipped on kids’ clothing and records input within four feet of the device. The Starling, which sells for $199, analyzes the number of words a child is exposed to in real time to and transmits metadata to a parent’s smartphone. It also offers tips and prompts on how to converse with young kids.

Unlike LENA, the Starling only counts the number of words, not conversational turns. Founder Jon Boggiano says the device is to designed to give parents info quickly, so they can change their behavior while it still counts. That’s how he uses it with his toddler, the youngest of his three children. “The data keeps me mindful of how distracted I am by other technology like my phone or computer,” he says. At the end of a day, he’ll check his word stats and read extra stories if the numbers aren’t what he wants.

As the connection between language skills and academic excellence becomes common-knowledge, parents are happy to distill best practices from pedometer-like language trackers. As for me, I’m taking things one suggestion at a time. First up: encouraging my opinionated toddler to butt in on his bedtime stories.