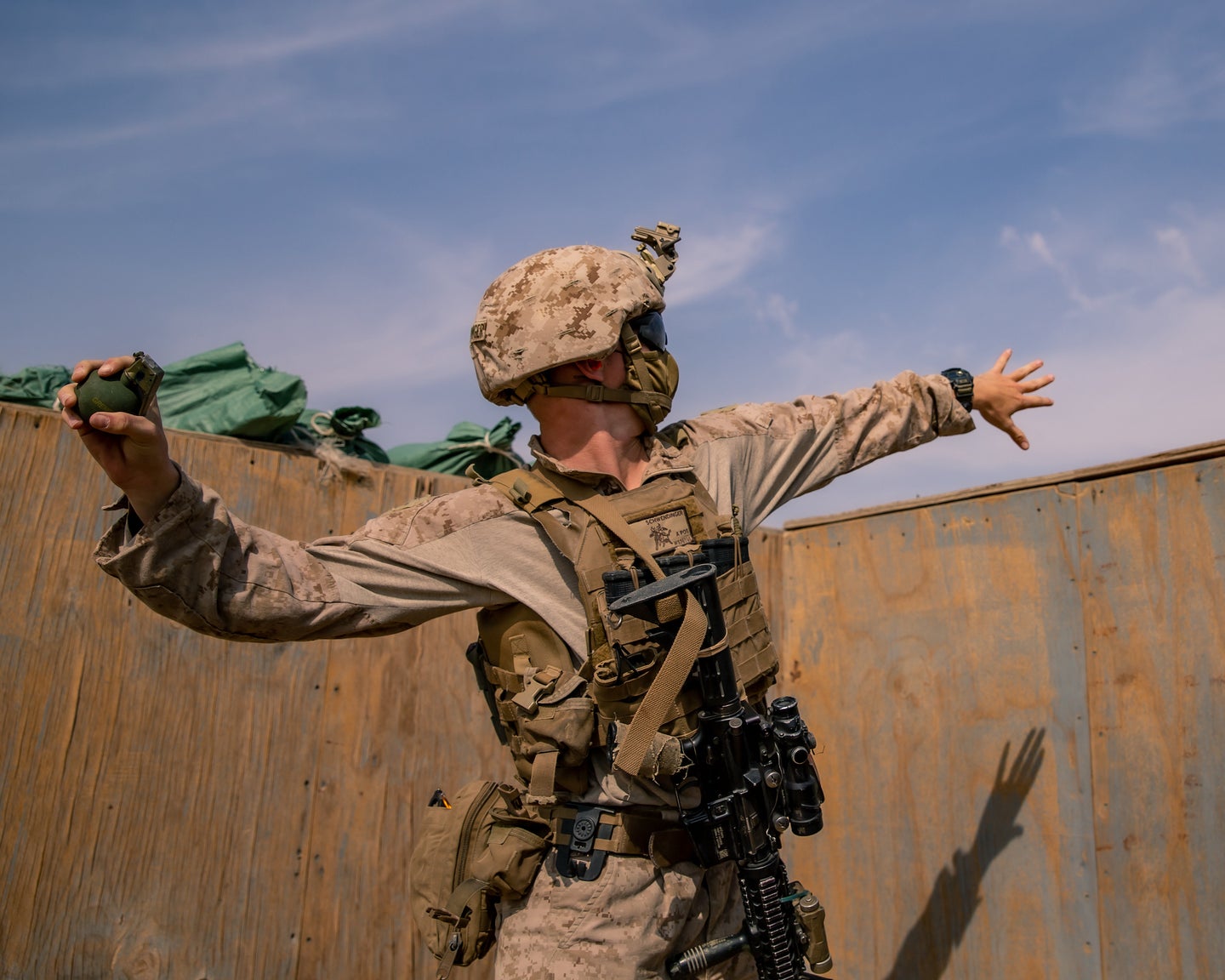 A Marine tosses a grenade during an exercise in Kuwait last year. Lance Cpl. Andrew Skiver / US Marine Corp
SHARE

Every explosion is an event rich with data. The challenge is capturing that fleeting and violent information and rendering it sterile and useful. Announced in February, the US Army has a new tool to better capture the data from explosions, at least from practice battlefields.

The trajectory of a bomb, the scattered patterns of its shrapnel, the peculiar shape of its crater, even the holes it tears into the body armor of a person unfortunate enough to be nearby—every part of the aftermath is information, if only it can be recorded.

The novel tool collecting this information is dubbed the Fragmentation Rapid Analysis Generator using Computed Tomography (FRAG-CT). It is designed to streamline the collection and analysis of explosion data, and then create useful files for further research, Lisa King-Schiappa, the lead of the team that designed FRAG-CT for the Army’s Development Command, said in a statement.

With better, faster analysis, the Army can use that information to design new armor—and new bombs.

What is FRAG-CT, and how does it work?

The FRAG-CT method creates a data file of the bombs’ “fragmentation characteristics,” as well as a data file that can be used to design armor. In addition, it creates 3D files of each scanned fragment, which can be used in future analysis. Most notably, the Army claims that this analysis process is 200 times faster than collecting data by hand, allowing analysis time to shrink from “months to hours.”

[Related: Can an algorithm find artillery craters in satellite images? ]

A manual from the Department of Defense Explosives Safety Board called “Procedures for the Collection, Analysis, and Interpretation of Explosion-Produced Debris” outlines exactly how much work goes into the traditional hand-cataloging method. This collection includes plotting out where each piece of debris falls, weighing it, describing its origin, and more.

It is not yet clear how, exactly, FRAG-CT will reduce the work of picking up and weighing individual debris pieces. The software as described can take in multiple data inputs, suggesting it would work with sensors and cameras.

How will it help the Army?

A better understanding of explosions can improve the design of both munitions and armor.

“Warhead development is an iterative process from design to prototype to testing and back to design,” Henry Hsieh, a mechanical engineer in the DEVCOM Armament Center, said in the press release. “This process is often cost prohibitive due to the time and labor required to collect and analyze vast amounts of data after a destructive warhead event. With this technology in place, warhead developers can rapidly and confidently design munitions adapted for our next generation of warfighters.”

Warhead design combines material science with a strong drive towards space efficiency. For a bomb to be useful, it needs to remain inert until deliberately armed, it needs to cause an explosion of a useful size, and it ideally uses the minimum amount of material to make all that work. After-effect analysis can let engineers know how much of the case was burnt in the blast, how much launched outward as shrapnel, and what sort of damage the blast caused. This can be applied to every kind of blast, from a grenade to an artillery round or a plane-dropped bomb.

Understanding the exact impact of a bomb on its surroundings, in useful detail and easily processed data, can also improve the design of armor.

Mike Maffeo is a senior engineer with DECOM who works on armor design for soldiers on foot. He said: “FRAG‐CT looks to be a real game changer in getting new fragment files quickly for armor assessment and vulnerability analysis. With all the data that is being collected by FRAG‐CT, it opens opportunities to increase the fidelity of the modeling and analysis.”

For now, the application of FRAG-CT seems limited to tester exercises and controlled explosions, rather than actual in-field analysis. But, using software to shorten the time it takes to understand a blast will improve weapon and armor design now, and likely suggests that future data analysis tools could see use beyond the laboratory setting.