2019 was a terrible year for farmers, and climate change will only make things worse. 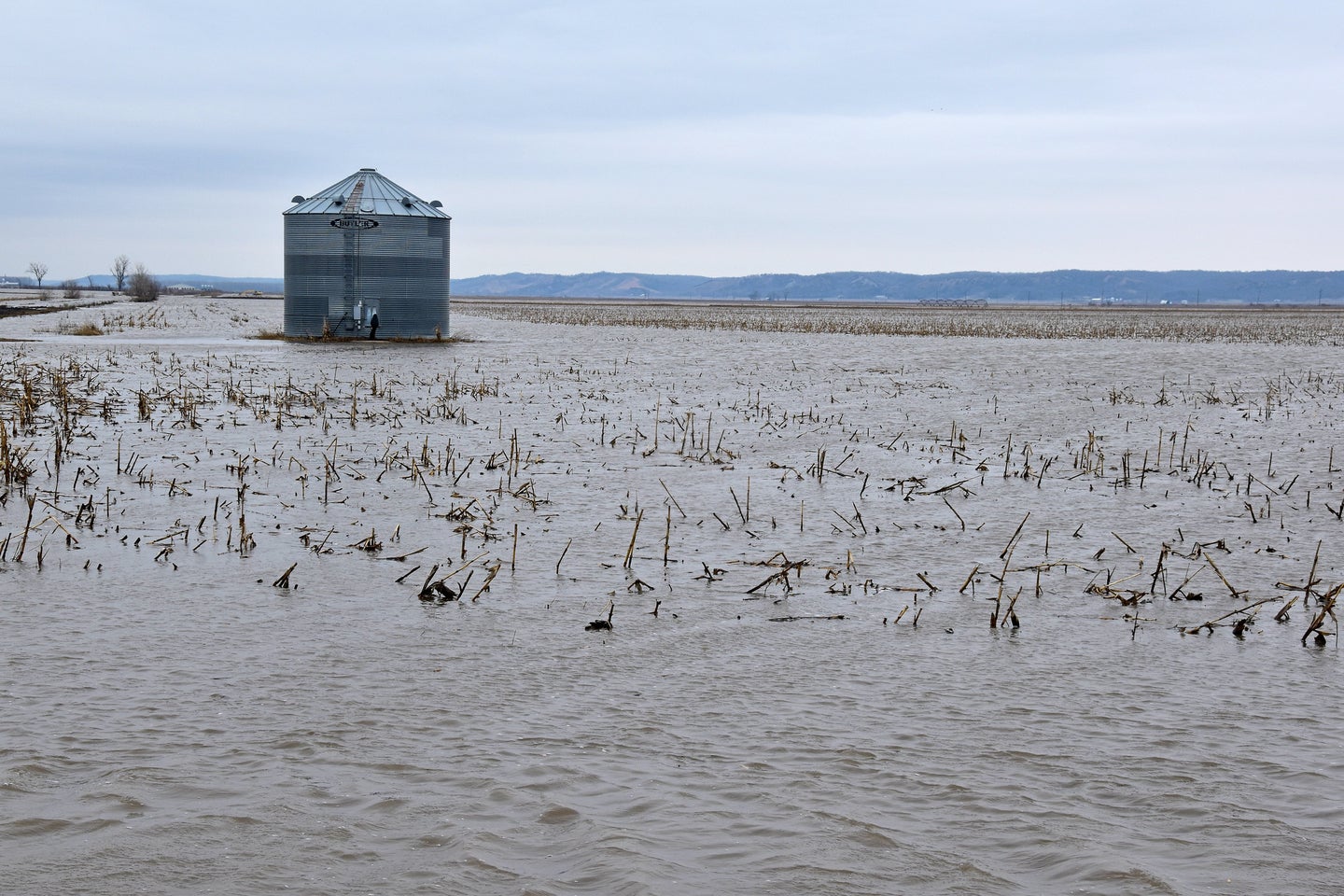 In the Mississippi River Valley, heavy spring rains devastated 250,000 acres of farmland in 2019, causing Governor Phil Bryant to declare the floods a historic disaster on par with the infamous 1927 floods that left the region under water for months. In the Texas Panhandle, farmers compared the dramatic impact of the rain and flooding to the effects they felt from the 2011 drought— the driest year on record for the state.

South Dakota was hit particularly hard, experiencing one of its wettest years since 1915. Warmer temperatures that might otherwise have been suitable for planting gave way to heavy rains over the summer which ruined what had been planted. The record-breaking spring rains were followed, months later, by record-breaking rainfall in September that wiped out what was left of the corn and soy crops, and damaged crucial roads and infrastructure in rural communities. “It’s almost Biblical out there,” one farmer told UPI.

According to the United States Department of Agriculture, heavy spring rains across the nation in 2019 caused nearly 20 million acres of farmland to go unplanted. Farmers incurred, collectively, billions of dollars in losses, disrupting rural economies across the country as well as the communities they support. Last year was both the second hottest and second wettest year on record, according to the National Oceanic and Atmospheric Administration. The Mississippi River, Arkansas River, and Missouri River all flooded in 2019, and each ranked on NOAA’s all-time list of billion-dollar weather and climate disasters.

“Normally, rainfall is welcome here,” Jourdan Bell, a professor and agronomist with Texas A&M’s research center in Amarillo, says. “We’re in a semi-arid environment, with about 15 to 22 inches of rain yearly. But too much rain is like a double edged sword.”

The cotton crops that are common across much of the Texas panhandle have a narrow planting window, because they need to be planted in late spring or early summer, so they can mature before the first freeze that usually occurs in October. With the extremely wet and rainy spring season this year, soils were too waterlogged and compacted to start planting— and so farmers weren’t able to plant early enough to avoid hitting the fall freeze. “It’s always been a climate of extremes in the Panhandle,” says Bell. “But in recent years, the extremes are more frequent.”

And that might become the new normal across the United States, as climate change intensifies extreme weather events. When the atmosphere heats up, it can hold more water vapor. And more water vapor means more rain and storms. Even for colder regions of the county, like the upper Midwest, that can spell trouble; storms usually form over the much warmer Gulf of Mexico and unleash the downpour as they move North. A 2019 study from researchers at the University of Illinois analyzed the USDA’s crop insurance program and found that these excessive rains can be just as damaging for crops as extreme heat or drought.

“I was surprised that last year was so much of a perfect storm,” says Donald Wuebbles, a professor of atmospheric sciences at the University of Illinois, who worked on the 2018 National Climate Assessment, a congressionally mandated report, produced every four years by various government agencies and scientists, on climate change impacts. The scenario in 2019 tracked closely with what Wuebbles and the authors of the report laid out: agricultural production will likely drop as the weather swings from too much rain in the spring to too little in the summer. Waterlogged soil during planting season might prevent planting altogether, and the seeds that are planted might not germinate. Hotter temperatures in the summer bring more diseases and pests, and whatever moisture might have been stored in the soil will evaporate as drought creeps in. And as crop production is impacted, the food security of millions of Americans—and millions more across the globe who rely on American imports—could be threatened.

“Models are tools to understand a system, and if anything, they typically tend to underestimate. That’s the scary thing to me—this may intensify more,” Wuebbles says.

The cycle of extremes is also exacerbating existing environmental stresses. In the Texas Panhandle, for example, the Ogallala Aquifer that feeds much of the region is virtually impermeable, and recharges so slowly that it could take more than 6,000 years to fill up naturally if it were depleted. Nine years ago, during the 2011 drought, the demand for water was lower, and the aquifer itself held more water, Bell says. But today, as droughts become longer and more intense— and as the demand for water is driven up by a growing population— that’s no longer true. Cotton crops are drought tolerant, but the uncertainty of spring rains, summer droughts, and fall freezes might require farmers to shift towards other crops in order to stay profitable.

“There will be a record number of insurance payouts this year,” says Jennifer Fahy, the communications director for Farm Aid, a nonprofit that delivers relief aid to farmers across the county. “But that by no means reimburses the total loss that farmers face.” Some farmers are facing multi-year losses—those who stored grain on their land, waiting for higher prices once the U.S.’s trade war with China was resolved, lost the reserves as well, when the floodwaters damaged storage facilities. Farm Aid saw an unprecedented rise in the number of emergency assistance grants it issued this year—money that helps farmers keep the lights and heat on.

But of the farmers that Farm Aid works with, those who were able to implement soil conservation methods, like growing cover crops to prevent erosion, were able to bounce back a bit faster than most. And the National Climate Assessment suggests that the only way for most farmers to be able to weather the changing climate is to double down on such sustainable practices: from integrating climate models into planting and harvesting timelines, to high-efficiency irrigation technologies, to no-till farming which retains soil moisture and reduces erosion. Sustainable farming can also serve as a carbon sink, trapping greenhouse gases below the soil while simultaneously nourishing it. The NCA report also recommends policies that help rural, agricultural communities access the internet—and the plethora of resources and climate research available—which could empower people to face the coming decades of climate change.

“We always [read in the media] that farmers don’t believe in climate change,” Fahy says. “But they see these changes first hand, and [the flooding] has created the space for conversations about resilience.”

Note: this article has been updated to clarify a quote, and to correct the time of year that cotton crops need to be planted.