New Test Could Tell Whether Comatose Patients Will Wake Up

The secret is in the brain's sugar consumption 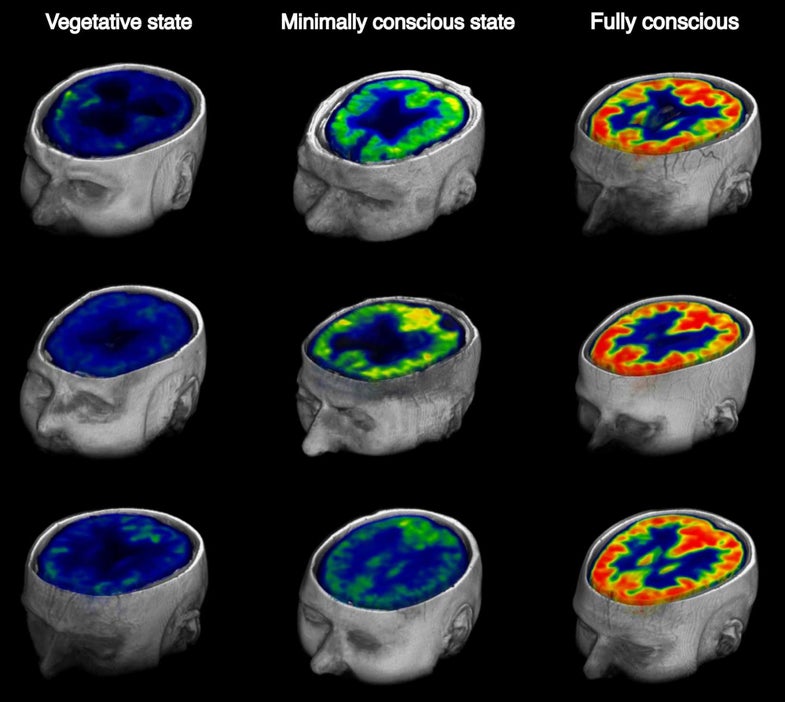 These PET images show the glucose consumption of the brains of patients ranging from vegetative to fully conscious control subjects. Those with less consciousness are shown to metabolize less glucose. Image by Stender et al.
SHARE

To determine whether a patient that’s in a coma will awaken again, scientists have devised a new test using positron emission tomography (PET).

In the study, the researchers used fluorodeoxyglucose PET to show how concentrated glucose is in the brain tissue. This is one way to determine metabolic activity. Using this metric, the scientists were able to differentiate between brains in different states of consciousness. The method was tested with 131 patients with a “disorder of consciousness”–which can vary in severity from completely comatose to conscious but not responsive–and 28 healthy patients serving as controls.

“The take-home message [for now] is that consciousness is a highly energy demanding process, involving the brain at large,” one of the study authors Ron Kupers said in a press release.

The researchers claim that this data could help doctors distinguish between minimal consciousness (which is when a patient shows some signs of awareness) and a vegetative state with an 89 percent accuracy. Knowing beforehand how likely a patient is to recover from a coma or other minimally conscious state can also help doctors and family members plan for the future.

“In short, our findings indicate that there is a minimal energetic requirement for sustained consciousness to arise after brain injury,” said Kupers.

The next step is to verify these findings with another patient population, and take a longer term look at how the glucose metabolism changes over time.